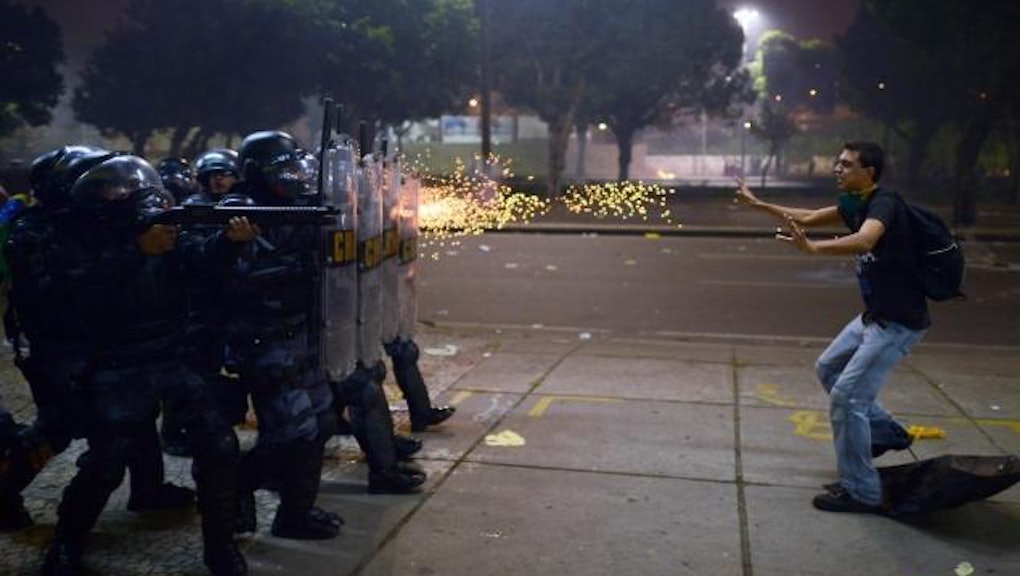 These Photos Being Shared From Venezuela Are Fake

There have been some powerful images coming out of Venezuela over the past week. Massive anti-government demonstrations have clogged the streets of major cities, and clashes between law enforcement and protesters have resulted in injury and even death. Shocking photos of the violence and unrest have quickly disseminated under hashtags like #SOSVenezuela and #PrayforVenezuela.

But all is not what it seems. A slew of phony images has emerged since the protests began, some of which have been shared thousands of times. Though it is impossible to know the extent to which these hoaxes have fueled the conflict in Venezuela, they demonstrate that social media are fertile ground for spreading rumors and hysteria.

In other cases, images of Venezuela's past demonstrations are being recycled.

Many of these false images are spread, presumably, by unsuspecting parties. But there are also examples of people intentionally posting photos for political gain, or simply for attention.

So while the protests in Venezuela have served as yet another potent reminder of the watchdog function of social media – especially in countries with stifled press freedom – they have also exhibited the susceptibility of these online tools to misinformation.

This phenomenon is hardly limited to Venezuela. RT reports that in the Ukraine, doctored photos of the Statue of Liberty and the Christ the Redeemer basked in blue and yellow light were circulated as proof of foreign solidarity with the country’s protesters. The outlet also asserts that rumors of imminent Russian invasions have repeatedly spread through protestors' social media, stoking already high tensions. Two years ago in India, fake pictures and messages of looming attacks in one area caused mass panic among migrants fearful of sectarian violence. The resulting chaos led to deaths and injuries.

In the United States, social media hoaxes are common, though typically benign. A tweet erroneously attributed to Paris Hilton that confused Nelson Mandela with Martin Luther King Jr. made the rounds last year, as did a fabricated battle between two disgruntled plane passengers flying home on Thanksgiving.

But even in our own country, we have already seen how destabilizing false information has become. When the AP’s Twitter account was hacked last year, a tweet was sent saying the White House had been bombed and the president injured. The news sent the stock market into freefall. While the error was corrected only minutes later, the episode was a sobering reminder that just 140 characters, when sent from the right person, can instantly erase billions of dollars from the U.S. economy. Americans have also been particularly gullible when it comes to photos of natural disasters.

The past few years have powerfully demonstrated how new forms of communication are reshaping global governance. But in times of protest, where emotions run high and herd mentality prevails, it is not difficult to imagine a situation in which fake photos or misinformation are used as a justification for violence. Let us work to ensure that social media continue to be a force for democracy and accountability, not chaos.