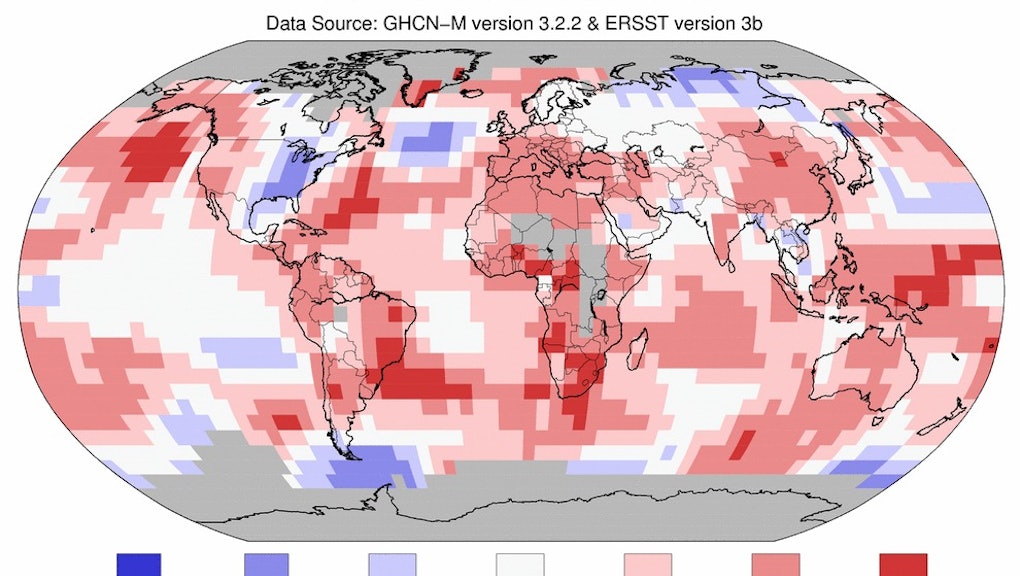 Even With the Polar Vortex, Last Month Was One of the Warmest Januaries on Record

"If global warming is real, then why is it snowing outside?" the Fox News anchors of the world echo with glee, pointing at a stretch of freezing cold and huge storms that's not even over yet.

Well, spoiler alert: It is warm. Just not in the eastern United States.

Temperatures around the world have been unseasonably warm this January — about 1.2 degrees Fahrenheit higher than the average for the 20th century, according to the National Oceanic and Atmospheric Administration (NOAA). Despite record-setting snowfall and cold across the eastern half of North America, worldwide it's been the fourth-warmest January since records started being kept in 1880.

Temperatures in France, for example, are tied for the warmest in recorded history. Australia is undergoing a massive heat wave, with a highly damaging fire season this year. The U.K. had its third wettest January, resulting in massive floods. And California remains much warmer than usual and is experiencing a drought that may cost state coffers $687 million.

This year "also marked the 38th consecutive January and 347th consecutive month (almost 29 years) with a global temperature above the 20th century average," according to NOAA.

As the Washington Post's KnowMore points out, the map shows why it's particularly important when making conclusions about climate patterns to look beyond the local weather and see larger trends. Otherwise, you run the risk of being the one who claims global warming can't be real because it's cold outside. And check this chart out showing that while record cold snaps still happen, they're happening much less frequency on average.

Further, some scientists think that global climate change and record snowfall could be linked through disruptions in the jet stream, causing seasonal weather patterns to linger.