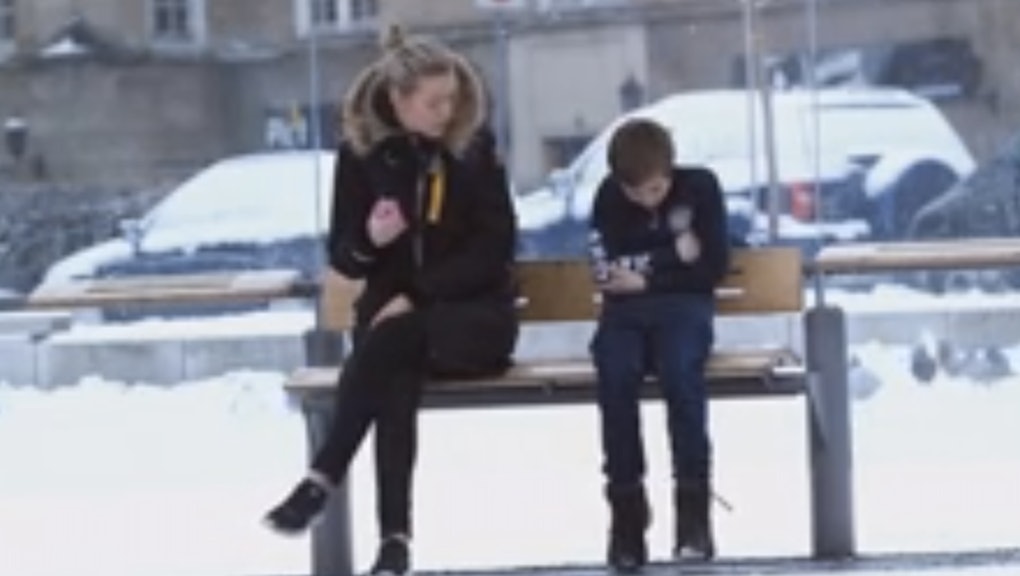 WATCH: Social Experiment Looks at Whether or Not Bystanders Would Help a Freezing Child

Syria's winter is taking on new meaning as millions of people, including children, freeze without access to heat. Temperatures are dropping to the 30s at nightfall, and with frequent rainfall during the winter, many children without proper clothing are suffering. One nonprofit decided to do something about it by starting a simple campaign to get Syria's children proper jackets.

"Would you help a freezing child in need?" That's the simple question posed by SOS Mayday, a nonprofit that helps children in emergency situations. Launching a covert social experiment, SOS Mayday had a child actor sit at a bus stop in Norway without a jacket, visibly cold and uncomfortable. Did people notice the child? Did they help him?

To restore your faith in humanity, yes, bystanders helped. One by one, the onlookers gave the freezing boy their scarves, gloves and jackets. But the message was about more than offering random acts of kindness. Viewers feel uneasy when they realized this is what's happening in Syria to millions of children. The simple campaign enables people to donate via text message or online to children in need. It has reaped success so far.

So far over 2 million children have thanked the nonprofit for coats. "Thank you so much for your most needed donation. The winter nights here in Syria are still cold and cruel, especially for children who have lost their homes. Many children continue to live in shelters that are not protected from the cold. Warm clothes help them survive," said Rasha Muhrez of SOS Children's Villages Syria.

The millions displaced by the country's internal conflict is set to increase from 3.5 million to 6.5 million by the end of the year, making campaigns like SOS's even more relevant. There are just seven days left of the campaign as of Friday, but it has undoubtedly opened the public's eyes to the ongoing effects of Syria's descent into destruction.