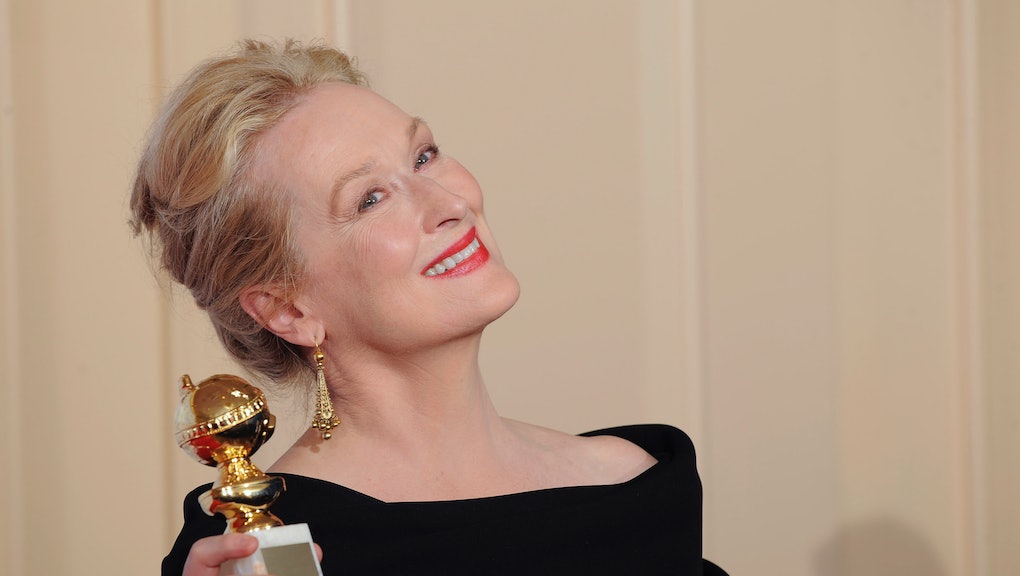 How Meryl Streep Became the True Mother of Hollywood Feminism

Forget your Jennifer Lawrences and your Lupita Nyong'os. A new feminist film icon for young women has arrived.

To be fair, with 64 years of life experience, 18 Oscar nominations, three Academy Awards and an IMDB page several feet long, "new" might not be the most accurate adjective for Meryl Streep. But with all the recent — and much deserved — hype about the actresses in their 20s and 30s who are storming their way through the glitzy glass ceiling of Hollywood, Streep sometimes gets forgotten as the mother ship who has been tapping away at that glass for decades. That success seems pale in comparison to her sparkling accolade of being Hollywood's best-loved actress, but make no mistake: Streep has proved herself to be the true goddess of film feminism.

The former part of that title became gospel last week, when Slate did some number crunching and realized that Streep gets thanked more often than God in Oscar acceptance speeches. In the last 12 years of speeches, the lady has been thanked four times for films in which she didn't even have a part, compared to a measly three thanks for the Lord.

But even skeptical young feminists will surely be won over by the true cherry on top: the announcement that Meryl will play Emmeline Pankhurst, the pivotal feminist leader, in a new British film about feminism's pioneers, Suffragette that begins filming today in the UK. Her role in Suffragette will be more of a cameo than a leading part, but she'll be there nonetheless alongside a female dream team of Carey Mulligan and Helena Bonham Carter, The Iron Lady writer Abi Morgan and Film4's Tessa Ross, queen of British film. This part, surely, will cement Streep's place as the ultimate female role model for young movie-watchers today.

Streep has nailed her roles as boundary-breaking historic female characters in the past. Her chilling performance in The Devil Wears Prada as Miranda Priestly, the fashion magazine editor widely believed to be based on Vogue top dog Anna Wintour, earned Streep a Golden Globe and an Oscar nod, as did her uncanny depiction of Julia Child, the pioneering chef and TV personality, in Julie & Julia. She's even starred in a film based around the Virginia Woolf novel Mrs. Dalloway, a feminist favorite. But perhaps Streep's pièce de feminist résistance to-date is her Academy Award-winning portrayal of Margaret Thatcher, one of the world's first female elected political leaders, in the 2011 hit The Iron Lady. This recent casting seems an obvious progression: Where else could Streep go from here but to play the ultimate feminist icon herself, Emmeline Pankhurst?

Streep — in a less whimsical (but not necessarily less important) version of Emma Thompson's recent anti-high heels tirade — is actively encouraging the movie industry to reevaluate its priorities, in true Suffragette style.

At the 2012 Women in Film Crystal + Lucy Awards, held in LA, Streep rallied filmmakers to create more movies aimed at women — not for the sake of feminism, or fairness, or factual representation, but to boost profits. She pointed out that five films in the previous five years that had been aimed at women stormed the box office charts, collectively grossing more than $1.6 billion. She mentioned The Help, The Iron Lady, Bridesmaids, Mamma Mia! and The Devil Wears Prada.

It's no coincidence that of those five balls-breaking blockbusters, Streep stars in three.

"Let's talk about The Iron Lady," Streep said at the ceremony. "It cost $14 million to make and brought in $114 million" in the global box office — beating Moneyball, the Oscar-nominated baseball movie starring Brad Pitt. "Pure profit! So why? Why? Don't they want the money?" Bridesmaids, also released in 2011, grossed $288.4 million globally, trumping Martin Scorsese's Hugo ($185.8 million), George Clooney-starring The Descendants ($177.2 million), Woody Allen's Midnight in Paris ($151.1 million) and Harvey Weinstein darling The Artist ($133.4 million), which swept the board during awards season.

More recently, in an ode to Emma Thompson's stellar performance as PL Travers in Saving Mr Banks, Streep called Walt Disney out as a "gender bigot" who "didn't trust women or cats" and rejected a woman's job application on the basis that "Girls are not considered for the training school," before self-defining as a "rabid, man-eating feminist."

Streep is not alone, of course. And in addition to the women already mentioned here, there's the ever-graceful Cate Blanchett, who wagged her finger at a Golden Globes red carpet camera that was panning up and down her body, asking, "Do you do that to the guys?" There's Melissa McCarthy, and Kristen Wiig, and Tina Fey, who are proving again and again that women can be funny. And there's Jennifer Lawrence and Lupita Nyong'o, who are making waves among women for their astounding talents, dogged determination, endearing friendliness and bodily self-confidence.

Olivia Wilde nailed it most recently when she questioned on Thursday why Hollywood isn't "telling the stories that are educating the masses to empower them to avoid" situations that lead to economic, racial and cultural discrimination against women. "It's really hard to get stories made that are about women," she said.

Well, if anyone can do it, Meryl Streep can. As she said in her Golden Globes acceptance speech for The Devil Wears Prada, "It's amazing how much you can get if you quietly, clearly, and authoritatively demand it."