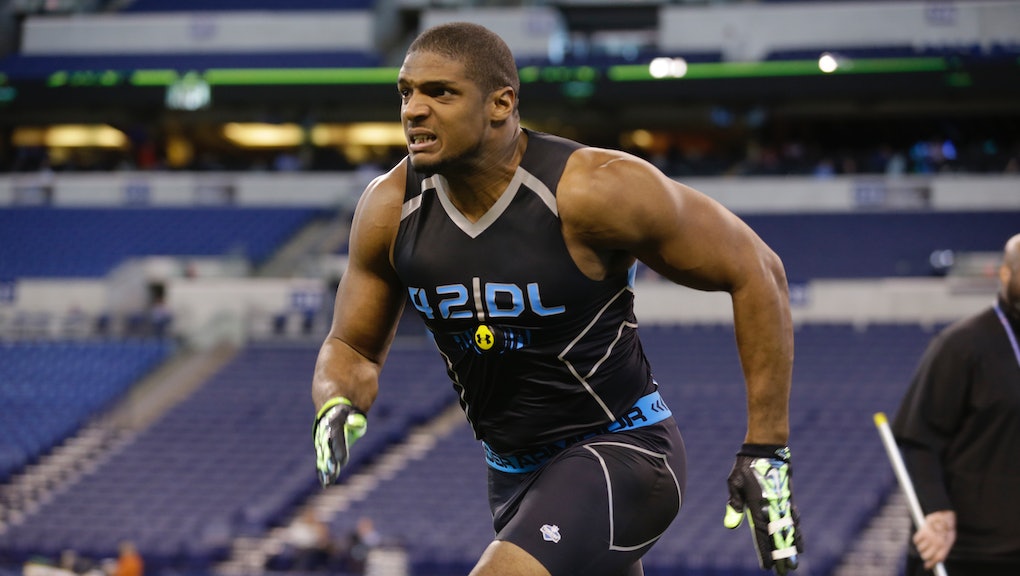 A Republican Lobbyist Wants to Ban Gay Players From the NFL

Draft hopeful Michael Sam's coming out announcement seemed like a forward step for professional football, but many were concerned that it wouldn't be welcomed in the NFL. Sam's draft stock has been falling since the announcement, anonymous NFL officials have been downplaying Sam's draft chances, and there has been a lot of back-and-forth over whether the NFL is ready for an openly gay player, or if it will ever be. And now some are taking measures to make sure that it never happens.

On Monday, lobbying firm Burkman LLC's founder and president Jack Burkman announced that he is drafting legislation to ban gay players from the NFL. While he didn't give out exact details of the legislation, he did say that six members of the Congress — five representatives and one senator — have expressed their interest in co-sponsoring the bill, and that in the coming weeks, the number is expected to rise to 36 representatives and five senators.

"We are losing our decency as a nation," Burkman wrote in his firm's announcement. "Imagine your son being forced to shower with a gay man. That's a horrifying prospect for every mom in the country. What in the world has this nation come to?"

Aside from the obvious homophobia, Burkman's proposal raises the question of how the public government can dictate the actions of a private organization. But according to Burkman, times of need have forced conservatives like himself to suspend their distaste for government policies.

"There are times when that is trumped for reason of great urgency or necessity. And I think this is it, because I see the society sliding in the wrong direction," he told the Huffington Post. "I figured, well, it is time for conservatives in Congress to step in and define morality for them [the NFL]."

As if that was not enough, Burkman said this gem about how discriminating against gay players is nothing like the NFL's previous history with racism against players of color:

"This is not about bigotry. It is about common decency and civility. Society is moving to a point where we are going to have unisex bathrooms and the next generation thinks that is OK," he said. He added that he would be willing to consider separate shower stalls for gay players, which isn't reminiscent of racial segregation, at all.

Though Burkman's bill has virtually no chance of passing, his intentions are clear: to incite homophobia, to use negative publicity to sink Sam's draft chances and to score his firm some PR points from bigots. If he had any "common decency and civility," he would not try to bring back the discriminatory practices that this country left behind a half a century ago.