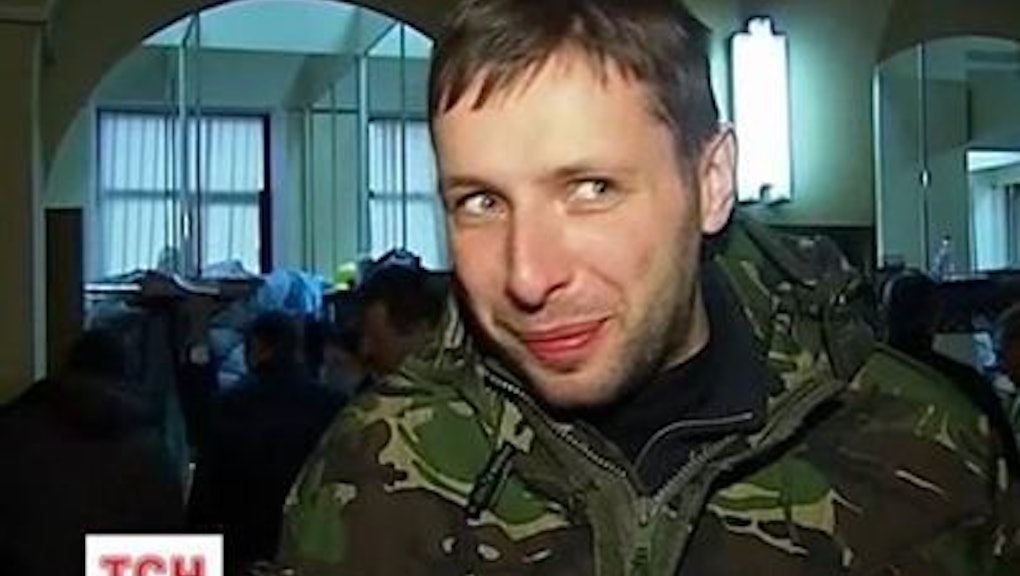 This Protester, 26, Gave the Most Electrifying Political Speech of Ukraine's Revolution

Ukrainian president Viktor Yanukovych is now a wanted man — and a missing one at that. Though he had a brokered a last-ditch peace deal with EU foreign ministers and opposition leaders, the protesters refused to accept it unless Yanukovych was ousted. And we have one 26-year-old man to thank for that.

Volodymyr Parasiuk, an unassuming young man who trained with the Ukrainian army cadets, has become the unlikely face of the Maidan. Though the opposition leaders were willing to accept Yanukovych's promises for constitutional reform and early presidential elections by December, Parasiuk denounced the deal on Friday as "shaking hands with this killer."

Commandeering the microphone from the opposition leaders who had signed the deal, Parasiuk broke down as he remembered his fallen comrades and rallied the crowd against accepting the deal. "Our kinsmen have been shot and our leaders shake hands with this killer. This is shame. Tomorrow, by 10 o'clock, he has to be gone," he said as the leaders left the stage to booing and cat-calling.

Vitaly Klitschko, the former boxing champ who had been a popular face of the opposition, returned to apologize for signing the deal.

Parasiuk's electrifying speech cemented the protesters' resolve to not give up the fight until Yanukovych was gone. Parasiuk promised that if Yanukovych did not leave by the morning, his fighting unit would commence an attack. By dawn on Saturday morning, the protesters — armed with clubs and shields — marched towards Yanukovych's office, the Cabinet of Ministers and the Parliament. Yanukovych was gone by the time they got there.

He had already deserted the day before by his own riot police officers, who drove off in the hundreds on Friday afternoon. The peace deal was his last chance at holding onto power for a precious few months. But inspired by Parasiuk's speech, protesters angrily refused the deal, providing the final nail on the president's coffin. Yanukovych left on a scheduled trip to Kharkiv, and has not been publicly seen since then.

"He was living in an illusion right to the end," said a Ukrainian politician, who spoke under the condition of anonymity. "He did not believe it was over."

"Emotions were overflowing because we had lost a great number of people. Suddenly these politicians come and say 'Yanukovych will stay as president and there will be elections.' I have a clear position. Yanukovych is a terrorist, Terrorist Number One, for Ukraine," Parasiuk told Reuters.

It seems that most of Ukraine agrees with him. Yanukovych now faces charges for mass killings, with the Parliament putting out a warrant for his arrest. Parasiuk's fiery speech and his uncompromising outlook have surely contributed to that — and will be long remembered in the history of Ukraine.