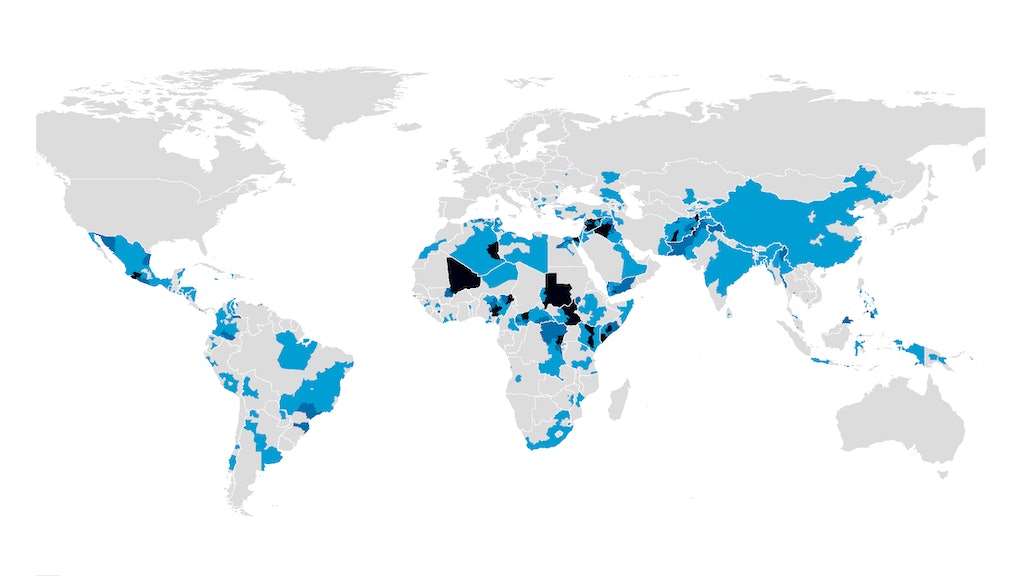 Every Violent Crisis That Happened Over the Past Year — Mapped

Last year was not particularly peaceful: As this map via the Heidelberg Institute for International Conflict Research shows, 2013 saw everything from riots, civil and military insurrections, to coups, drug violence and all-out civil war.

Most of the violence occurred across historic flashpoints in South and Central America, Africa, the Middle East, and Central and Southeastern Asia. A more comprehensive breakdown of civil and military conflicts can be found at theatl.as/, which tracks every current major disturbance on a rolling basis.

Closest to the U.S. is the devastating Mexican Drug War, fuelled by an estimated $13.6-$48.4 billion in illicit drug profits. That conflict recently saw a major government victory, when Mexican marines arrested Sinaloa Cartel boss Joaquín "El Chapo" Guzmán. But it's unclear whether that victory will translate to weaker drug flows into the U.S., or even a dramatic reduction in violence: In 2003, the arrest of notorious Gulf Cartel boss Osiel Cárdenas Guillén merely paved the way for his former enforcers, Los Zetas, to commence a reign of terror across Mexico. And the current conflict in Michoacán is largely thanks to the collapse of central cartel leadership under former La Familia boss Nazario "El Chayo" Moreno.

Other violence in the region was more restrained: While groups like Colombia's Maoist FARC insurgency and Peru's Shining Path remain active, their campaigns have wound down significantly in recent years after decades without success.

Meanwhile in Africa, Egyptian protests forced the ouster of Muslim Brotherhood-backed President Mohamed Morsi, and the likely ascension of army chief Field Marshal Abdul-Fattah el-Sisi to national leadership. Other insurgencies rage across the continent: The Darfur conflict resulted in the division of Sudan in 2011, and has made both resulting nations two of the most dangerous places on the planet. Somalia continues a violent civil war against jihadists, while the Central African Republic and DR Congo both continue nasty battles against insurgents. (France remains firmly committed to intervention in the former nation, where a top commander for notorious warlord Joseph Kony may have been killed recently by African Union troops.)

To the northeast, Iraq remains very unstable, while the conflict in Syria shows no signs of slowing down. Syria's civil war threatens to destabilize the entire region, especially with the entrance of Lebanese Hezbollah militants on the side of government forces. And bordering both nations, Turkey has seen major protests throughout 2013 against the democratically-elected Recep Tayyip Erdogan, who activists claim has been threatening Turkey's long-standing official secularism.

The war in Afghanistan is winding down, and U.S. officials may not be bluffing in their threat to retract all American forces from the country, barring the approval of a security agreement by President Hamid Karzai. But the exit of American troops doesn't mean the conflict is over, as civilian casualties rose 14% in 2013.

Finally, various ethnic and Islamist insurgencies continue across Southeast Asia. Though the Moro insurgency in the Philippines has recently reached peace accords, splinter groups threaten to torpedo the agreement. Anti-government protests in Cambodia and Thailand have threatened regional stability.

Overall, the map paints a rather bleak portrait of the world. While all-out wars between superpowers may now seem a relic of the 20th century, proxy wars, insurgencies and mass civil disturbance remain commonplace in many parts of the world. And absence of conflict does not necessarily indicate a high quality of life: Russia, North Korea and Greece are all notably conflict-free on the map, yet few would argue that these countries are particularly unpleasant places to live right now.