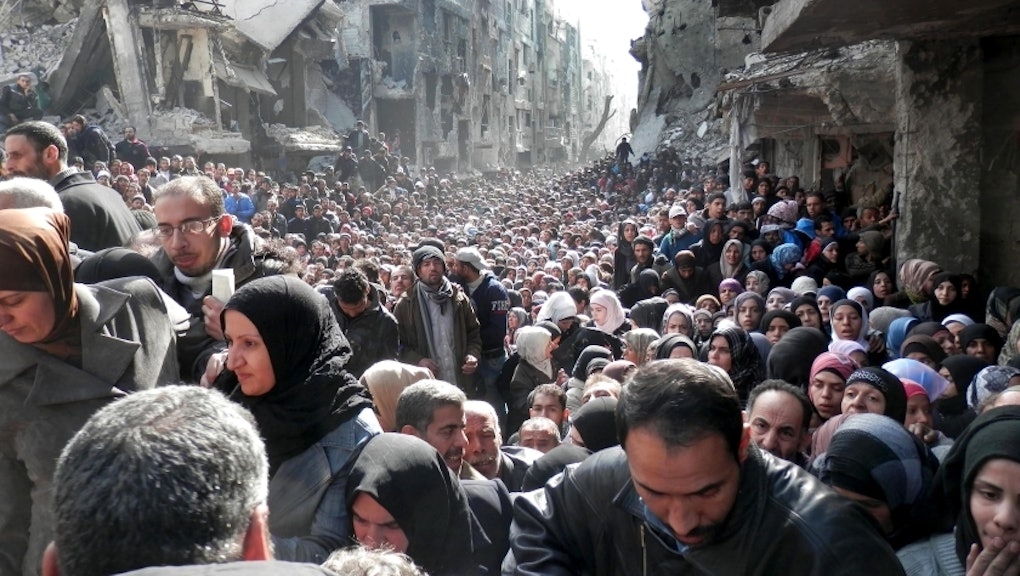 Chemical weapons, live rounds, grenades and bombs have killed between 89,000-140,000 people in Syria since its relatively peaceful uprising in 2011 turned into a full-blown civil war.

The largest of Syria's nine refugee enclaves is located in the Palestinian refugee camp of Yarmouk, where nearly 20,000 Palestinians remain. They are dying of starvation, as government forces have cut off food and fuel access to the area in order to weaken rebel groups that have surrounded the area.

In a rare visit to the camp this week, UNRWA (United Nations Relief and Works Agency for Palestine Refugees in the Near East) chief Filippo Grandi saw first-hand what Syria's crisis really looks like."

"These are people that have not been out of there, that have been trapped in there not only without food, medicines, clean water — all the basics — but also probably completely subjected to fear because there was fierce fighting."

More than 100 people have died in in the area since mid-2013 due to lack of food and medicine, the UN reports.

He is calling on both sides of the war to allow food and medicine access to the Palestinians.

Residents of Yarmouk line up each day hoping for food from humanitarian workers.

1. Cut off from the world

2. Children and elderly people account for 60% of the deaths.

According to reports, the majority of victims of the Yarmouk's lack of food and medicine are children or elderly people.

The head of the United Nations Relief and Works Agency for Palestine Refugees in the Near East used those words to describe the thousands of Palestinian refugees emerging from the rubble as aid workers delivered emergency food aid.

BBC reports describe scenes of children, parents and elders crying in hunger. Bread supplies are reported to have run out.

UNRWA first gained access to the camp on January 18 as has been struggling to meet needs since then.

6. Lives depend on fragile agreements.

Government forces and Syrian rebel factions have agreed on a tenuous agreement that allows limited amounts of food and medicine to enter the camp.

"Please, please take us out, we are dying here," 60-year-old Wafiqa pleads, crying.

Relief workers report that people have resorted to eating cats, grass and cactus to avoid death.

Snipers have killed people while they are gathering grass to eat, according to reports.

The UNRWA is pleading for help, saying "we need you" on its website. The organization is asking for donations to help continue delivery of food supplies.