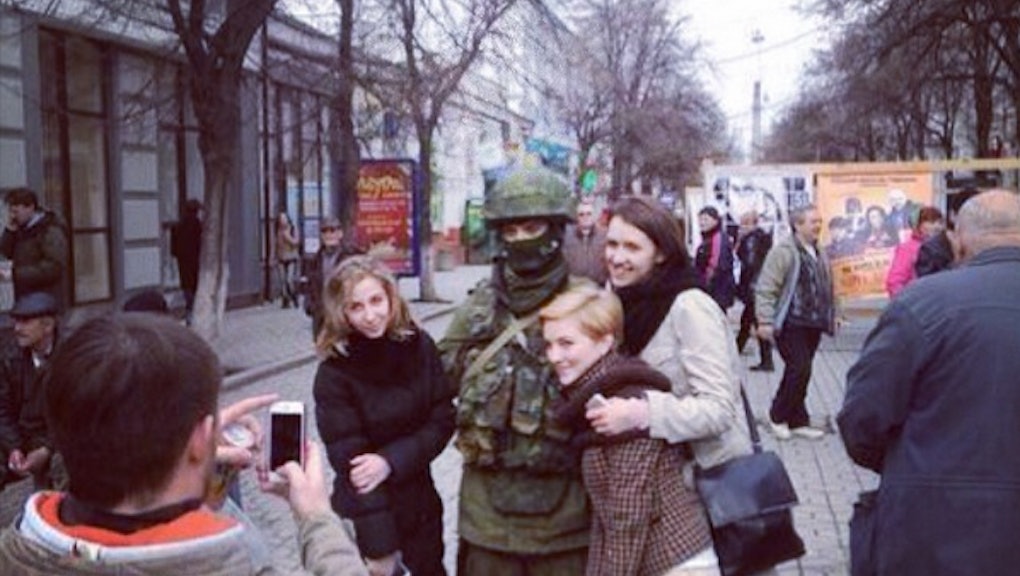 Selfies With Soldiers Is the Coolest New Thing in Crimea

Ukraine is deeply divided over Russia's military intervention in Crimea: while most ethnic Russians welcome the move, others in Ukraine see it as "hostile aggression" against the new interim government in Kiev. Though the Russians have yet to fire a single shot in Ukraine, tension increases as people in the country and around the world wait to see what will happen next.

But if one thing can be said for the Russian troops, it's that they're friendly. Though the sight of assault weapons and body armor may be intimidating, the masked soldiers seem more than willing to mug the camera for selfies with welcoming Crimean citizens.

Instagram is a treasure trove for awkward selfies with Russian soldiers. Here are a few gems:

The kid doesn't seem to care much, but the dad looks excited to show off his Russian pride.

The lady is wearing the orange and black ribbon of St. George, which commemorates the Soviet victory in World War II. It has become a popular gesture of support for the Russian intervention.

Those without iPhone are settling for good, old-fashioned point-and-shoot cameras.

The Russian soldiers are a hit with the ladies.

"My personal guard," the caption reads.

This one seems to poke fun at the international concerns: "SOS!!! HELP!!!" says the caption.

Just some bros hanging out.

They seem good with kids.

The kids are going to really appreciate these pictures when they grow up.

Tone-deaf faux pas or a genius PR move? You decide.