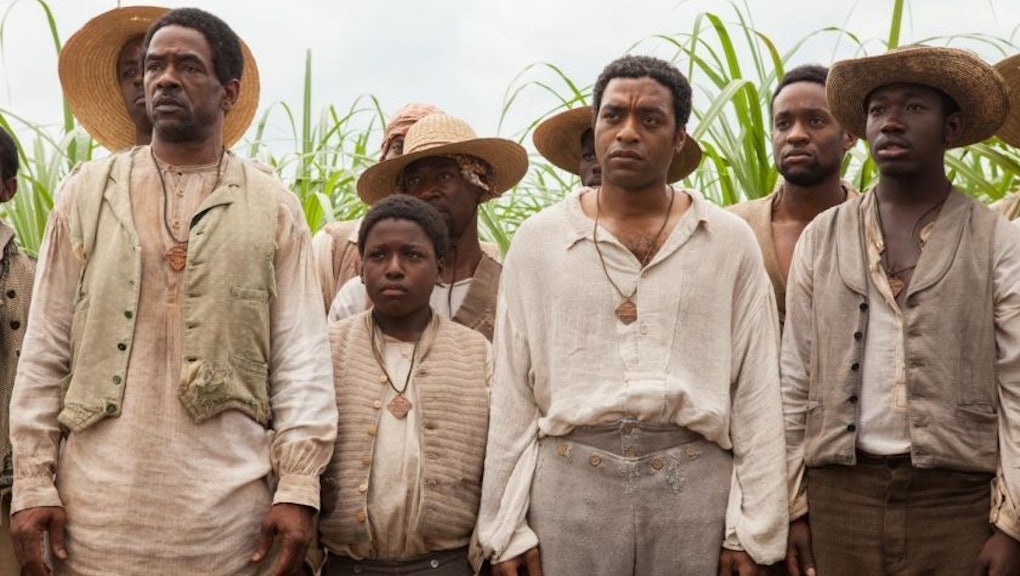 The news: Last night's Academy Awards are being applauded as a showcase for Hollywood diversity.

This seemed especially true for black talent: 12 Years a Slave won three Oscars including Best Picture, marking the first time a movie with a black director has won. John Ridley was the second black screenwriter to ever claim an Oscar, while Lupita Nyongo'o is the seventh black performer to win Best Supporting Actress.

Despite its historical lack of diversity, the Academy's tendency to award historical dramas makes these victories somewhat unsurprising. But as he did at the BAFTA Awards last month, director-producer Steve McQueen reminded viewers of another reason why Solomon Northup's story is especially important today:

"Everyone deserves not just to survive, but to live," he said during his acceptance speech. "This is the most important legacy of Solomon Northup. I dedicate this award to all the people who have endured slavery, and the 21 million people who still suffer slavery today."

Northup endured plantation life during the transatlantic slave trade, but his life bears striking similarities to what millions are going through now. According to a recent study from the Walk Free Foundation, titled "Global Slavery Index 2013," closer to 30 million people live under one or more of the following: "human trafficking, forced labor, debt bondage, forced or servile marriage, and the sale or exploitation of children including in armed conflict."

To paint a clearer picture of how this staggering figure breaks down, here are 11 reasons why 12 Years a Slave’s Oscar victory provides an equally important opportunity to raise awareness about modern day enslavement:

1. Slavery is a global tragedy. This map says it all. Nearly 30 million slaves are being held under various oppressed conditions around the world today:

2. An estimated 15-20 million people were deported from their homes and sold into slavery during the transatlantic slave trade from the 16th through 19th century. Today, that's the number of slaves who live in India, Pakistan and China alone.

3. The Americas account for 3.78% of the world's slave population. Most are concentrated in Latin America and the Caribbean — which is where 90% of African slaves ended up during the transatlantic trade.

4. The former transatlantic slave hub of Haiti still has the second-highest prevalence of slavery in the world. Over 200,000 people are enslaved in a country of 10 million.

6. Two of the most prominent forms of modern U.S. slavery were also fixtures of the transatlantic slave trade. The top form of sex trafficking in the U.S. is pimp-controlled prostitution, while the top labor trafficking industry is domestic labor. As 12 Years a Slave clearly indicates – especially through the scenes involving Lupita Nyong'o's character – the intersection of forced sex and domestic servitude was a brutal reality for many slave women.

7. Twenty percent of slavery in the U.S. is forced labor, not sex slavery. Forced labor still plays a major role.

8. A Polaris Project study recently found that 20% of reported labor trafficking victims in the U.S. are U.S. citizens. No one is immune.

9. U.S. law often punishes children for being enslaved as prostitutes. During the heyday of American slavery, children entered the labor force as early as age 3 or 4. Today, sex slavery accounts for the experience of most enslaved minors worldwide. A recent Washington Post piece exposed the absurdity of how these child sex slaves — especially those being prostituted — are handled by the justice system:

"These children are not routinely interviewed by sexual violence experts, as is done in other instances of child rape. Nor do prosecutors provide them the legal protections afforded to other sexually assaulted minors. Because they often are seen as prostitutes, these victims are routed into the juvenile justice system. In many cases, the girls are handcuffed and detained, sometimes for days or longer."

Needless to say, this needs to change immediately.

10. The faces have changed somewhat, but the problem remains the same. The top three languages spoken by survivors who contacted the National Human Trafficking Resource Center hotline (NHTRC), after English, were: Spanish, Tagalog and Amharic (spoken in Ethiopia).

But there's still plenty of work to be done. This is not a problem that will solve itself.