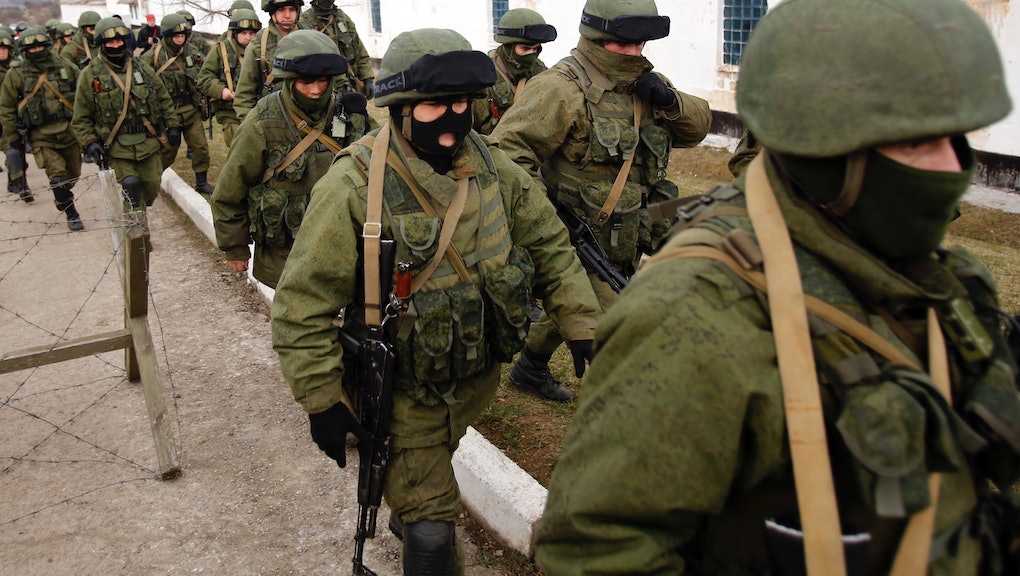 Depending on who you ask, the Russian military occupation of Ukraine is either a legitimate effort to protect the rights of ethnic Russians or an unjustified war of aggression on a sovereign power. Western leaders have made their stance clear. But Russia seems to be relying on a variety of tactics to take Crimea without firing a single shot.

Here's how they did it.

While Russian troops have been deployed onto the peninsula, many of them are not wearing insignias; The Daily Beast's Josh Rogin said that some of the earliest-deployed troops may have been Ukrainian mercenaries employed by Russian private military contractors. Such a move would be best interpreted as trying to maintain the veneer of legality of Russian movements while avoiding the formal appearance of the Kremlin's soldiery.

There's also been a propaganda war directed less at credibly influencing Russia's opponents and more at convincing ethnic Russians in Crimea to side with the Kremlin; just check out these selfies with anonymous commandos taken by pro-Russian Ukrainians to see how it's working. Either way, they're claiming the deployment of troops was requested by ousted President Viktor Yanukovych, thus making the invasion "fully appropriate and legitimate."

According to the Kyiv Post, which is tracking ongoing developments, multiple rounds of ultimatums have expired without the Russians actually opening fire on Ukrainian units. In this context, repeated proclamations of imminent open warfare are intended to convince the defenders to surrender without firing a shot; if that fails, Russian forces are prepared to cut off electricity and water supplies to their bases in an attempt to convince them resistance is futile. It's what contributor Brian Bonner calls a "war of nerves," and it's unclear how far it can continue until someone fires a shot.

Meanwhile, pro-Russian gangs actively encouraged by Russian government forces have been on the move. Ukrainian government buildings in Donetsk, Odessa, and Luhansk have been broken into by activists.

This strategy might at first seem devious and well played, but it's not. While it's difficult to imagine any way Russia could flex its muscles to prevent Ukrainian assertions of political independence without angering the world community, invasion is definitely the worst possible choice. It is a clear violation of international law and long-standing commitments to Ukraine to honor their territorial integrity, including the 1994 Budapest memorandum disarming the former strategic nuclear zone of all its weapons of mass destruction. Essentially, Ukraine returned all of its nuclear weapons to Russia in exchange for a promise of non-interference; but Russia's current action is likely to set a precedent that will make other countries think twice before getting rid of their nuclear arsenals.

Moreover, the deployment of troops without insignia is a violation of the Geneva Conventions. Even if some of the deployed troops are Ukrainian mercenaries working for Russian interests, it would constitute a distinction without a difference. And Yanukovych is no longer recognized by most of Europe or the U.S. as the legitimate leader of the Ukraine, meaning his approval is meaningless to anyone but the Kremlin. No one is fooled by any of this, and the risk that it will come to violence is very high.

Even if it works, the diplomatic blow-back will threaten to bring relations between the west and Russia to their lowest point since before the collapse of the Soviet Union.