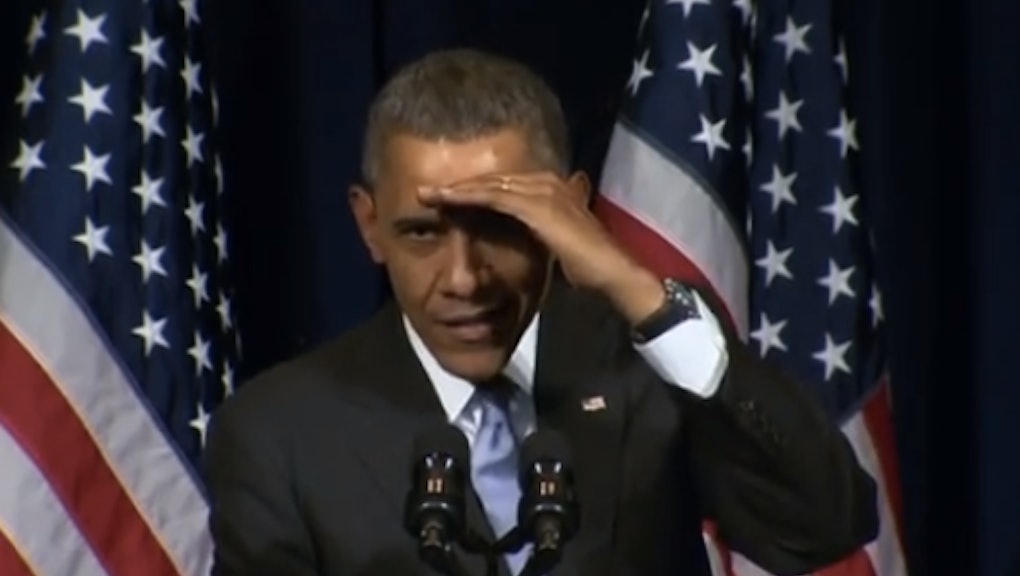 A Heckler Asks Obama About Nuclear War With Russia, He Responds With This Hilarious Face

With tensions rising between the West and Russia over the latter country's ongoing occupation of the Ukraine's Crimean peninsula. President Obama and Secretary of State Kerry have harshly rebuked the deployment of special forces in unmarked uniforms to airports and other key facilities, as well as the movement of other Russian forces across the region.

But there's one thing that you definitely don't need to worry about in this time of crisis: nuclear war with Russia. During a recent speech to the Democratic National Committee, a heckler confronted Obama with a question about his plans for mutually assured annihilation at the hands of Russian and American thermonuclear weapons. The leader of the Free World responded with this excellent look:

While probably not even the dumbest among us thought the current Ukrainian crisis could reach the level of nuclear war, the current Russian stalemate is very serious. President Obama has issued a harsh rebuke, seemingly with the approval of much of Europe and many former Soviet republics. Fortunately, while the U.S. is weighing a variety of responses to the crisis, the commitment of American troops to an intervention does not seem to be one — nor does the bombardment of Moscow with dozens of little gifts from Uncle Sam.

And while you wouldn't know it from the heckler, our water supply is just fine, and no, the Russians aren't contaminating our precious bodily fluids.

Watch the whole thing below: