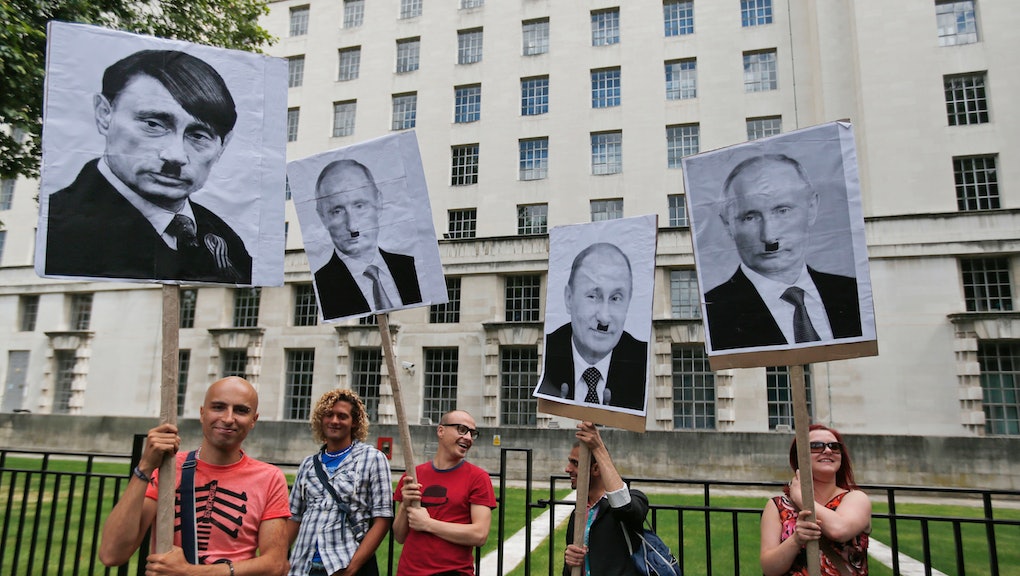 Putin has his eye on Crimea, and rumors of a possible war are swirling as Russian soldiers seized the Ukrainian province a few days ago. As things between Russia and Ukraine in Crimea get more and more tense, all kinds of graphics, tweets and editorials have been popping up across the Internet, comparing both sides of the conflict to Hitler and the Nazis.

If you want to find a quick and easy way to get people to support your cause and hate the other guy, calling him a Nazi might be the best way to do that. Philosopher Leo Strauss put it simply: It's using guilt by association.

Basically, supporters of Russia or Ukraine: It's not cool to use Nazi comparisons. Putin is not Hitler. Hitler was an atrocious human being who did atrocious things. Putin has overseen a flawed government that in many ways has shown little regard for human rights. But at this moment, he is worried about Russia's naval base in Sevastopol and ethnic Russians in Ukraine. Those in the government in Ukraine are not Hitlers either. Ukraine is worried about its sovereignty. Comparing each side to Nazi Germany, even in jest, is hyperbolic propaganda that escalates conflict and can end political dialogue altogether. Even in Internet memes or weird joking posts, it's not cool. It indicates that you are refusing to understand both the magnitude of how horrible Hitler was and the fact that your opponent might have valid interests.

And, have you ever heard of Godwin's Law? It's a rule for online debate that says that the longer the debate goes on, the more likely it is that one side will call the other a Nazi. And the problem with calling someone a Nazi is that it completely cuts off productive debate.

There's an exception to Godwin's Law, and that's when you're actually talking about another totalitarian regime. But let's just, for our sake, continue on like neither Russia nor Ukraine is totalitarian.

Why is Russia calling the Ukrainian government Nazis?

Putin and his cronies sincerely believe that "political power in Kiev has been concentrated in the hands of far-right extremist elements that do not hide their xenophobic, anti-Semitic, neo-fascist credentials." That is an excerpt from Russia's official statement.

The thing is, they're sort of right, but not quite. There are a few extremely right-leaning political parties in Ukraine. One of them, Svoboda (Freedom), even has several politicians in the current Ukrainian government. And Russian media won't let Russians forget it.

There are certainly acts of anti-Semitism in Ukraine. Svoboda's leader, Oleh Tyahnybok, once said when Yanukovich was president that his country was led by "Muscovite-Jewish mafia." In late February, a firebomb was set outside a synagogue 250 miles from Kyiv during protests. The Jewish Agency in Israel has offered emergency aid to Jews in Ukraine. This photo has been making its rounds on Twitter and Tumblr:

It says "Death to Jews," and it was written on the walls in Crimea's capital of Simferopol on Feb. 27.

Is the Ukrainian government really full of Nazis?

Image Credit: AP. Supporters of the nationalist Svoboda party during a march in Kiev.

No. The interim Ukrainian government is primarily full of politicians from the Fatherland Party, a relatively moderate party that supports Ukraine's sovereignty.

They did allow Svoboda to make a pretty harsh nationalist move, though, just last week. They brought an end to a law that gave equal status to minority languages like Russian. It was passed in 2012 by Yanukovich's government to allow regions in Ukraine where the ethnic minority population is greater than 10% to have two official languages.

A pretty low blow to ethnic Russians in Ukraine, but not quite fascism.

Why are Ukraine supporters and political commentators calling Putin a Nazi?

Some of those adamantly against Putin's military invasion in Crimea are saying he's not doing anything different than what Hitler did when he invaded Czechoslovakia and Austria in 1938. They're saying that in both cases, both leaders used ethnic commonalities of a certain population in the other country to legitimize force.

"It is not only the same people but above all a long communal history and culture which bind together the Reich and Austria."

European Parliament member Charles Tannock, who is on the foreign affairs committee, write an editorial titled "Putin's Kampf" and went so far as to say that what's going on in Crimea is "the most naked example of peacetime aggression that Europe has witnessed since Nazi Germany invaded the Sudetenland in 1938."

Canadian Foreign Affairs Minister John Baird made the same comparison in an interview on CBS' Power & Politics. When host Evan Solomon asked him if he was comparing Russia to Nazi Germany, Baird said, "When you have on country invading one of its neighbors, and using this type of outrageous and ludicrous rhetoric, it's hard not to."

Is He Really a Nazi?

No. A little more than half of Russians consider Crimea to be a part of Russia, according to a poll by Russia Public Opinion Research Center conducted in September. So, arguably Putin is taking Crimea for himself to appease the Russian people who think it's rightfully theirs.

Some Russians believe Putin is keeping the peace in Crimea, protecting ethnic Russians from clashes with supporters of the new Ukrainian government, which they are afraid will take away their cultural rights or attack them. Moscow-based journalist Alexander Zheleznyak told the Guardian that he believes Putin has "taken the responsibility on himself and stopped senseless beatings in Crimea." The BBC reported one man died probably of a heart attack in clashes outside Simferopol's parliament in late February.

There's a place for strong ideology. But when fighting between warring countries involves comparing the other side to Nazis, a middle ground becomes impossible to find.