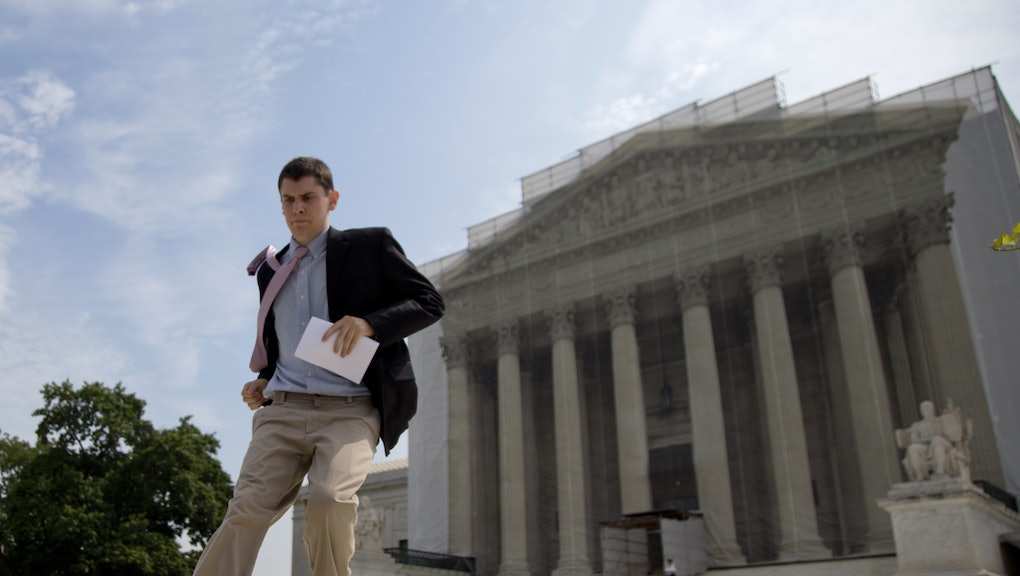 Legal execution is a shameful practice that is still widely accepted and generally favored in America. But the latest case to be argued in front of the high court, Hall v. Florida, offers a possible light at the end of the tunnel for opponents of the death penalty.

The Supreme Court heard oral arguments Monday in the biggest challenge to capital punishment in a decade. At the heart of the case is whether a mentally-delayed person can be put to death for his crimes. Is it cruel and unusual punishment?

Hall v. Florida, centers on 68-year-old Freddie Lee Hall. In 1978, he was out on parole for assault and attempted rape when he murdered a pregnant 21 year old. He was also convicted separately of killing a sheriff's deputy. His IQ is estimably in the low 70s, which is the baseline often used for mental retardation.

The question before the court is whether Florida can put Hall to death either by lethal injection or the electric chair. In Atkins v. Virginia, a previous case, the court found that executing mentally delayed inmates violates the Eighth Amendment, which bars cruel and unusual punishment. However, the decision left it up to the states to decide where those lines are drawn. Now, Florida's line (an IQ of 70) is being called into question. Many doctors say it is insufficient to determine capacity on its own.

Florida says there's no national consensus on an IQ test and there's no reason for the court to impose one.

The reason the court went the way it did in Atkins was the national consensus — the will and opinions of Americans. In its decision, the court found that the Eighth Amendment should be applied with full consideration to the "evolving standards of decency that mark the progress of a maturing society" and recognized that the consensus, to not execute mentally delayed inmates, was already growing at the state level through state laws. It locked that shift into law with its ruling.

There will be a time for the death penalty, as a whole, to be nailed up and examined again under the lights of the Eighth Amendment. What's up to us is to shift the national consensus, state by state, away from using the death penalty at all.

We have our work cut out for us, but it's getting closer. At the time the court ruled that mentally delayed people were not fit for capital punishment, 21 states had already ruled against it, along with Congress. Here's where we stand now on capital punishment in the states. There are a number in need of flipping:

The stakes are high. We all have the moment we made up our minds about the death penalty.

I was taking a "psychology in law" class in college from an expert in capital cases. She often testified as to the mental ability of a defendant to stand trial.

One of her cases was of a young man in his late 20s, who, developmentally, was around 9 years old. He lived in the garage behind his parents' house. He would go out in the morning and get a 24-pack of beer and sit in his room, the garage, drinking all day. One day, he went over to his neighbor's house, an 80-year-old woman, and raped her. She died of a heart attack.

I watched the video of police interrogating him. He was by himself with two detectives. They befriended and lied to him, and over hours and hours he told them everything. "Getting sex," he called it. The question was whether he could stand trial, whether the death penalty could be sought. His parents never showed up.

I thought to myself at the time, 'kill him.' That he and any rapist, molester, murderer, should be killed and we'd all be better for it.

Then I looked at a photo him smiling in jail, clueless. Is that whose life we want to take?

Hell no, that can't be on us. We could put an end to it in our generation.

"Death is not only an unusually severe punishment, unusual in its pain, in its finality, and in its enormity, but it serves no penal purpose more effectively than a less severe punishment ... The fatal constitutional infirmity in the punishment of death is that it treats 'members of the human race as nonhumans, as objects to be toyed with and discarded."-Chief Justice William Brennan, 1976