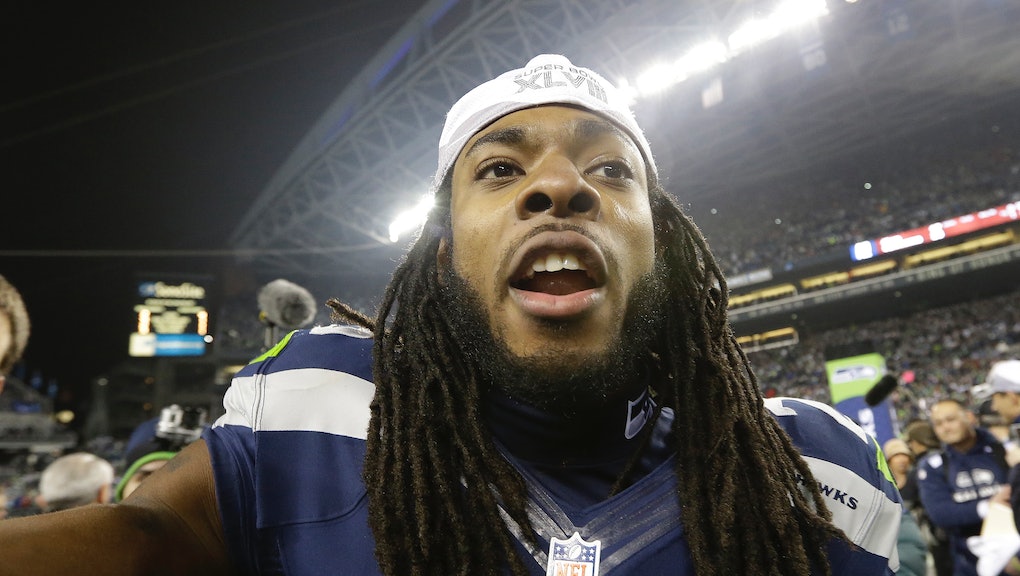 The news: To say that the N-word has a complicated history in America is an understatement. Some use it as a term of endearment, others as a cruel racial slur and many avoid saying it altogether.

But the eight-man NFL Competition Committee entered dicey territory last week as it contemplated penalizing players for using it on the field. When asked what he thought of the possible changes, Seattle Seahawks cornerback Richard Sherman had harsh words: "It's an atrocious idea," he told Sports Illustrated columnist Peter King. "It's almost racist, to me. It's weird they're targeting one specific word. Why shouldn't all curse words be banned then?"

Tennessee Titans cornerback Jason McCourty added: "It's a common word in so many players' everyday lives. Among African-American players and people, it's used among friends all the time. It seems like a bit much for the NFL to try to get rid of it."

With a 120-page rulebook to enforce, it seems NFL officials have enough on their plates without also having to keep their ears open for one solitary word. So why is there such disagreement around whether this rule should be implemented?

Instigating events. It's safe to assume these talks largely derived from the actions of Richie Incognito. The Miami Dolphins guard's incessant bullying of teammate Jonathan Martin — which resulted in Martin taking a leave of absence — sparked a league-wide conversation around how players treat each other. Missouri defensive end Michael Sam's coming out as potentially the first openly gay NFL player brought tolerance issues even further to the forefront. Now, the league is debating what they consider logical next steps.

It's also safe to say they would not have arrived at the talks of their own volition. The Fritz Pollard Alliance, a group that promotes diversity and equality among NFL coaches and staff, has been vocally advocating for this penalty throughout the off-season. Hall of Fame linebacker and Pollard Alliance executive director Harry Carson said Sunday: "I find it very disheartening that in our society today we're having a debate about the n-words being used as a term of endearment. If that's a term of endearment, go up to your grandfather, or an elderly black person, and use it on them. See how they react. For those who use it, I say they have no sense of history."

The generation gap. Statements like this are at the heart of nearly every debate surrounding use of the "n-word" among black Americans. It's generally divided along generational lines: Older folks — like the 60-year-old Carson — see it as an ugly symbol of oppression, while younger generations have largely re-appropriated the term to a variety of different ends. Sometimes it's the equivalent of "bro," used among buddies. In other instances, blacks even award their white friends a "pass" and "allow" them to use the term in their presence.

Inevitably, this has led to confusion about when, where and how the N-word can or should be used. The only definitive takeaway from such debates is that this issue is best handled on a case-by-case basis — the terms of which are usually dictated by people with de facto "ownership" of the word, i.e. black Americans.

Whether this is right or wrong is beside the point. The real problem arises when a majority white administrative body — like the NFL — unites with older black coalitions to police the language of young black Americans. Proper use of the term is obviously not a clear-cut issue, especially for the generations that would be most directly impacted by this change. So why act like it is?

To be clear, there are discernible usage differences that can be easily dealt with through current NFL rules. Players are already penalized on the field for excessive taunting and profane language. In the locker room, the Richie Incognito incident set a high-profile precedent for how bullying should be addressed moving forward. And coaches and owners maintain the authority to regulate player conduct off the field and in their private lives — an equally fraught issue best left to a different conversation.

But on the field, use of the N-word would be nearly impossible to police. The first of many questions involves how one could equally penalize a black player for using the term to encourage a teammate and a white player who uses it to insult a black opponent. And as Peter King rightly points out, what if the word is used in a group altercation and the ref accidentally misattributes who said it? A player who didn't even use it could be inadvertently penalized and possibly stigmatized.

Final thoughts. The fluidity and confusion around the word itself seems to escape many people advocating for the potential rule change. In a situation like this, it seems best handled on an individual basis, with all the word's diverse usage possibilities taken into account. This certainly won't make things simple, but it's better than enacting draconian rules around an issue so widely misunderstood.

Fortunately, the NFL Competition Committee — half of which is black, I might add — is merely responsible for suggesting rule changes for owners to vote on, not making the rules themselves. Voting doesn't begin until March 23 in Orlando. We'll see what they come up with then.