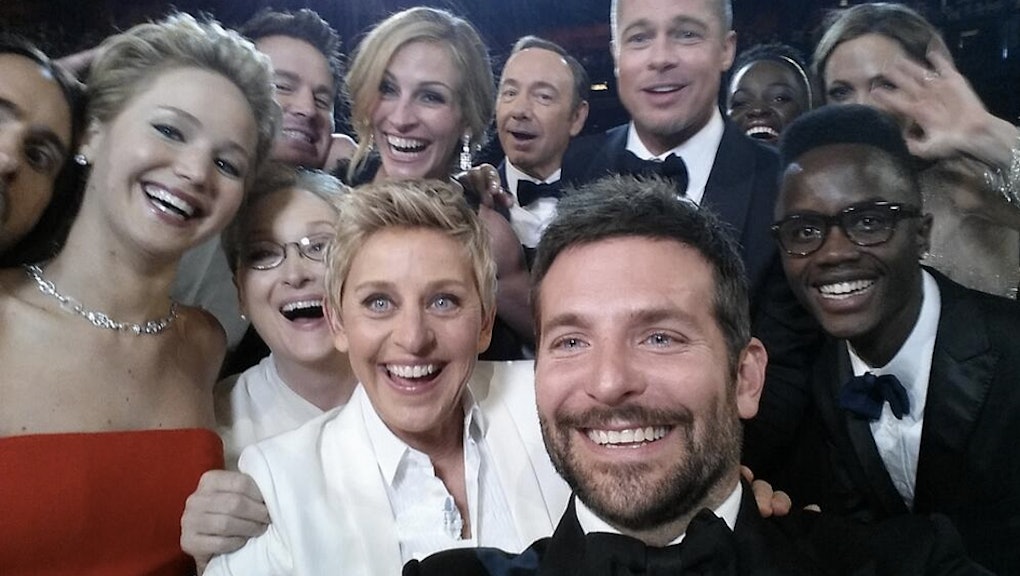 Who Owns the Viral Oscar Selfie? Not Ellen DeGeneres

It was the tweet heard around the world. After Oscar host Ellen DeGeneres asked the viewers at home to help this star-studded picture go viral, it actually broke the Twitter website and ended up becoming the most-retweeted tweet in history.

It was no wonder that the selfie would take over the Internet — over 43 million people were watching DeGeneres' missive from at home (the highest ratings since 2004), and the selfie contained some of the biggest names in Hollywood. But now that it has been retweeted and reblogged ad nauseum, the question remains: who actually owns it?

That question was especially important for the Associated Press, which reached out to DeGeneres for permission to use the photo — which was granted. But from there it gets murky. Who gets actual photo credit, and therefore license?

It's become such a mystery that the Wire even went as far as to call up attorneys, who all offered different theories as to who might own the actual rights: Is DeGeneres a co-owner of the photograph? Do Twitter's terms of service cover ownership? Does Samsung — who gave the phone to DeGeneres for the PR moment — have a claim?

According to U.S. copyright law, the rights belong to the photographer. If you don't remember what went down, here's a refresher: DeGeneres began randomly grabbing A-list celebrities to join her selfie, but the group grew much larger than she anticipated. Jared Leto ran across the room to take part, and Lupita Nyong'o was joined by her brother (a college freshman who came as her date). Poor Liza Minnelli got stuck in the back:

Eventually, DeGeneres said she couldn't fit everyone in and asked for someone with longer arms to take the picture. That's when Bradley Cooper volunteered:

Because Cooper was the photographer, he automatically became the copyright owner. So does that mean he will profit from the photo? Probably not. Though TMZ went far as to say that the rights would "come in handy if that Hangover money runs out," Twitter's contract allows dissemination for fair use. As long as people aren't making money off it, they can embed, retweet or source the Twitter photo without having to pay Cooper.

Of course, things might change if Samsung tries to turn the photo into a PR campaign. That is, after all, why they provided DeGeneres with the Galaxy Note 3. Legally, they would have to get Cooper's permission to use the photo — although we really don't think the back-to-back Oscar nominee with a $28 million net worth will get stingy over a selfie.