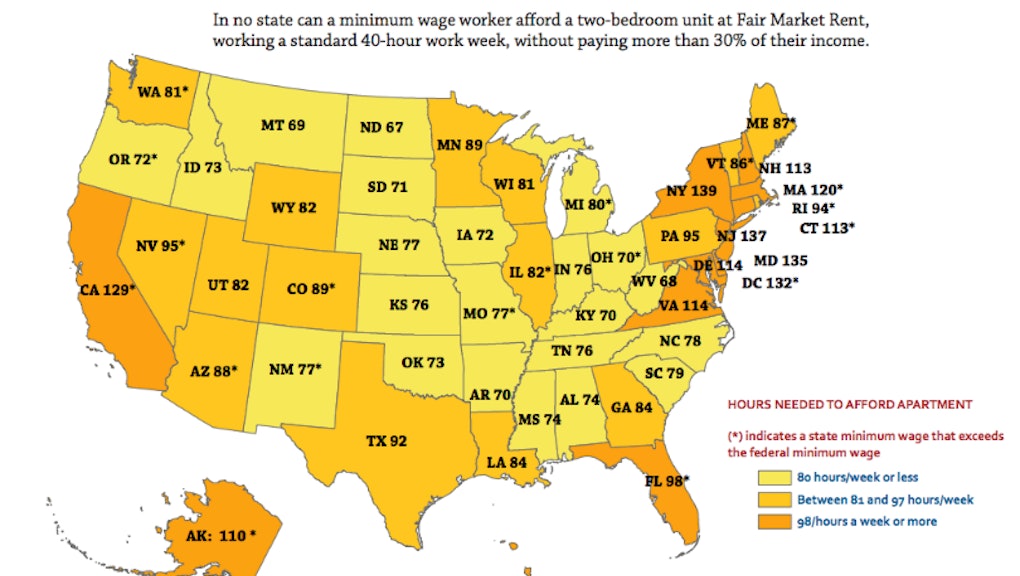 Since President Barack Obama announced his plan to raise the minimum wage to $10.10, the country has been divided over the feasibility of the measure and its potential impact on the nation's economy. But one thing is clear: something must be done to change the status quo.

The National Low Income Housing Coalition (NLIHC), which provides both policy solutions and affordable housing options, compiled a map to illustrate just how hard it is to get by on minimum wage. For each state, the NLIHC calculated how many hours an average minimum wage worker or household would need to work each week in order to pay rent on a two-bedroom apartment. Check out the map below:

With 67 working hours per week, North Dakota had the lowest necessary minimum wage hours, while New Yorkers would have to clock in a whopping 139 hours per week to afford a Fair Market Rent apartment.

Despite having a state minimum wage higher than the federal minimum wage, California, Alaska, Florida, Massachusetts, Connecticut and Washington D.C. would all require minimum wage workers and households to work 98 hours or more every week to pay rent.

And as can be clearly seen in the map, there's no state in which minimum wage workers could afford a two-bedroom apartment on a standard 40-hour work week without paying more than a third of their income.

In contrast, the map below indicates the hourly wage that a household should be paid in each state to afford rent:

The good news for Obama is that most Americans support the proposed minimum wage hike. In December, a Wall Street Journal/NBC poll found that 63% of Americans are in favor of raising the minimum wage to $10.10. A Washington Post/ABC survey found similar results this week:

While we probably won't see anything close to Switzerland's proposed minimum wage of $24.80 per hour, it seems that for now, most Americans are backing Obama's proposal to at least somewhat improve the lives of minimum wage workers.