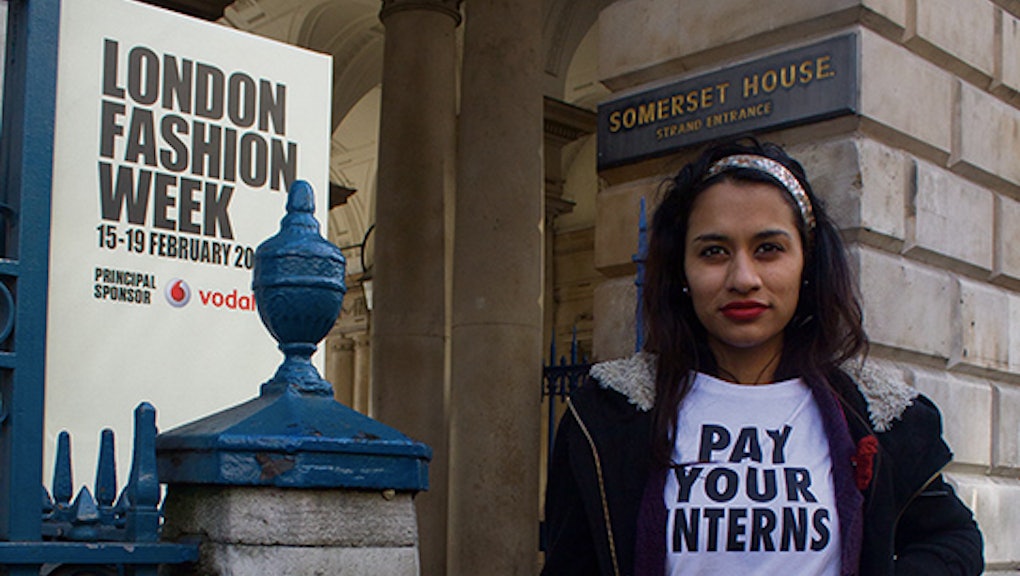 In her speech to UCLA students this week, Hillary Clinton took a stand against unpaid internships, blaming the "youth unemployment crisis" on the weak economy young people have been tossed. There are no real entry-level positions or on-the-job training, Clinton argued, and businesses are taking advantage of the young labor force with unpaid internships.

She is not the only one fed up with the expectation that millennials will work for free to get their "feet in the door."

Recent lawsuits have been eye-opening for the internship world as many employers, such as Condé Nast, Fox Searchlight and Charlie Rose, have come under scrutiny for not paying their interns.

Frankly, we're way past fed up with it. We're shocked it still exists in 2014!

Millennials have already paid their dues. We have the degrees — and debt — to prove it. This should not still be an argument, but it is. Beyond the basic ethical premise that unpaid internships are simply a way for employers to exploit young people for free labor, there are plenty of ways to make the case for doing away with the pomp and procedure surrounding unpaid internships. Here are six reasons why this needs to happen now.

1. Key industries are being shaped by privilege.

It is a pervasive catch-22 that only exacerbates the already growing wealth gap between the rich and poor in America: You must have experience to get a job, but you need a job to get experience. Sorry, America, but not everyone can afford to work for free.

No matter how prestigious an internship is, if it doesn't pay, many students can't take it because they can't afford to. Unfortunately, these are usually the very candidates who would benefit the most from networking because they don't already have a leg up.

The Atlantic writer Phoebe Maltz Bovy recently said that unpaid internships are often written off as a rich kid problem because rich kids are the only ones who can afford to take unpaid positions. But they are a poor kid problem too because they serve to further exclude the very people that need access the most.

Ross Perlin, author of Intern Nation, explains how not paying interns further contributes to inequality: "Unpaid internships create a pay-to-play system since only some people can afford to work for zero dollars for longer than a week or two. This ultimately exacerbates social inequality because key professions get filled up with people from privileged backgrounds; it not only affects who gets ahead and does well, it also plays a big role in terms of the voices we hear in the media, politics, arts, etc."

Putting young people in bad financial situations from the start positions them to accumulate larger amounts of debt. It also causes stress that makes it harder for them to invest energy in developing professionally or even finding a job.

3. Paying interns drastically increases their chances of finding a job.

One of the most common defenses of unpaid internships is that they will either lead to a job offer with the current employer, or, at the very least, give a leg up when applying for paid positions.

According to a 2013 survey by the National Association of Colleges and Employers (NACE), that is not the case. There is little difference in employment outcomes between those that have unpaid internship experience and those who have no internship at all.

When you consider that for many companies the bottom line is the bottom dollar, it's important to point out that paying interns is ultimately better for companies as well.

Paid internship programs get a better, more diverse pool of applicants for companies. When NBC News decided to pay their interns, they started getting applications from areas where students previously couldn't afford to take unpaid position in New York.

Diversity has been found to improve the overall experience of staff. This is because diversity among staff enables people who think differently to come together and derive a more enriching collaborative experience from their work. In the long term, this spurs economic growth and helps prevent turnover at businesses.

In fact, in June 2013, Judge William H. Pauley III of the U.S. District Court for the Southern District of New York ruled in favor of two petitioning interns who were suing Fox Searchlight Pictures Inc.'s film Black Swan. The court ruled that the interns were classified as employees rather than "trainees" according to the Fair Labor Standards Act.

In order for an intern to be classified as a "trainee" rather than an employee, his relationship with the employer must fall under a criteria of a six-part "test."

In the case of Black Swan, the interns were instructed to do menial tasks, such as picking up paychecks, which could have been done by a paid employee and didn't provide an educational environment for the interns. This made Fox Searchlight the "primary" beneficiary in the arrangement.

6. Unpaid interns have no protection against harassment or discrimination.

In addition to unpaid internships naturally excluding less wealthy applicants from the work force, those who actually are able accept positions as unpaid interns have no protection against discrimination once they enter the workplace either.

Title VII of the Civil Rights Act of 1964 protects employees, but does not have provisions for unpaid workers or "trainees" in regards to discrimination or harassment.

Obviously, working in an environment where potenital harrassment or discrimination are unchecked does little to empower the next generation of America's work force. In fact, it does the opposite. With unpaid internships, employers are essentially saying to millennials, "Times are tough and you are desperate, so we can and will exploit you for profit. Your work and ideas are worth exactly zero dollars to us."

If last year's lawsuits were any indicator, millennials are fed up and fighting back. We are America's workforce so pay us what we're owed and, in the meantime, hear us roar.