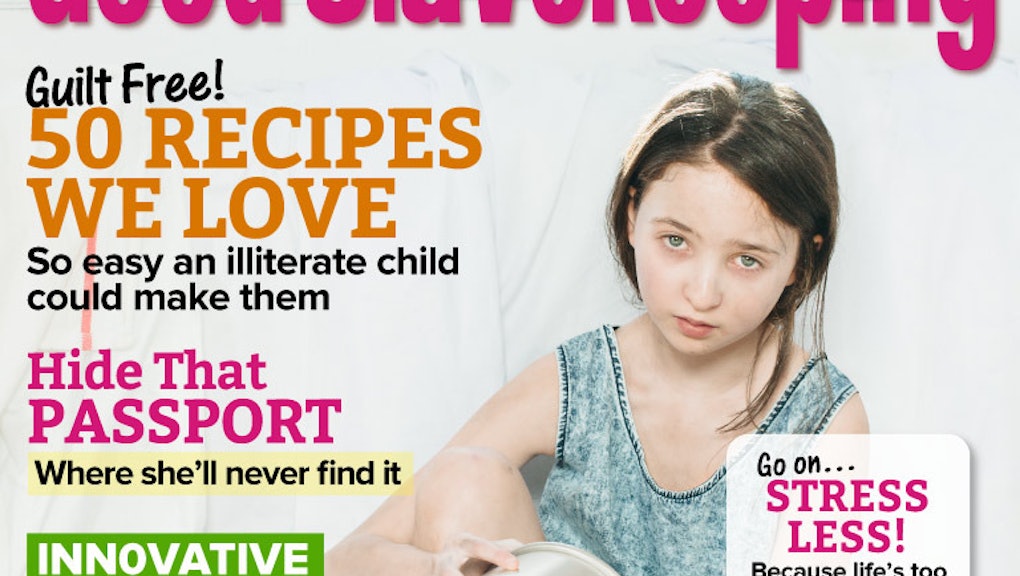 To mark International Women's Day, the nonprofit organization Catapult has designed a series of mock magazine covers that will make you think twice.

The idea is to draw attention to the brutal violations of human rights taking place around the world and to turn some of the issues affecting millions of young women into "more than just a cover story."

Catapult, an offshoot of the NGO Women Deliver, helps generate funding for projects that will improve the lives of girls and women. In the year and a half since its launch, Catapult has funded 314 projects in 81 countries raising $5.5 million in 2013.

"We cannot see progress in our world without addressing gender equality," its website states. Hopefully these haunting magazine covers will help spread awareness of the issue and stop people from glossing over the problems.

The campaign focuses on three ways that young girls are exploited: marriage, slavery and prostitution. These are all issues that seem to be getting worse around the world rather than better. For example, 38,000 girls are forced into marriage every day, and the number of child brides is expected to grow by more than double from 2010 to 2020, according to Human Rights Watch. Similarly, though many see slavery as a thing of the past, advocates estimate there are still more than 8 million child slaves, working as domestic slaves, child soldiers and child miners, among others. And there are estimated to be 2 million children caught up in sex trafficking, an industry whose targets are 80% female and roughly half underage.

This year 14 million girls, some as young as 8 years old,will be married against their will.

Riffing on the recognizable Brides magazine, "Child Bride" boasts feature stories such as "Proposal Stories! 583 Tales of Rape, Acid Attacks, Kidnapping," "Exercise Secrets: You CAN get in shape for giving birth at 14!" and "The wedding you'll never forget but wish you could."

Next to each mock cover, Catapult's website invites you to "do something about it." Donating to this cause will help protect Afghan girls in danger of early marriage, which can also mean less access to education and higher risk of domestic violence, by building extra classroom space in a community center in Queens, New York.

The NY Community Center has been helping Afghan immigrant women since 2001. In 2010 it helped 238 families. Last year, that number more than quadrupled.

(It should be noted that this cover has been critized by some who feel the portrayal of child brides is oversimplified, making the problem seem like a product of a savage or outdated culture.)

An estimated 1.2 million children are trafficked into slavery each year. Eighty percent are girls.

Good Housekeeping seems less innocuous when written for the benefit of slave owners. Cover features include, "Hide that passport where she'll never find it," "Innovative punishments that really work!" and "35 days to train the perfect slave: How to whip her into shape, fast." A chilling bonus badge reads, "Slaves do the dumbest things ... The pleas for mercy that make us LOL."

This cover isn't linked directly to a project, but Catapult's website lists hundreds of campaigns that will help give women and girls a better life, from human trafficking and labor exploitation to economic security and education.

In New York City the average age at which a girl first becomes a victim of commercial sexual exploitation is 13.

"Who needs a childhood anyway?" this magazine cover asks. Playing on the popular teen magazine Seventeen, it also offers advice like, "How to run in heels: Six fashion tips that could save your life," "Hide those bruises with 35 easy makeup tricks" and "OMG! The shocking real-life stories you won't believe — and the police won't either."

Despite the horrific issues featured in Catapult's cover campaign, approximately 7% of all U.S. foundation funds go to causes that help girls and women, and approximately one-fifth of organizations that seek to address women's rights are struggling to survive, according to Catapult.

Magazine covers have a habit of fueling furor. Here's hoping these will do the same — for change.