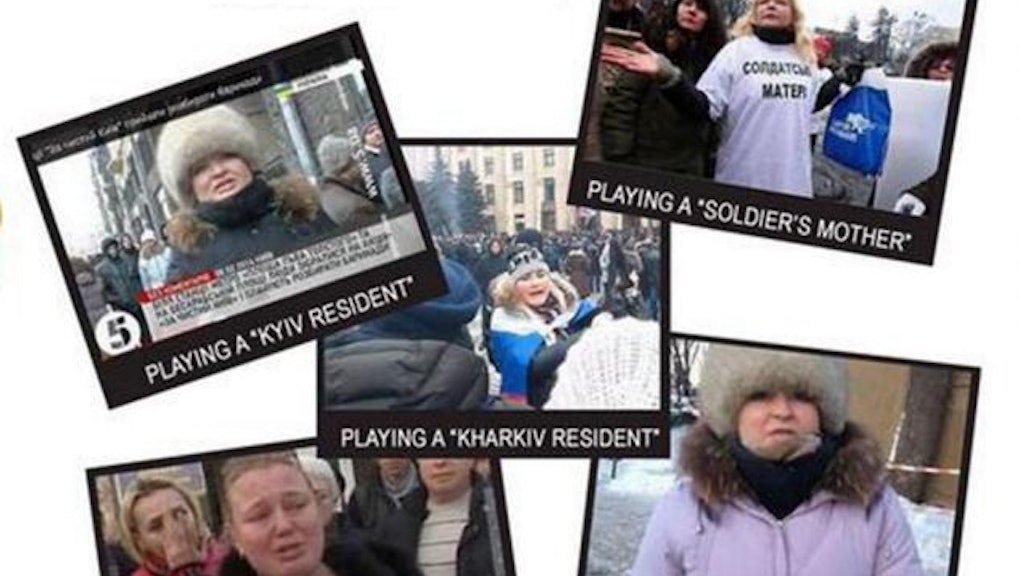 In what might possibly be the strangest thing to come out of the ongoing Russian-Ukrainian, Russian television has been accused of hiring an actress to spread pro-Russian propaganda.

This blond woman seen on television broadcasts is either one of five quintuplets or a housewife in Odessa, a soldiers' mother in Kiev, wrapped in a flag in Kharkov, wearing a big hat in Kiev and an anti-Maidan activist, all at once. And every time she's appeared, she's begged for Russian intervention in the Ukraine.

The resemblance between all of the women is pretty uncanny.

Ukrainian media sources told the Daily Mail that the woman is a well known "guest actress," who has also appeared in protests in Sevastopol in Crimea and Novocherkassk in Russia. She also allegedly appeared on the LifeNews website under the name Tatiana Samoilenko, who said she was forced to flee Ukraine with her three children and Russian husband after threats of violence.

"When those pro-fascist politicians got power, we did not think for long," the woman told LifeNews. "We decided to go to Russia. We quickly understood we had no time to waste, or it could get worse."

Russian news outlets have been churning out an astonishing amount of pro-Kremlin propaganda — just read RT (Russia Today) headlines such as "Self-Defense Forces RankS swell in Anticipation of Crimea Showdown With Radicals" and "Tea, Sandwiches, Music, Photos With Self-Defense Forces Mark Peaceful Sunday in Simferopol." According to the Russian government, fascist protesters in the anti-government Maidan movement have assumed power and Russian forces are needed to restore order to the Ukraine. State media outlets haven't been shy about making it clear that no one can question the Kremlin's line. One RT anchor even quit on live TV after claiming she was forced to propagandize justifications for the invasion.

If the claims that the woman is a fake are true, they would be a disturbing but not unexpected addition to the Russian government's plan to annex Crimea. Ukrainian officials claim that hundreds of "Putin tourists" have showed up since the beginning of anti-government protests this year, seemingly to act as a pretext for Russian aggression.