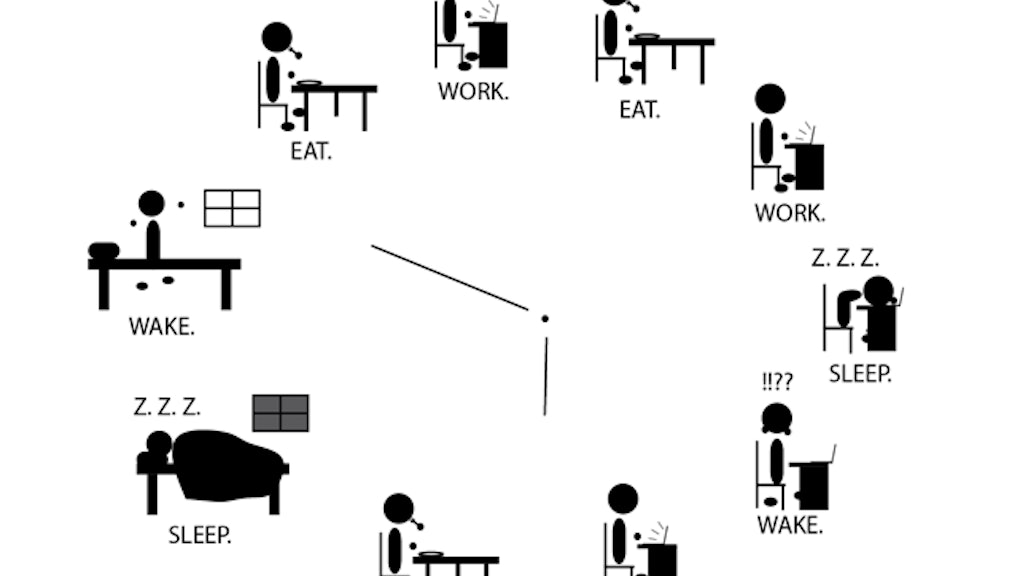 When you have so much work to do, the solution most people think of is that you should work more hours.

Living and working in a technological world also doesn't help because we constantly feel plugged in to our work devices, meaning we're basically working 24/7 in some cases. The problem is, working more doesn't actually help your focus, productivity or general well-being. It also doesn't help increase revenue streams for your company, and the most productive countries prove this by working less.

If you've always suspected that working more hours isn't helping you, you're not imagining it. Here are eight charts to show your boss the next time you feel overworked:

A 2011 study published in the journal Cognition showed that subjects can stay focused much longer with short, controlled breaks. This graph shows that subjects who "switched" tasks were able to pay attention longer.

So the next time you find yourself drifting into a vortex of ADD-like behavior, take a breather and read an article before getting back to the grind.

Last September the Economist showed that working more hours is actually inversely correlated with efficiency. This means the more hours you work, the less you accomplish per hour.

The Organization for Economic Co-operation and Development (OECD) (basically a club incorporating the world's richest countries) released data on which countries work the most hours per year. Greeks put in more than 2,000 hours annually, while Germans work an underwhelming 1,400 hours. And yet Germans are about 70% more efficient.

Last September the Productivity Commission of New Zealand published a paper showing that New Zealand and Australia had worked the same number of hours since 1956, but Australia has gotten a lot more out of those hours than New Zealand in terms of GDP. Not only does working more hours damage efficiency, but it also doesn't translate to an increase in overall productivity.

3. The more you work the less you'll get done, which leads to burnout.

If you've studied economics, you might have heard of "diminishing marginal returns," or "utility." This is basically how it works: Imagine you have a cookie, and the buttery, gooey and wonderful experience of eating it. If you have 30, that's pretty good. But if you have 50 or 60 cookies, somewhere along the line, eating the next cookie is just never going to be as awesome as eating the cookie before it.

Labor works the same way. The first 30 or 40 hours of work you put in, you can get a lot done. In economics terms, the "return" on the hours put in continues to go up. But once you cross a certain threshold, you'll never get as much done in the next hour as you did the hour before that, and your returns begin diminishing. Eventually you'll enter the burnout zone, when the amount of work you finished is worth less than the hour you just spent.

4. Some of the most productive countries have a 48-hour weekly cap.

Some of the most productive countries, like the Netherlands, Denmark and Germany, have a 48-hour cap, meaning it's illegal to work more than that.

This is a map showing countries that have some kind of law or mandate limiting the number of hours an employee can work in a week. Most countries put the cap at 48, and the U.K. allows workers to keep chugging along after 48 hours if they so desire. Some countries hardly ever enforce the law, as is often the case in China and Mexico.

But the law exists to protect workers. The next time you're working too much, remind your boss that those in the Netherlands, Denmark and Germany are most productive and also happen to work the least.

This graph published by the Economist shows how you might actually work yourself into an early grave. The more hours you put in, the more years of your life you lose. There's a wealth of literature correlating extra working hours with negative health outcomes, such as increased risk of anxiety, mortality, heart disease, depression and general misery.

6. Working more only increases revenue for a short amount of time.

In 1909 economist Sydney J. Chapman published a paper called "Hours of Labor," which provides evidence that reducing work hours doesn't result in a reduced output, which is the "money" axis in this graph. Instead he showed that an increase in working hours resulted in an initial boost in "money," but over time, production declined and eventually became negative. Chapman argues that the boost in rest from taking time off allows workers to produce just as much or more in fewer hours.

In 1914 Henry Ford introduced a theory centered on working weeks of varying lengths. Shortly after, he announced: "Now we know from our experience in changing from six to five days and back again that we can get at least as great production in five days as we can in six … Just as the eight-hour day opened our way to prosperity, so the five-day week will open our way to a still greater prosperity."

7. You'll get more satisfaction out of life, including your work, when you work less.

Countries that have the longest working hours end up having far lower life satisfaction index rankings than those that work the shortest hours in the OECD.

The graph here shows the proportional reduction in global warming resulting from cutting back working hours. Part of the idea is that slightly reduced production would also reduce emissions. Rosnick said that a 0.5% reduction in work hours could mitigate 25% to 50% of global warming.

In 2008 Utah temporarily had government workers transition to a four-day work week. The Guardian reported that morale among government employees went up when this happened, while carbon emissions went down by 14%.