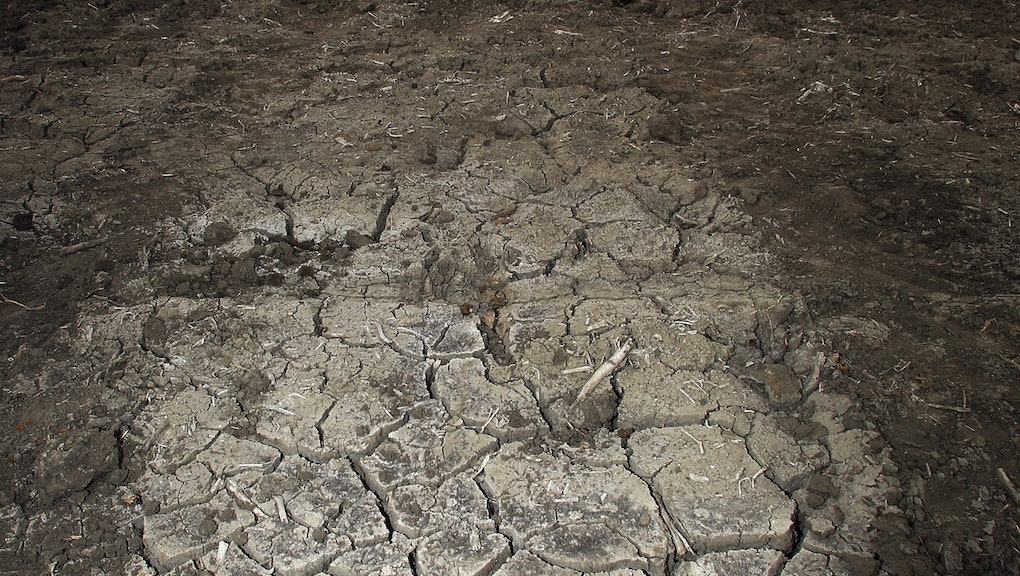 The picture above may look like something you would expect to see in sub-Saharan Africa or in some post-apocalyptic film. But taken last month, the picture captures a grim reality at a place far closer to home: California.

The state is currently dealing with the worst drought in 165 years, and things are not looking up. If you don't know how bad this drought has gotten, check out NASA's side-by-side comparison of the Folsom Lake reservoir:

Things are looking dire, with the California governor calling for a state of emergency and asking residents to conserve their water. But it looks like California may be in the long-haul when it comes to dealing with its drought.

Back in 2004, University of California, Santa Cruz professor Lisa Sloan used computer models to project an eerily accurate prediction of the ongoing California drought. She and her graduate student Jacob Sewall found that the disappearance of Arctic sea ice would lead to "a significant reduction in rain and snowfall in the American West." Her models found that a column of high-pressure air would build up off the West Coast, forcing the jet stream to travel in a more northerly route:

Sloan's projections are troubling enough, but she now foresees that "the actual situation in the next few decades could be even more dire that our study suggested."

"Why do I say that? (1) we did not include changes in greenhouse gases other than CO2; (2) maybe we should have melted more sea ice and see what happens; (3) these atmospheric and precipitation estimates do not include changes in land use, in the U.S. and elsewhere. Changing crops, or urban sprawl increases, or melting Greenland and Northern Hemisphere glaciers will surely have an impact on precipitation patterns," she wrote to ThinkProgress.

Translation: climate change may be happening faster than Sloan could have predicted.

Of course, there are alternative explanations for the California drought as well. As NOAA meteorologist Martin Hoerling told the New York Times, "The bottom line is that this type of drought has been observed before. And, to state the obvious, this drought has occurred principally due to a lack of rains, not principally due to warmer temperatures." He also pointed out that there may be greater "obligations for water" due to rising populations and demand.

Still, Sloan's projections provide a reason for this "lack of rains," instead of simply pointing at other historic cases of drought. She was right ten years earlier, and if she's right again, things are not looking pretty for California.