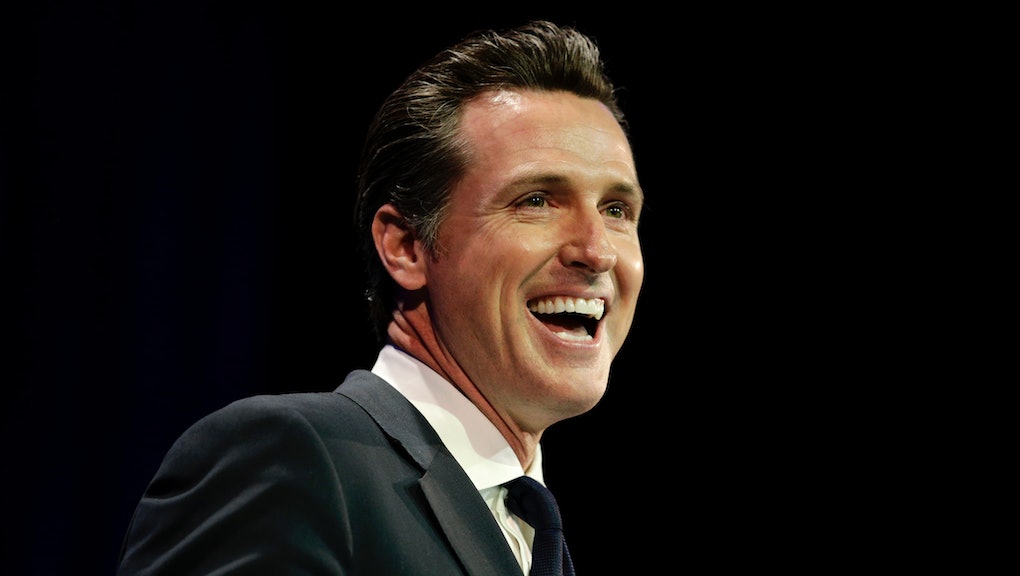 The news: California Democrats have finally officially gotten behind marijuana legalization in a big way — and Lt. Gov. Gavin Newsom just advanced the cause in a beautiful and passionate speech.

The mayor of San Francisco from 2004 to 2011, Newsom has emerged as a fierce contender in California politics and is most famous for ordering the San Fran's city-county clerk to issue same-sex marriage licenses in violation of standing state law. Now he has something to say about marijuana legalization. Some hightlights from the speech include:

"It's time for all of us to step up and step in and lead once again in California, just as we did in 1996. We did just that with medical marijuana. But for almost 20 years now, we've sat back admiring our accomplishment while the world, the nation, and states like Colorado and Washington have passed us by ... It's time to legalize, it's time to tax, it's time to regulate marijuana for adults in California."

Good timing: It's an interesting time for Newsom to endorse marijuana so directly. Washington state and Colorado both recently legalized the drug, creating a legal mess but seeing huge and immediate dividends in arrests. Colorado has already taken in some $2 million in tax revenue, despite a frustrating regulatory environment that resulted in a slow start for many of the state's dispensaries. And while it's a little early to judge, nothing immediately apocalyptic has come out of either state so far.

Around the country: Meanwhile, marijuana legalization is rapidly becoming prime time politics. Polling put support for legal weed in Colorado and Washington at 56% in 2012; in New York, 88% of voters favor medical marijuana and 57% favored legal recreational marijuana in a poll released Monday. California is no exception, with at least 55% in favor of full legalization in November 2013. With legalization in nearby states, support has surely grown. And Newsom, who was slighted by a terrible speaking slot at the convention, seems to view latching on to legal marijuana as another way to compete with gubernatorial opponents in 2018. His remarks are in many ways a direct response to current Gov. Jerry Brown, who recently said he was opposed to legalization because, "How many people can get stoned and still have a great state or a great nation?"