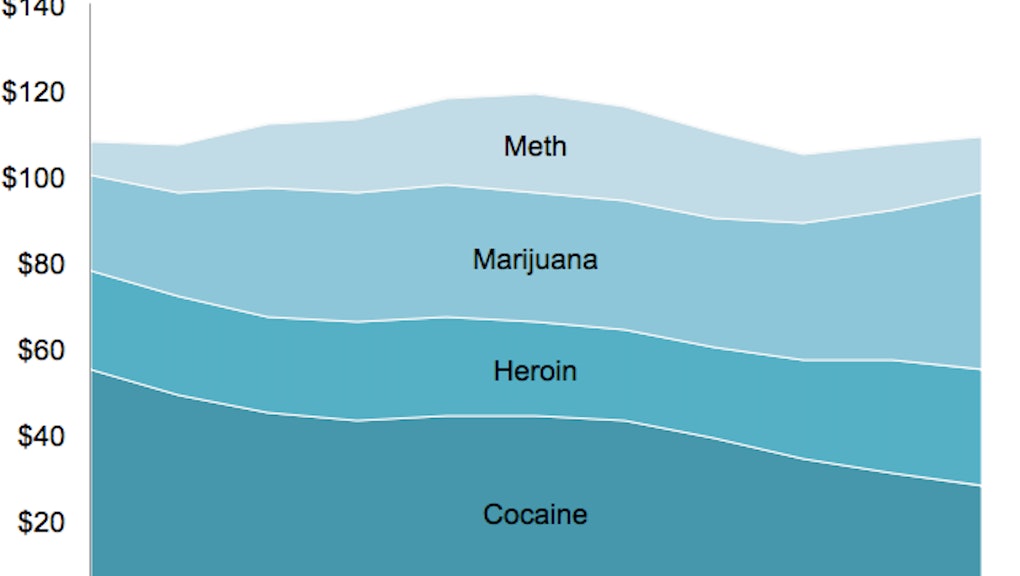 Which Drugs Are Americans Most Addicted to? The U.S. Drug Problem, in Charts

About $109 billion. That's how much America spent on just four illegal drugs in 2010 — meth, marijuana, heroin and cocaine — according to rough estimates prepared by the RAND Corporation for the White House.

That's more than all of 2011's sales in furniture ($90 billion), electronics and appliance retailers ($101 billion), sporting goods ($82 billion) and almost as much as the entire miscellaneous retail sector (counting florists, office supplies, used merchandise, and other, about $111 billion). It dwarfs the amount we spent on bars in 2011 ($20.7 billion) as well as what Americans purchased at beer, wine and liquor stores ($42.6 billion). The $109 billion spent on drugs is more than half of the entire full-service restaurant industry ($212 billion).

The majority of that money is spent by a small minority of users who get high at least 21 days a month. But as the chart below indicates, the number of chronic users who use at least four times a month is pretty big as well. While the estimates are far from precise, they do roughly map out the collapse of cocaine and the rise of marijuana:

Rough estimates. RAND admits that its estimates are just the most plausible results; for example, their estimate of cocaine pricing ranges from $18-44 billion with a most likely guess of $28 billion. Heroin is $15-45 billion with a best guess of $27 billion. Marijuana? $30-60 billion. And meth is the most unpredictable, from $6-22 billion. It's especially tough to estimate the depth of America's meth problem because of its widespread nature (meth is common in rural areas, but the best data is focused on cities), inconsistent data and the fact that meth is often mixed with other psychostimulants, making it difficult to study. Meth also peaked in 2005 and 2006 and has been subsequently declining. If Walter White was real, he might find himself out of business:

But overall, usage of everything but marijuana can be seen decreasing (though there is some evidence heroin is on the comeback):

Some things never change. Regardless of which drug is in vogue at any given moment, America's appetite for drugs remains insatiable. That's $109 billion poured down a black hole into a world of crime and tax evasion.

But adding to the toll on society is the estimated $15 billion in federal funds and $25.7 billion in state and local funding spent annually to combat the problem. Forty-three years after President Nixon declared the War on Drugs, this is still as big of a problem as ever. Americans just switch between different psychoactive substances.

This shouldn't be too surprising. When you fight drugs with SWAT teams, border control, commandos in foreign countries, guns and prison time, you're not actually doing anything to affect the demand for drugs in the first place. By instead treating drugs as an issue of public health and welfare, not only could the U.S. achieve more results with less money, it could eliminate some of the drug industry's most lucrative and dangerous customers.