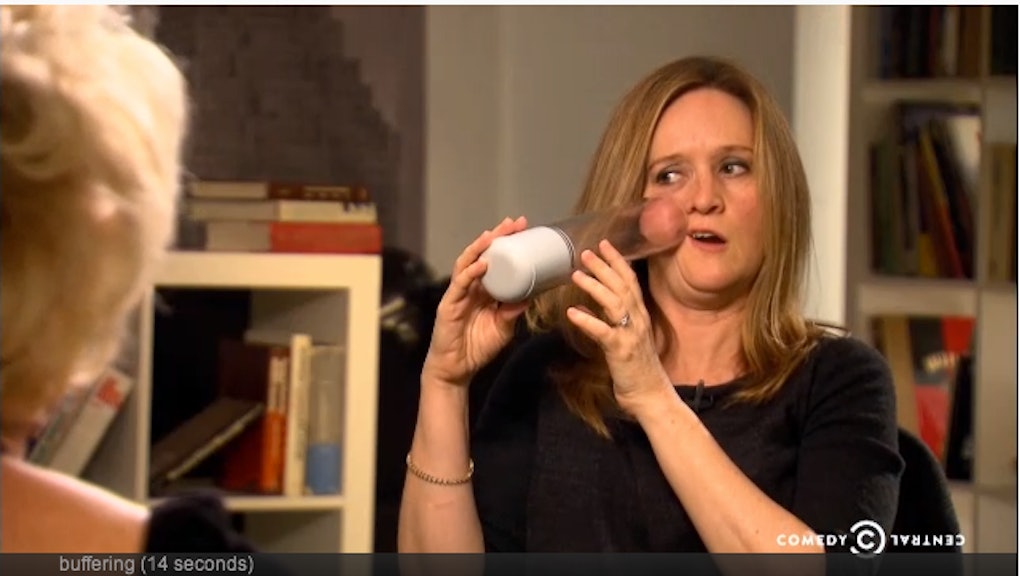 You've heard a lot about the birth control mandate, but have you heard anything about the penis pump mandate? Thanks to the Daily Show's Samantha Bee and her interview with NARAL Pro-Choice America President Ilyse Hogue, you will now.

If we didn't spend so much time debating whether women who use birth control are skank muffins or slut bags, maybe we would notice that penis pumps have been receiving millions of dollars of federal funding over the years. Although birth control has health benefits, has been deemed an intrinsic human right by the United Nations and is one of the biggest factors in helping women approach economic parity, many conservatives remain luke-warm about it, because, Jesus.

No one wants to pay to you to have sex! That's ridiculous! That is unless, you're a dude.

Although the birth control mandate has been hotly debated and contested for its burden on taxpayers, Medicare has spent $172 million on penis pumps in the last five years alone. Viagra has also received $819 million and Cyalis more than $782 million. But you'll never hear those numbers being debated anywhere.

Politicians have spent countless hours debating whether birth control should be federally funded, and zero minutes discussing whether penis pumps should be covered by Medicare.

More than six out of 10 women use birth control for health reasons like lowering the risk of getting cancer and to treating Endometriosis. These benefits, I'm pretty sure, penis pumps don't offer.

It's clear that congressional debates over Medicare benefits focus on some forms of federally funded sexual health care. And by some, I mean women's. If politicians come to their senses and debate the federal funds given to penis pumps, it should be done so by an all-female panel, you know, for consistency.