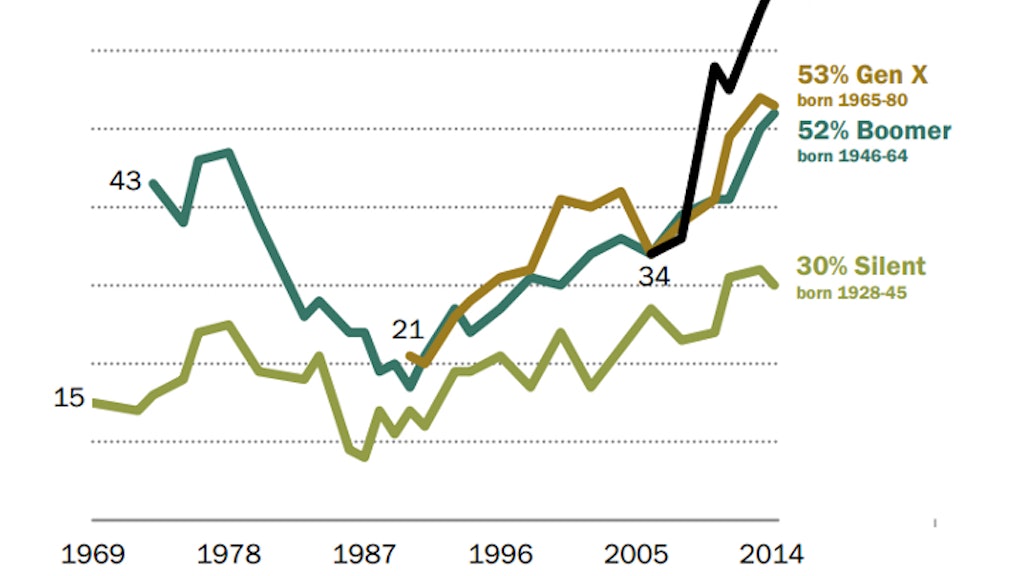 More and more, it seems like national marijuana legalization is happening, and happening fast. Marijuana is now legal in Colorado and Washington state, and state and local authorities around the country are rapidly following suit to decriminalize recreational pot or legalize its use for medical purposes. States like New Jersey are mulling legalizing the possession of small amounts of marijuana entirely.

But what's behind this massive shift in drug policy opinion? Changing generational sensibilities. In a Pew Research Center poll released last week, Millennials were noted as overwhelmingly supportive of marijuana legalization at a stunning 69% rate, more than double their support as recently as 2005. And older generations have changed their minds as well; 53% of Gen X and 52% of Boomers now back changing federal laws.

The Silent Generation remains opposed to changing drug laws, supporting the status quo by 70%. The youngest members of that cohort are now 69 years old. But if the change in attitudes among Americans in just the past few years is any indication, it won't take the Silent Generation reaching the end of their lifespan for widespread support to peak.

Utah will soon become the 22nd state to legalize medical marijuana. And nearly twice as many Americans think that sugar is more dangerous than marijuana (let alone tobacco and alcohol, both of which outpace weed by large margins).

At this point, it's more than likely ... it's statistically inevitable. Like it or not, legalized marijuana will be coming to the whole country in the coming decades.