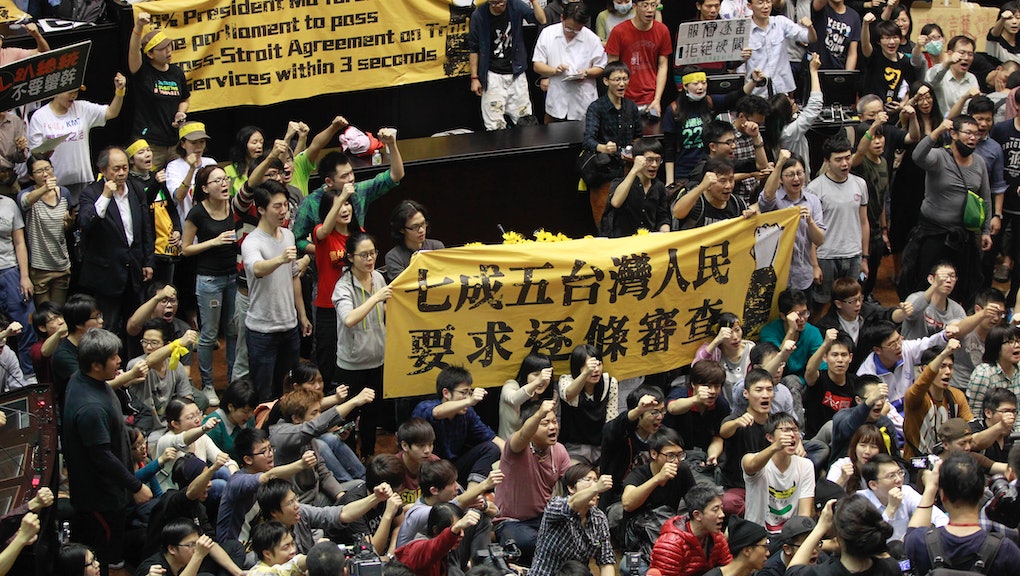 While Putin "reclaims" Crimea as Russian territory, many citizens of Taiwan fear an impending deal between China and Taiwan could mean the end of their own independence. Over 1,000 students stormed the country's national legislative building earlier this week, joining opposition leaders in protest of a imminent economic pact between China and Taiwan.

So who are the protesters?

Members of the DDP have started a 70-hour hunger-strike just before the students stormed in. Together, they are hoping to block the Friday, March 21 meeting over the deal.

What exactly is the deal in question?

The debate pact is called the Cross-Strait Services Trade Agreement (CSSTA) and is part of the Economic Cooperation Framework Agreement (ECFA). The deal, if ratified by Taiwanese MPs, would integrate Taiwan into China's economy through economic liberalization, or opening it to more free-trade markets.

What are protesters demanding?

Protesters demand that Taiwanese President Ma Ying-jeou apologize to the people over the trade pact and that the ruling Kuomintang (KMT) party stop the deal's implementation. While the deal, part of the larger ECFA has already signed in June 2013, Taiwan's legislature has not yet ratified it. They fear the deal will bring grave economic and political consequences.

"The trade pact must not be approved without careful deliberation and scrutiny in parliament," a student leader said according to the AFP.

Is cooperation new for China-Taiwan relations?

A meeting earlier this week between representatives of China and Taiwan was heralded by many as a positive move in the historically tense relationship. It was, in fact, the first time leaders from the two countries have met since 1949 when Mao Zedong's Communists defeated the Nationalists, who then fled to Taiwan.

But thousands of Taiwanese citizens erupted in anger over the imminent trade deal the meeting signaled. They fear Taiwan will soon lose its political and economic independence as the the super power looms ever closer to the deal.

What is China's attitude towards the island?

Though Taiwan is an independent, self-governing country, China still regards it as its own. The huge world power has previously threatened to use military force on Taiwan should it take too many actions to separate itself from China.

Will they stop the deal?

With the U.S. and China in support of the proposed deal, the success of the protest movement seems unlikely, though not impossible. While the deal may very well jeopardize Taiwanese independence, it signals cooperation between the two countries and has been touted to usher in financially advantageous change.

"I don't think this is going to threaten the overall passage of the pact, though it may delay it a bit," said Lu Ya-li, a professor of political science at Chinese Culture University in Taipei to Al Jazeera. "But this pact is too important for Taiwan's economy — it will pass regardless."

What has been the Police response?

Current reports have not documented violence against the protesters, though reports say four have been detained. A statement by the KMT Policy Committee Chairman Lin Hong-chi, however, reveals that the country's forces are not happy.

"From last night until the present moment, a portion of the populous has been misled by a small number of people with ulterior motives into occupying the Legislative Yuan. This has caused great harm to Taiwan's democracy. How sacred are the halls of parliament. To trample on a palace of democracy is to trample on parliament, which is the same as trampling on the people," said Lin, according to VOANews.

As over 1,000 students and government leaders continue to protest the China-Taiwan economic deal, Friday's meeting looms ever closer. A critical time in Taiwan's history and a defining moment for its economic identity, the world will be watching intently to see if demands are negotiated, met or squashed.