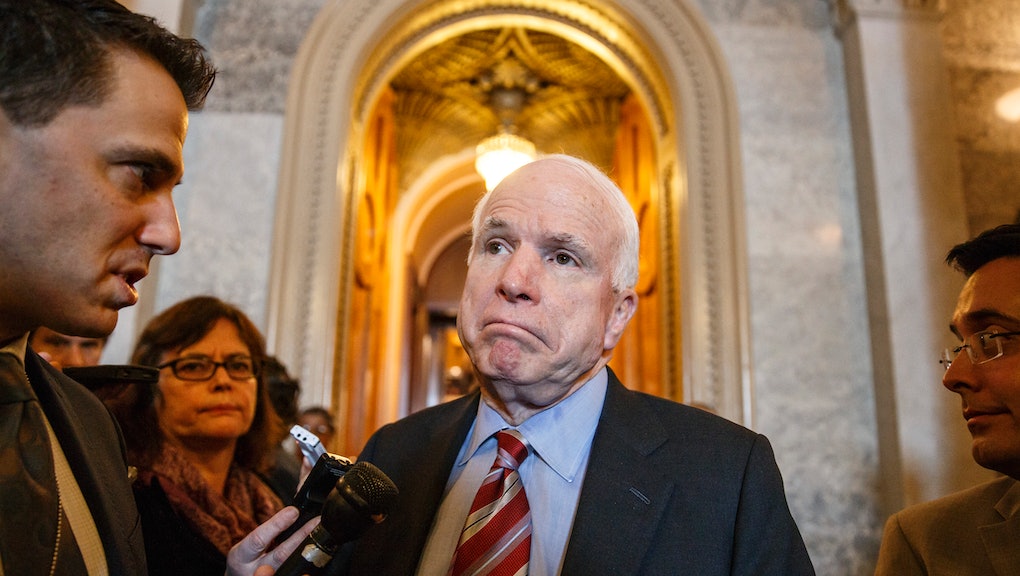 In the latest round of international sparring over the crisis in the Ukraine, officials from both Russia and the U.S. have issued bitterly funny retorts to mutual sanctions on the other country. Hands tied by the impossibility of using force, the West's power to do anything other than issue sanctions is suspect. But the U.S. has moved to target some 20 officials including senior Russian advisers and "cronies" and a major Russian bank. Assets were frozen, visas were seized and the Russians were unmoved.

A war of words: Here's what Vladislav Surkov, a Kremlin official described by The New Republic as the "chief architect of Putinism," had to say:

"The only things that interest me in the U.S. are Tupac Shakur, Allen Ginsberg, and Jackson Pollock. I don't need a visa to access their work."

The zinger: That led Sen. McCain to issue a statement widely interpreted as a direct rebuttal to Surkov today:

"I guess this means my spring break in Siberia is off, my Gazprom stock is lost, and my secret bank account in Moscow is frozen. Nonetheless, I will never cease my efforts on behalf of the freedom, independence, and territorial integrity of Ukraine, including Crimea."

"We have repeatedly warned that sanctions are a double-edged instrument and would hit the United States like a boomerang," the Russian Foreign Ministry said in a statement. "There must be no doubt: We will respond adequately to every hostile thrust."

The EU, wary of the damage a sanctions spiral could do, has decided to reserve major sanctions for any further future escalation by Russia, meaning this war of wit will be limited to the U.S. and Russia for now.