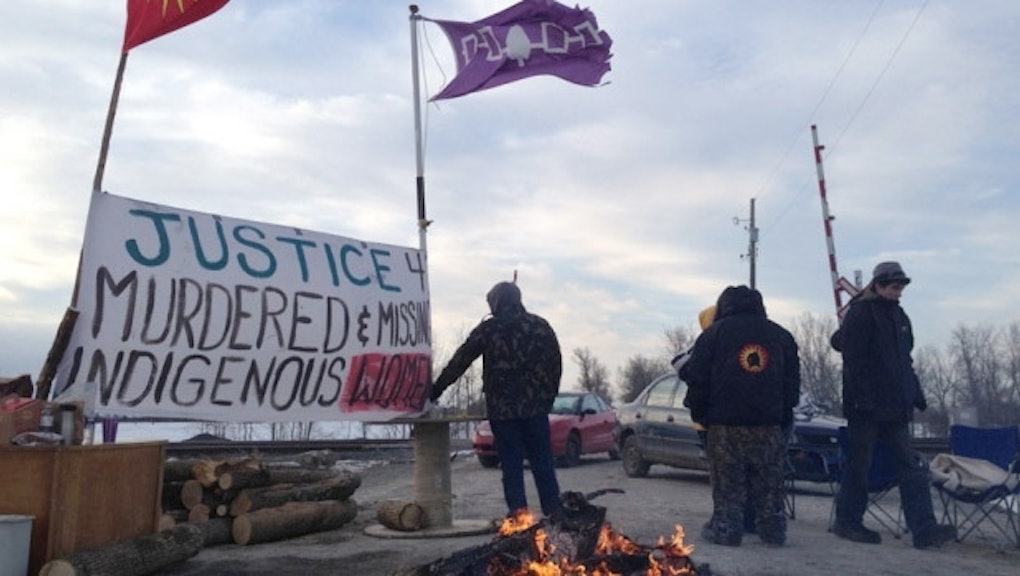 824 Murders and Disappearances in Canada Have Sparked a National Protest

So read a hand-painted sign displayed by roughly 20 demonstrators on Wednesday in rural Ontario, Canada. The group lit a campfire and blocked Canada's VIA Railway near the Tyendinaga Mohawk reserve, halting trains between Toronto and Montreal.

"Today is a national day of action," a protester named Karahkwinetha told the CBC. "Today is about raising awareness and gaining support for the issue of murdered and missing indigenous women. It's a national issue and we choose to take part in unity with other nations."

This demonstration comes after the Canadian parliament released a report examining Canada's epidemic of Aboriginal women who've been killed or disappeared. According to the BBC, the report did not recommend a full public inquiry into the issue, angering many First Nations activists.

The background: In late February, the body of 26-year-old Saint Mary's University student Loretta Saunders was found alongside a highway in New Brunswick.

She was merely the latest in an estimated 824 murders and disappearances involving indigenous Canadian women since the 1950s. According to the Vancouver Sun, nearly 600 of these took place after 1990. The rate is startlingly disproportionate, as indigenous women make up 2% of Canada's population but account for 24.8% of missing or murdered women.

Saunders' murder galvanized activists across the nation, prompting an outpouring of support, solidarity and renewed calls for government action:

A history of violence. Native peoples of North America have endured centuries of physical and cultural violence throughout the development of Canada and the U.S. Thousands of indigenous children were abused, tortured and killed at Canada's "residential schools" in the late 19th and early 20th centuries, all in the name of assimilating them into white Canadian culture.

In the U.S., children living on our socioeconomically depressed American Indian reservations commit suicide at rates three times the national average. "The circumstances are absolutely dire for Indian children," Theresa M. Pouley, chief judge of the Tulalip Tribal Court in Washington state, told the Washington Post. "One-quarter of Indian children live in poverty, versus 13% in the United States. They graduate high school at a rate 17 percent lower than the national average. Their substance-abuse rates are higher. They're twice as likely as any other race to die before the age of 24. They have a 2.3 percent higher rate of exposure to trauma. They have two times the rate of abuse and neglect. Their experience with post-traumatic stress disorder rivals the rates of returning veterans from Afghanistan."

These problems are rooted in the historic devastation unleashed on indigenous peoples by the United States and Canadian governments. In the U.S. alone, the native population dropped from an estimated 12 million in 1500 to 237,000 in 1900. Guess who they met in 1492, around the time the genocide began.

What's next for Canada? With train service resuming today, questions remain as to whether Harper's government will do anything more to investigate the murders and disappearances in response to the protests.

Maryanne Pearce, a University of Ottawa doctoral student who wrote a massive thesis on the issue, is one of many growing impatient: "I would like to see more action and less inquiry," she says.

But with the government's decision to avoid a public inquiry, the future looks bleak. True progress may still be a long way off.