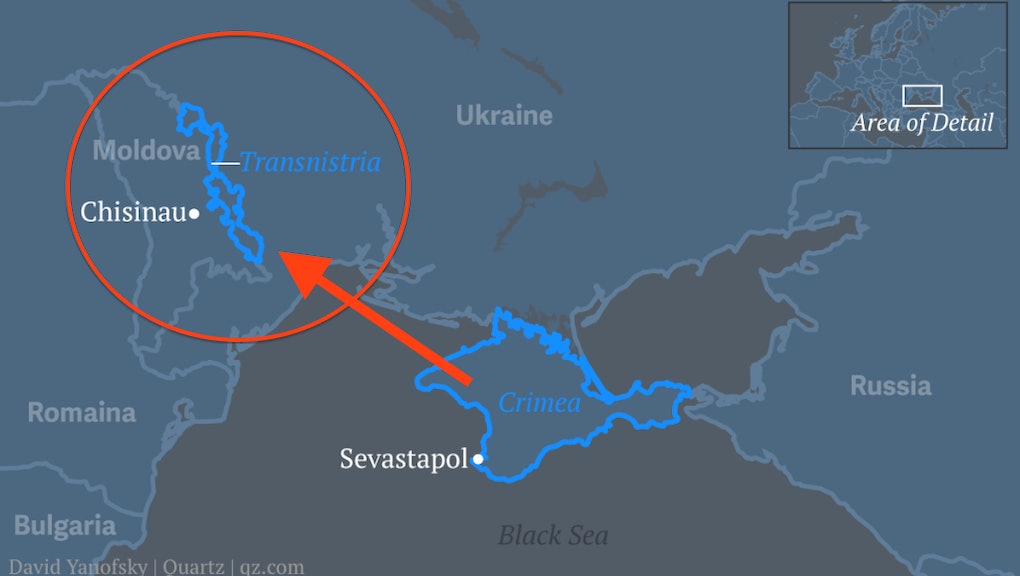 Where Might Russia Invade Next? NATO's Top General Has a Theory, and It's Very Plausible

The news: Following Russia's much-contested annexation of Crimea, all eyes are on the region to see which country or region may follow next. And it seems Russia may already have its next target: the tiny, unrecognized state of Trans-Dniester.

Last Tuesday, Trans-Dniester authorities followed Crimea's example and sent an official request for annexation to Russia. The Russian government is set to consider the request on Thursday, although it may already be taking steps to make the transition happen. Russia has amassed a large military force on the eastern border of Ukraine for military excercises, which some experts have cited as a troubling sign for the region.

"There is absolutely sufficient force postured on the eastern border of Ukraine to run to Trans-Dniester if the decision was made to do that. That is very worrisome," said General Philip Breedlove, NATO's supreme allied commander.

Trans-Dniestrian soldiers lining up during the annual Soviet style military parade remembering the October Revolution in Tiraspol, Trans-Dniester, which is a separatist region of Moldova. Image Credit: AP

The background: Trans-Dniester is home to 510,000 people, of which around 200,000 are of Russian descent. It is roughly the size of Rhode Island and has no internationally recognized currency, Internet domain or airport, although it maintains its own military and police force. The economy is propped up by Russian industrial plants and humanitarian aid, although it also benefits from smuggling, illegal weapons trade and unauthorized subsidies from Gazprom, Russia's state-controlled natural gas corporation.

The region first declared sovereignty in 1990 from the Moldavian Soviet Socialist Republic after the fall of the Soviet Union. Then in 1992, it fought the newly-established Moldova in a bid for secession. The conflict ended with a ceasefire, and Trans-Dniester never gained internationally recognized independence — although its sympathies were quiet clear.

In a 2006 referendum, 97.2% of voters approved of accession to the Russian Federation. Trans-Dniester's government, the Supreme Soviet, has already adopted Russian legislation and declared Russian as the official language. But it has no official status in the international community, not even from Russia. The only states that recognize its sovereignty are Abkhazia and South Ossetia, which broke away from Georgia in 2008 with Russian backing.

Why would Russia be interested? On the surface, Trans-Dniester seems to have little to offer. It is a poor region of what is already the poorest country in Europe, and has very little international presence. But as they say in real estate, the most important thing is location, location, location.

Trans-Dniester just happens to border Ukraine, with Russia on the other side. If Russia decides to go through with annexation, and uses peacekeeping as an excuse (as it did in Crimea), it could send troops to Trans-Dniester and effectively cut off Ukraine on both sides.

Russia already has 2,000 troops in the region, with dedicated support from the local government. While it may not be the most flashy feather on its cap, Trans-Dniester may very well be a stepping stone to increase Russia's dominance in the region.