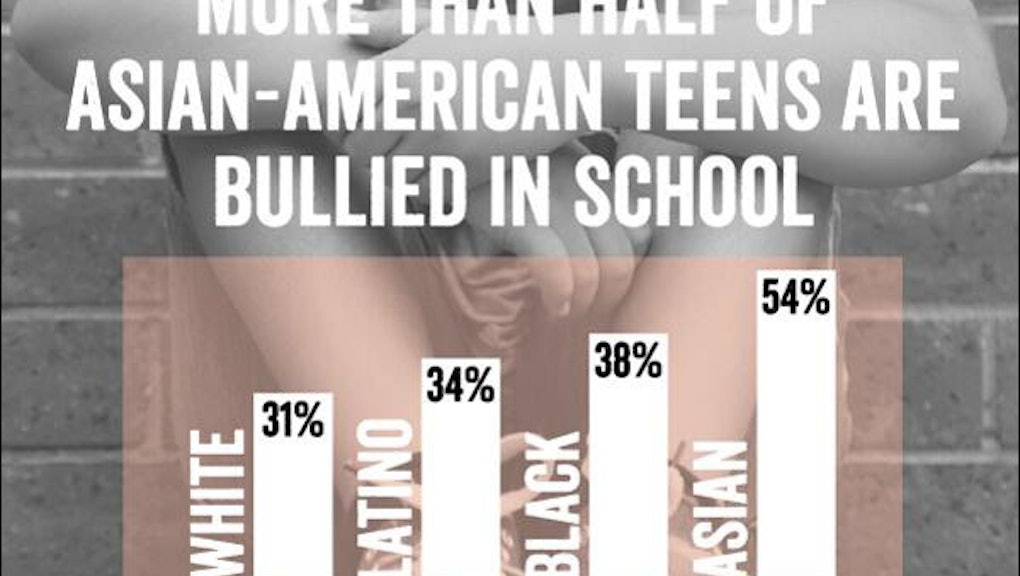 The news: While bullying remains a problem among all racial and ethnic groups in the U.S., new data indicated that one group of children is affected the most: Asian Americans.

More than half of all Asian American students are bullied in school, according to a joint study by the U.S. Justice and Education departments. That statistic was much higher than what they found for other groups. (For the purpose of the study, "Asian American" included students of East Asian, South Asian and South Pacific heritage.)

Singled-out: The study also found that Asian American students were three times as likely to be cyberbullied than students from other ethnic groups.

"This data is absolutely unacceptable and it must change. Our children have to be able to go to school free of fear," Education Secretary Arne Duncan said about the study's disturbing results.

A New York City bullying study reported similar figures, with a 20% increase between 2009 and 2012 of Asian American students being bullied.

Schoolyard racism: Sikh students around America have also become especially popular targets for bullies: 67% of those who wore turbans to school reported being bullied for their religious wear. Most common slurs included "terrorist" and "bin Laden" (no matter the fact that Sikhs are not Muslim or Arab — not that that would excuse bullying, of course).

"Brown skin and turbans have popularly become associated with terror," the Sikh Coalition study explained. "Crude popular culture stereotypes of terrorists and damaging media images outside the classroom have made their way into the classroom, to the detriment of young Sikhs."

While these troubling figures have spurred some action to promote anti-harassment measures in school, the fact over half of all Asian American students go through bullying provides a disheartening snapshot of what it's like to be Asian in America today.