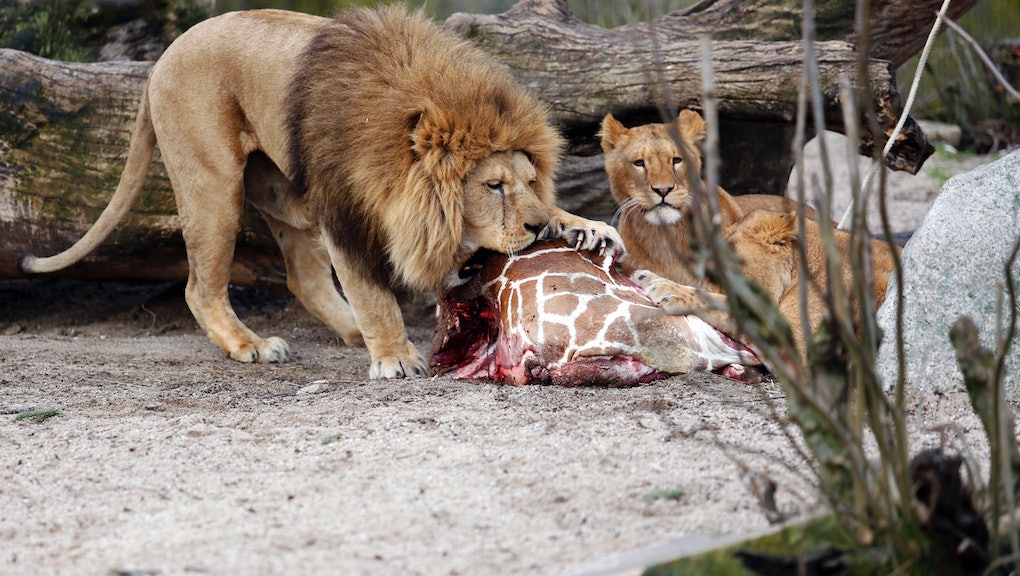 The same Danish zoo that provoked an international outcry by shooting, publicly dissecting and feeding Marius the Giraffe to lions has come under fire again for euthanizing four healthy lions to make way for a new three-year-old male who posed a danger to the existing pride.

"Because of the pride of lions' natural structure and behaviour, the zoo has had to euthanise the two old lions and two young lions who were not old enough to fend for themselves," the Copenhagen Zoo said in a statement. Zoo officials claimed that the new male would have killed the 10-month-old cubs "as soon as he got the chance."

Killed were a 16-year-old male lion, a lioness of similar age and two female cubs. Zoo director Steffen Stræde says that they don't fear the same anger from the public as after the giraffe incident.

"I think people are more enlightened after Marius," he told Ritzau news bureau. "Marius hasn't made us the least bit afraid, because what we are doing is the most correct thing to do."

He added that the new male would be introduced to the park's two remaining female lions of breeding age: "The zoo is recognised worldwide for our work with lions, and I am proud that one of the zoo's own brood now forms the centre of a new pride of lions."

While the zoo's practices might seem cruel to Americans, they fall in line with the Copenhagen Zoo's established procedures maintaining its position as part of an international breeding program. As PolicyMic's Lucky Tran previously wrote:

"To maintain a healthy giraffe population across European zoos, genetic diversity is key. Genetic diversity preserves a broad array of traits that enhance survival of a species that would be lost through inbreeding. Inbreeding also increases the risk of hereditary diseases, and therefore is a significant risk to small, captive populations. To maintain a successful breeding program the Copenhagen Zoo annually euthanizes some 20 to 30 healthy animals, which are considered genetically unfavorable for reproductive purposes. In modern zoos, a large importance is placed on maintaining genetic repositories that reflect gene pools in the wild, especially with many creatures under the threat of extinction."

American zoos prefer contraception to prevent animal containment facilities from reaching their carrying level, but European zoos typically utilize euthanasia. That's because contraceptives can lead to reproductive tract issues and behavioral problems when animals are prevented from carrying out their normal mating rituals. Instead, European zoos strive to emulate "natural" behavior in animals and cull the population when necessary. The issue is no doubt more complicated when dealing with predatory animals like the lions in question, who have a greater chance of harming or killing other members of the zoo's stock.

That doesn't let the Copenhagen Zoo entirely off the hook, though. They failed to adequately address why they rejected requests from other facilities like the Yorkshire Zoo to take in Marius the Giraffe, and the giraffe's subsequent dissection in public raised serious ethical questions. Tran described the decision to go forward with the autopsy thusly: "The Copenhagen Zoo’s deafness to public opinion and insensitivity in this case is shocking."

But each case has to be judged on its own merits. Twitter is pretty angry about this one:

Yet the euthanasia of healthy animals across Europe is widespread. According to Dr. Lesley Dickie, executive director of the European Association of Zoos and Aquaria, 3,000-5,000 animals are killed a year across the continent's zoos. "That's our estimate for all animals management euthanized in the zoos, be it tadpoles up until a giraffe," she told BBC Radio 4's The Report. "Less than a few hundred" of these are large animals like giraffes or lions.

Fortunately, the four lions euthanized by Copenhagen Zoo will not be publicly autopsied.