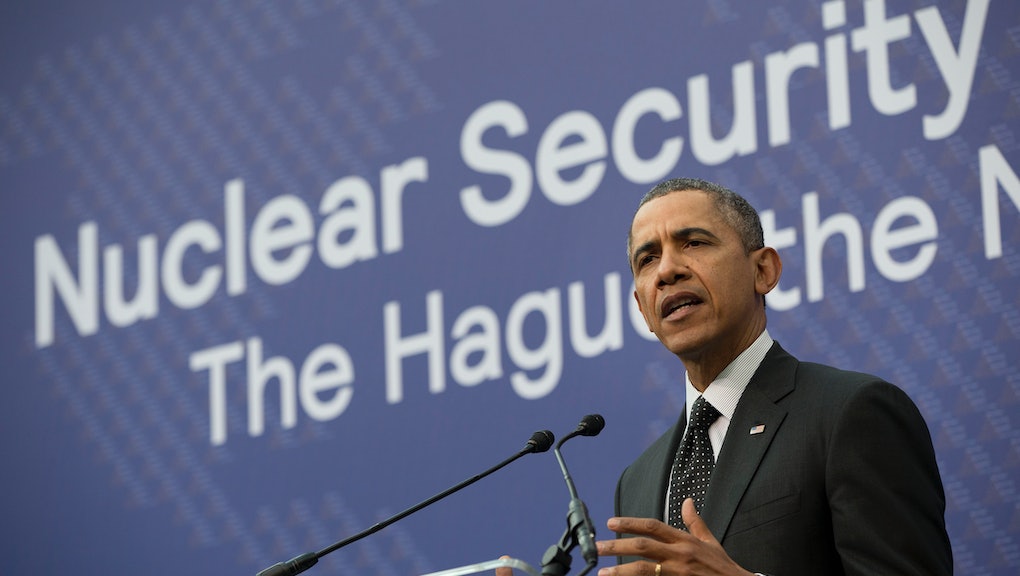 On Tuesday, President Barack Obama concluded a two-day nuclear summit in The Hague, Netherlands, and scored a big coup for the United States: Hours before the final press conference, Japan announced that it would turn over its supply of weapons-grade plutonium and highly enriched uranium to America for disposal. The move is expected to cool regional tensions with China, which has accused Japan of preparing a nuclear weapons program.

Still, that apparently wasn't impressive enough for ABC News' Jonathan Karl. Instead of asking about nuclear security — you know, the actual purpose of the summit — the reporter took the opportunity to needle Obama with a popular talking point: that Obama was weak on Russia, something Republicans have warned about in the past.

"In China, in Syria, in Egypt and now in Russia, we've seen you make strong statements — issue warnings that have been ignored. Are you concerned that America's influence in the world — your influence in the world is on a decline?" Karl asked, adding that during the 2012 election, rival Mitt Romney had called Russia "our number one geopolitical foe."

But if Karl was hoping to stump or fluster Obama, he failed. As calm and unflappable as ever, the president reminded him that no, America can't just invade every country that's posing a problem to the international community.

"I think that there's a distinction between us being very clear about what we think is an appropriate action, what we stand for, what principles we believe in, versus what is, I guess, is implied in the question that we should engage in some sort of military action to prevent something," Obama said. "Where our own self-defense may not be involved, we may not act militarily."

The president's measured response not only downplayed Cold War rhetoric, but also Russia's influence on the world stage. "America's got a whole lot of challenges. Russia is a regional power that is threatening some of its immediate neighbors, not out of strength, but out of weakness," he said. It was a firm yet statesman-like response — unlike, say, "The only thing that can stop a bad guy with a nuke is a good guy with a nuke."

The situation in Ukraine is still a developing concern, but Obama managed to take an unwavering stance without unnecessarily escalating tension. He may be refusing to flex military muscle, but calling Russia "a regional power" is still weapons-grade political shade.