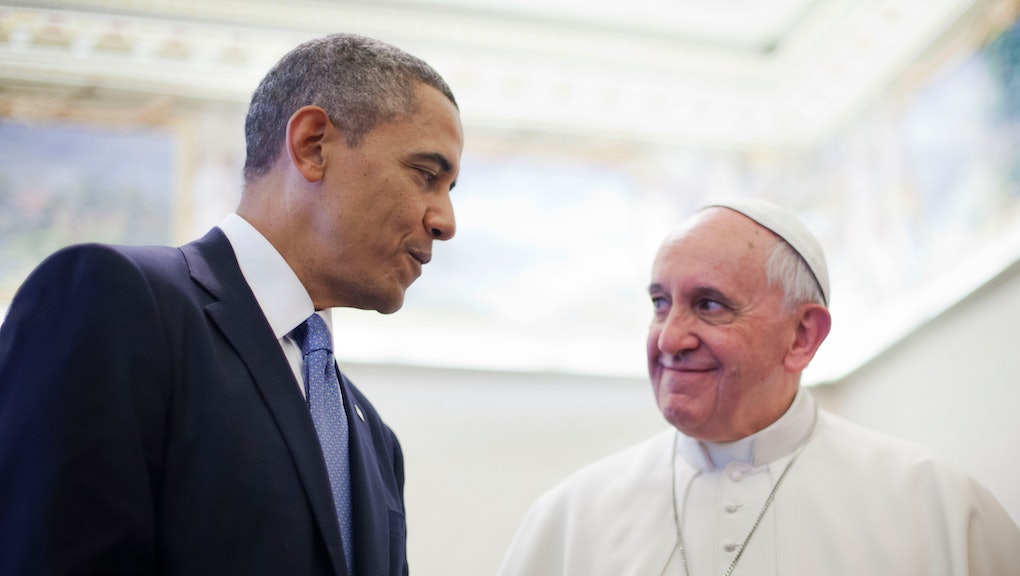 The Pope and Obama Have More in Common Than You'd Expect

President Obama and Pope Francis met Thursday in a highly-publicized and amicable sit-down at the Vatican. In a private meeting, the two leaders had a 52-minute conversation on their mutual interest in addressing issues such as poverty, human trafficking and immigration reform. Evoking both cautionary hope from young progressives and disapproval from conservative commentators, the meeting brought together two leaders trying to change the institutions over which they reside.

"His Holiness is probably the only person who has to put up with more protocol than me," President Obama joked at the meeting.

Both have made serious gains in their often-restrictive, protocol-driven worlds. And yet both have disappointed many. It is these crushing forces surrounding these two important leaders that makes their meeting so important.

The progress from both the president and the pope should not be understated. President Obama passed the Affordable Healthcare Act, enacted the much-needed $787 billion economic stimulus in 2009 and created the Consumer Financial Protection Bureau to crack down on risky, unregulated financial practices. Pope Francis was named Time Magazine’s Person of the Year in 2013 for his ushering in a new direction for the papacy, calling for increased help to the world's poor, speaking out against homophobia ("Who am I to judge?") and spearheading new investigations into the church's finances and history of sexual abuse.

Still, both have disappointed many loyal to them. While President Obama calls for immigration reform, more people have been deported under his presidency than ever before. Human rights advocates continue to shed light on questionable drone, torture and surveillance tactics under President Obama. For the pope, angry bishops say the leader has strayed too far from Roman Catholic Church tradition, while progressives urge him to support gay marriage and women's rights.

Led in by decorated guards wearing plume costumes, President Obama's first encounter with Pope Francis was something to see. The two could barely be heard over the incessant clicks of the photographers surrounding them. The two exchanged gifts, with Pope Francis presenting the president with two medallions, one symbolizing the need for solidarity between the northern and the southern hemispheres. He also gave the president a copy of the Evangelii Gaudium, or The Joy of the Gospel, an apostolic exhortation he released last November calling for increased help to the world's poor, according to The New York Times.

The president, in turn, gave the pope a collection of vegetable seeds from the White House garden encased in a box made of wood from the first cathedral to open in the United States, in Baltimore.

A few points of contention were mentioned, but not discussed at length. Serious disagreement between the White House and the Vatican exists over gay rights, abortion and contraception. Overall, reports show that the meeting was fruitful in securing generally positive relations between the two parties in working to solve important global problems.

As the two leaders continue to make important decisions affecting the world, they will also continue to meet, exceed and fall short of expectations at the same time. Representing radically different worlds, these monumental leaders, papal and secular, met in a moment that will go down in history.