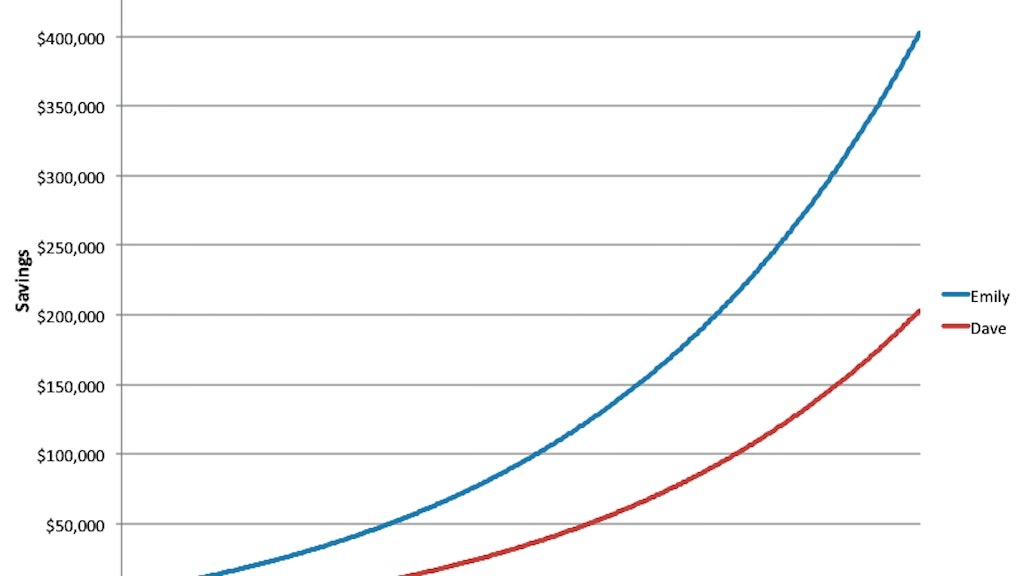 The Blue Line Proves Why You Should Start Saving At 25

If you don't want to be spending your old age as a Walmart greeter struggling to pay the bills, you need to start saving early and saving well. This chart from Business Insider's Andy Kiersz shows how that decade of savings, assuming a $200/mo retirement account with a 6% rate of return, can nearly double your retirement income:

"Emily started saving just 10 years earlier and put in only about 33% more money into her account than Dave put in his.

His analysis is backed by other source. CNN Money points out that putting away $3,000 a year in a tax-deferred account starting at age 25 then stopping at 35 generates a bigger return than saving $3,000 a year for three decades from the ages of 35 to 65. Essentially, the sooner you start saving, the better, and your 20s are prime saving-for-retirement years.

The only catch? If you're actually in your 20s, there's a good chance you're rolling your eyes at the idea you could afford to sock away $200 a month for a retirement account, because you're pretty likely to be under- or un-employed and making less money than previous generations. A 2009 study of young people found that 20% of employees aged 21-30 had seen a pay cut since 2008, and 14% had suffered from layoffs. It's much more difficult for millennials to garner a decent salary than it was for their parents, with the generally accepted $42,000 median income taking until age 30 to reach, up from 26 in 1980. And despite a sluggish economic recovery that's seen unemployment fall to 6.6%, the number of "unemployed, the underemployed and the discouraged" (the U-6 rate) hovers around 12.7% of the total workforce.

According to Pew, millennials are the first American generation in the modern era to have "higher levels of student loan debt, poverty and unemployment" and "lower levels of wealth and personal income" than their parents and grandparents.

The current generation of young workers suffers disproportionately from the poor economy. Jordan Weissman at The Atlantic points to this recent Pew report, which shows that millennials have it worse in the employment market than the past three generations:

Previous generations have faced other major difficulties (the Silent Generation suffered through the Great Depression, for one), so that's not to say the current generation of young people doesn't have certain advantages. But as Weissman writes, "Still, consider this chart something to clip and save for the next time someone writes a column about why so many kids today seem to live in their parents' basements."

Or, in a decade or two when people are writing about the looming millennial retirement crisis, why so many young people couldn't afford to begin saving in their 20s.