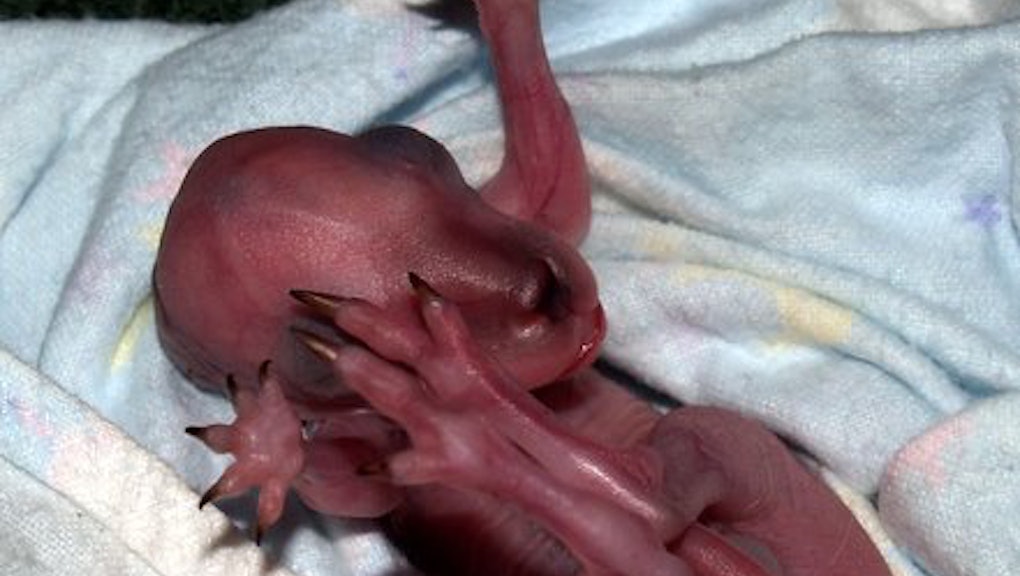 The news: A story from hoax site News-Hound claiming that British scientists from Liverpool's John Moore University have successfully cloned an Apatosaurus is getting a lot of traction on the Internet this weekend. But ... no, they haven't.

The dinosaur, a baby Apatosaurus nicknamed "Spot," is currently being incubated at the University's College of Veterinary Medicine.The scientists extracted DNA from preserved Apatosaurus fossils, which were on display at the university's museum of natural science. Once the DNA was harvested, scientists injected it into a fertile ostrich womb."Ostriches share a lot of genetic traits with dinosaurs," said Dr. Gerrard Jones, a biology professor at LJMU and the project's leading scientist. "Their eggshell microstructures are almost identical to those of the Apatosaurus. That's why the cloning worked so perfectly."Those in the scientific community say the dinosaur cloning – the first ever of its kind – is a milestone for genetic engineering."I used to think this kind of thing could only happen in the movies," said Dr. Gemma Sheridan, a LJMU chemistry professor. "But we're making it happen right here in our lab. It's astounding."

Yeah ... no. Never mind the lack of sources, links or the various ludicrous stories lining News-Hound's sidebar (the name Gemma Sheridan, for example, was used in a previous hoax claiming Google Earth found a woman trapped on an island for seven years). Or that it would take approximately 10 seconds to verify that the photo of a "dinosaur" baby is actually a newborn, furless macropod (a kangaroo or wallaby). Somehow some people bought it:

In the reality-based community, a real-life Jurassic Park is not happening anytime soon. Aside from the obvious ethical issues, scientists have been unable to extract DNA from insects fossilized in copal (solidified tree resin), and only small traces of DNA-containing soft tissue have been found in dinosaur fossils. At best, scientists might be able to sequence small segments of dinosaur DNA, but that would still leave them far short of even a basic framework with which to construct synthetic dinosaurs.

Fool me once ... This isn't News-Hound's first rodeo. Previous hoaxes on the site include the aforementioned Google Earth story and an article that claimed a Chinese man sued his wife over their ugly baby and won. Each page on the site comes with a clever pop-up reminder to "Please support by sharing," which might explain why these kinds of articles — which used to spread through chain emails and the like — are now infiltrating social networks.

Rougly 98% of Americans distrust the information they read on the Internet, and 94% believe "bad things can happen as a result of acting on inaccurate information online." But it seems like more than 2% of Americans are gullible.