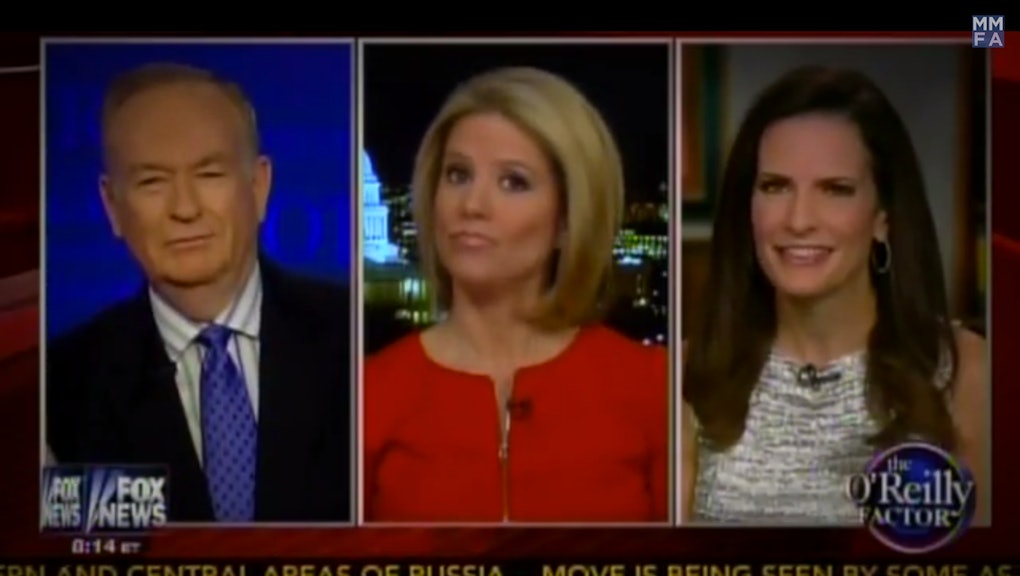 Watch This Mash-Up of Women 'Kicking Ass on Cable News'

Mothers who work full time are irresponsible parents, right? And women shouldn't have autonomy over their own reproductive organs, right? And the U.S. can't really have a female president, right?

Thankfully, we have a group of women doing their part to try to dispel these myths, either as hosts or guests, at least as far as cable TV audiences are concerned.

Media Matters, a nonprofit that monitors misinformation in the U.S. media, noticed this trend and collected footage of several recent incidents when women have kicked some serious sexist ass on cable news.

The video kicks off with FOX's Bill Cunningham shouting condescendingly at attorney and Fox contributor Tamara Holder during a conversation about the national debt: "Is 20 greater than 10, Tamara? Earth to Tamara: Is 20 greater than 10?" After questioning Holder's mathematical abilities, he also tells her, "You don't look like a Catholic girl to me," adding that she looks more like a "Farah Fawcett wannabe."

Holder's reply: "Are you talking to me like I'm an alien?"

The patronization and alienation of women is a major theme throughout the Media Matters clips, which include topics ranging from abortion rights to working mothers.

"It strikes me that a lot of times with women we aren't portrayed as whole beings. We're pigeonholed into this category or that category. Why is it so hard to believe that a woman who is smart and capable is also a loving daughter, a loving wife, a good friend?" asks Karen Finney on MSNBC's Disrupt.

The video also features the now-infamous clip from February in which host Bill O'Reilly asks Fox News contributor and USA Today columnist Kirsten Powers and Republican strategist Kate Obenshain, "There's got to be some downside to having a woman president — something that may not fit with that office. Correct?"

Powers shuts him down with a look and a simple answer: "I'm going to say no, Bill."

Of course these aren't the only women — or men — standing up for women's issues in the media. Popular comedian Chelsea Handler recently penned an article for The Huffington Post questioning why her successful show was sidelined to mere parentheses in a New York Times article about late-night television hosts.

But there is much work left to be done. A quick Internet search for information about women in cable news results in pages and pages of condescending hits commenting on the length of anchors' skirts and other descriptions that undermine their professional standing.

As MSNBC's Melissa Harris-Perry says in the mash-up video, now more than ever we see how important it is to have women in power: "Even if we have disagreement on ideological questions, women as breadwinners, but also as business leaders, as Fox News hosts, as elected officials, women on the right, on the left, in the middle, they often try to fight for things that men in all of these places have ignored for decades."