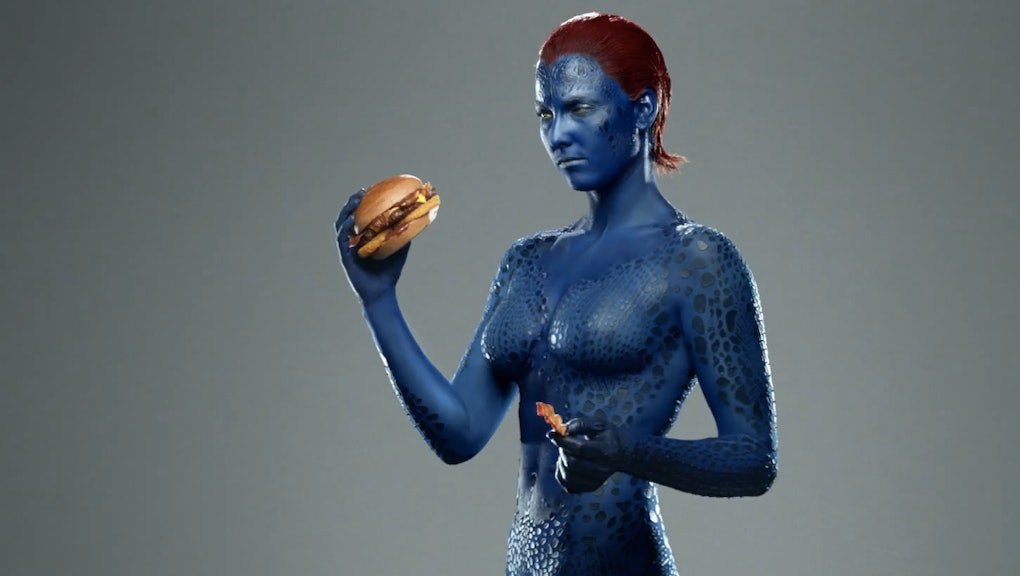 Carl's Jr.'s Sexist New Ad With X-Men Is as Bad for Men as It Is for Women

Hey, women who like burgers: What's wrong with you? Don't you know that only manly men can truly enjoy a fat, juicy burger stuffed full of greasy bacon strips?

For all those women who may have forgotten your womanly place in this world, don't worry; Carl's Jr. and its sibling restaurant Hardee's are here to remind you.

In the fast food chains' latest ad, X-Men shapeshifter Mystique lifts a burger to her lips — only to transform into a square-jawed, stubble-speckled hunk of a man. "Man up," the ad says, because only a real man could take this burger's double bacon action, or because a woman who could stomach this burger must be manly, or something.

This is by no means the first offense from Carl's Jr. or Hardee's. The California-headquartered chain made a name for itself early on with the controversial Miss Turkey spot, which featured the beauty pageant winner strutting down a poolside in heels, eating a turkey burger in slow motion. It truly was a master class in combining the male gaze with fast food advertising.

Then there was the 2011 Anthem ad, accompanied by a press release full of juicy gems. This commercial "communicates the core of what we are about: big, indulgent burgers with no apologies and no B.S.," the companies' marketing boss said. "The campaign focuses on basic truths about our food and our attitude."

Those truths, it seems, are that burgers are for men and women are sex objects designed to sell burgers to those men. "We believe in putting hot models in our commercials, because ugly ones don't sell burgers," the ad says, before switching to two celebs on jet skis: basketball player Kareem Abdul-Jabbar in a full-body wetsuit, and actress Olivia Munn in a skimpy string bikini.

More recently, the burger chains gave us an ad about the search for "great buns," (do you get it?) featuring close-ups of women dancing, doing yoga and climbing escalators; and the "Philly Love" campaign, in which the footballer Terrell Owens chomps into a cheesesteak burger on the beach, flanked by bikini-clad women who stroke his skin and wipe sauce off his mouth.

Last year's Super Bowl commercial was no better. It showed the Danish fashion model Nina Agdal spraying her body with sun oil, sitting on the beach legs akimbo and generally engaging in some sort of sexual relationship with her burger.

It was a cod burger, mind you — because as we know from the fast food chains' latest ad, beef burgers with bacon are only for the menfolk.

This isn't to say Carl's Jr. and Hardee's are the only food companies — or companies in general, for that matter — that just can't seem to get it right with their ads. Yorkie, a chunky Nestle chocolate bar popular in the UK, for years had the slogan, "It's not for girls," along with "Don't feed the birds," "Not available in pink" and "King size not queen size." Just last week, a new Snickers commercial suggested that male builders who yell compliments to women on the street must just be feeling peckish and therefore are not quite themselves.

The problem goes further than just crass commercials, however. These types of campaigns spread the idea that enjoying food is somehow a man's game, which has its repercussions for female — and male, at that — body image issues and eating disorders. And it's not just bad for women; these ads propagate a certain "masculinity" ideal that is harmful for men who, to take this burger example, may get their kicks in life from activities other than having grease drip down their arm or drooling over lotion-lathered ladies writhing in the sand. The need for (and enjoyment of) food is one of the most basic things that unites all of humanity — what good comes out of subjecting it to false gender norms?

To paraphrase Carl's Jr.'s own ad slogan: women like burgers, too, and That's Just The Way It Is. So, like you promised you would, please cut the B.S.