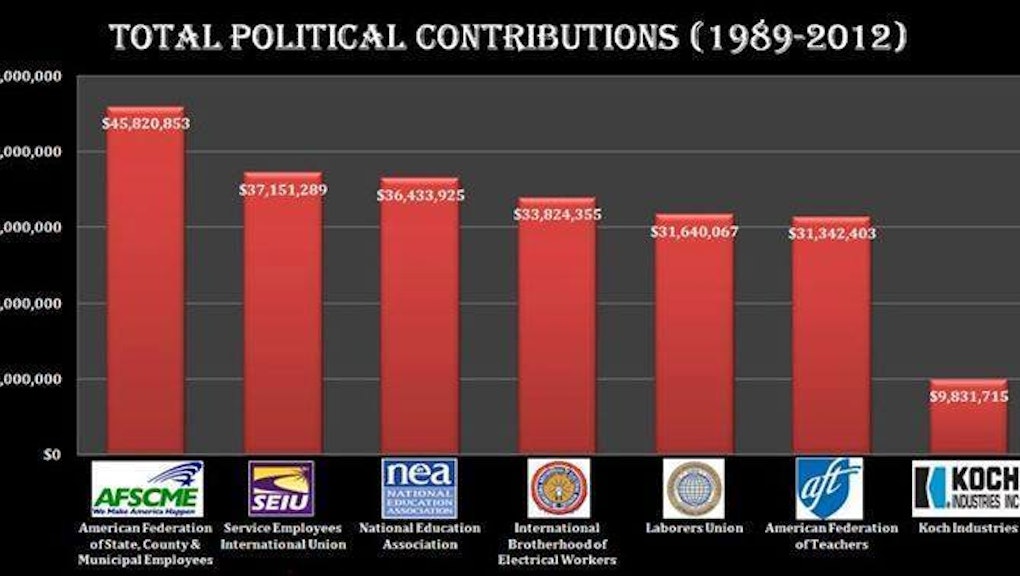 On Wednesday, the U.S. Supreme Court ruled in a 5-4 decision that individuals can donate a limited amount of campaign cash to an unlimited amount of candidates and many liberal pundits are declaring it to be the end of fair elections.

It's ironic, given that the decision could balance out corporate interests, not to mention help Democrats more than Republicans.

The decision (McCutcheon v. Federal Election Commission) comes four years after the Citizens United vs. Federal Election Commission decision (5-4) in which the U.S. Supreme Court ruled that the First Amendment prohibits the government from restricting political independent expenditures by corporations, associations or labor unions. McCutcheon effectively tips the scales back towards individuals.

Like Citizens United, the McCutcheon decision predictably drew the ire of liberal critics who plaster big, bad billionaires like Sheldon Adelson and the Koch brothers everywhere as poster boys for financial influence in politics and chastise these "judicial conservative" decisions on the grounds that right-leaning billionaires will now be "buying election wins" and wield the most influence in politics.

But the truth is not only have liberal donors and their allies been more politically active with their campaign cash than their conservative counterparts over the last 25 years, the myths and public perceptions of how corporations break by party is way more equal thant most people believe (while other donors, such as labor unions, are highly one-sided).

For starters, the amount of money public sector unions spend on political activities make the Koch brothers look like amateurs. Have a look:

In fact, here’s a list of the top 25 political donors over the last 25 years (1989-2014) and how they’ve broken between parties courtesy of OpenSecrets.org:

Bet you weren’t expecting that, were you? As you can see, public sector unions make up more than half the list and overwhelmingly break Democratic.

As far as how corporations break, it’s actually a lot closer than many think. According to OpenSecrets.org’s key, any group that gives between 40% and 59% to both parties is considered to be "on the fence." When you look at the list of top overall donors, almost every corporation falls under the "on the fence" classification. When you break it up further by sector, you find that Academic Institutions, Green Energy, Hollywood, Labor, Lawyers & Lobbyists, Media, and Silicon Valley all lean heavily Democratic while Accounting/Finance, Banking, Defense, Insurance, Oil & Natural Resources, Retail, and Transportation lean slightly to heavily Republican. Physicians and other health professionals break pretty 50/50.

But now the focus has fallen on individuals in the wake of McCutcheon, assuming most of those rich billionaires and millionaires are going to be blowing all their fortunes on conservative candidates and causes, right? Well, guess again.

While it’s true that Adelson set a new record for campaign spending in 2012 with $92,796,625 million on Republican campaigns, the total number of contributors from the top 1% for 2012 was actually pretty even: 56%-44% in favor of conservative interests. In 2010, it was 48%-52% in favor of liberal interests. But thus far in Q1 of 2014, liberal billionaires and millionaires have vastly been outspending conservative ones 61%-39% in a desperate attempt to retain control of the Senate for Democrats with Thomas Steyer, Michael Bloomberg, George Soros and his son Jonathan leading the pack.

Suffice it to say, the outrage seems to be a little one-sided to me. The truth is money has been influencing elections for decades and donors have been finding ways to get around any campaign finance laws for years. The U.S. Supreme Court is simply acknowledging that and rather than living a charade, is acknowledging reality and simply saying go ahead and blow your money so long as you make it transparent. It seems that liberal interests are now worried about the possibility that unlimited funding of candidates and causes (albeit at still limited amounts) may finally actually level the playing field — keyword being "may" — after having a stranglehold on big campaign cash over the last 25 years.

But regardless of which political party wins or loses, the decision tips the balance of power towards individuals interests, giving citizens greater ability to influence elections, likely at the expense of collective or corporate interests. That's something we should all be celebrating.