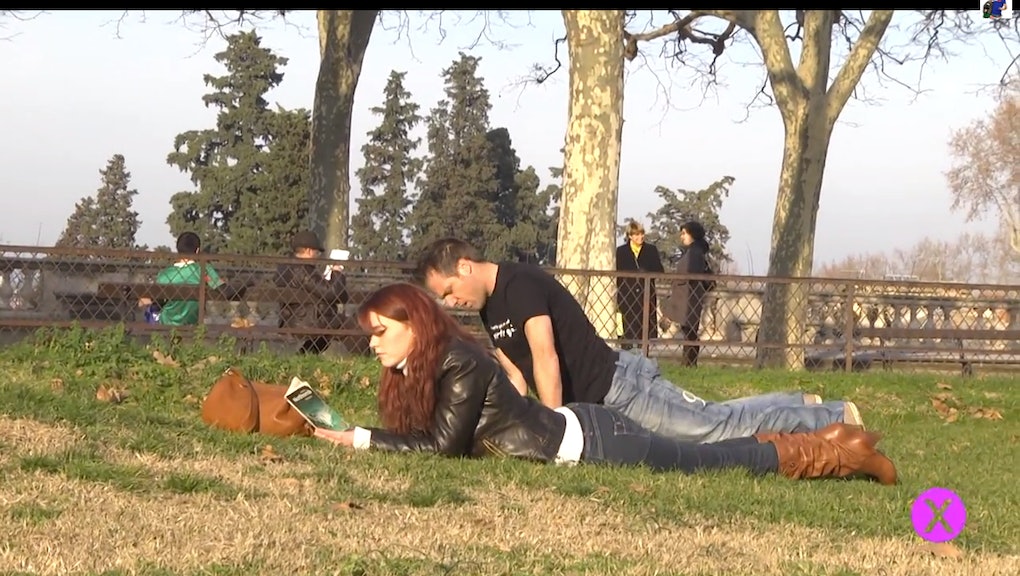 Last week, the hashtag #RapeCultureIsWhen started trending on Twitter, inviting contributions from people who believe that rape culture — the cultural normalization of sexual violence — is a real and dangerous problem.

In the prank, Gaillard stands a few feet away from unsuspecting women and, using the camera's trick of perspective, makes it look like they're having sex. He simulates sex with a woman tying her shoelace on the sidewalk, another reading on a park lawn and a third rifling through her handbag in a grocery store aisle. And he uses women smoking on a bench and eating their lunch in the sunshine to imitate oral sex.

It's hilarious because the victims don't know he's there, but he's having sex with them. Non-consensual sex is the whole joke. It's comedy, guys.

The thing is, it's actually not that funny. The video makes light of rape and presents women as sexual objects there for the taking. It's particularly chilling that the women in his video are going about their daily lives, engaging in activities as simple as grocery shopping and eating lunch.

Roselyne Bachelot, France's former health minister, called the video out for "glorifying rape" according to The Independent. "The film is abject. Absolutely abject. It is rape. The word is not too strong," she said.

Even some of Gaillard's fans thought the prankster had gone too far.

Gaillard defended the video on his Facebook page, asking, "Is there just one way of thinking for women? ... Do some of them have the right to laugh?" Sexism so often hides behind the dismissive notion that feminists just need to get a sense of humor, but for any victim of unwanted sexual attention — from penetrative rape to a catcall on the street — a "joke" that trivializes human autonomy is just not that funny.