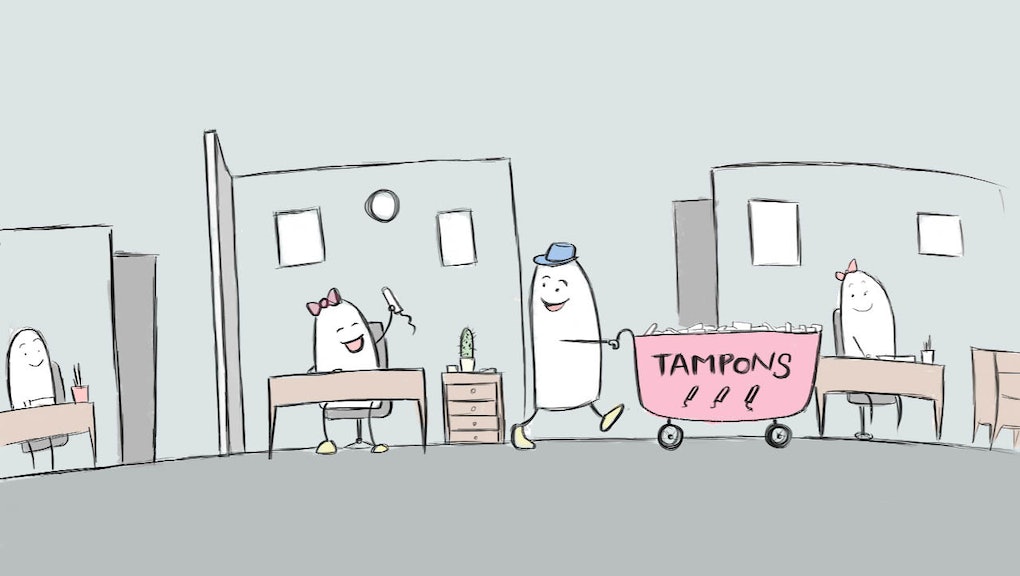 If Men Had Their Period, Would Tampons in Your Office Be Free?

What if, during a job interview, you visited the bathroom and found it fully stocked with all your favorite lady products? Would you feel more inclined to work there? Would you assume that it's a space that's more woman-friendly? As Steven Tyler once said, "If men bled, tampons would be free." Years later, it's worth revisting this question: If men had their periods, would the workplace have free tampons?

Although it may seem trivial to talk about women's hygiene needs, the topic doesn't come without precedent. Long before Sheryl Sandberg was telling women to lean in and #banbossy, female workers were fighting for basic workplace rights, including, incredibly, the right to pee in dignity.

In many U.S. offices, female-only bathrooms are hard to find, nonexistent or flat-out disgusting. Even women elected to higher office have had to fight for equal toilet access. In 2011 a bipartisan congressional committee came together to demand "potty parity." Although male representatives enjoyed a bathroom on the House floor, women had to go outside the chambers buzzing with tourists to do their business. According to a senior aide who spoke to The Washington Post, congresswomen were denied equal bathroom access because the added plumbing "was just too expensive." The committee ended up proposing and passing a bill to ensure that all government buildings provide an equal number of stalls as urinals — but not without pushback.

My point is, free tampons may seem like a niche demand right now, but only a short while ago, so was the right to reasonable access to a secure bathroom.

Naama Bloom, the founder of Hello Flo, a company that provides women with monthly period care packages, has decided to make that change happen. Bloom's idea was inspired by a visit to Google, which stocks its office bathroom with a free supply of tampons and pads. Hello Flo is now expanding its services to help employers stock their bathrooms with sanitary supplies.

"When you think about how much effort and money goes into employee perks, free lunch, snacks, beverages, phones, etc., this just seems like a no-brainer. It's inexpensive and will keep people happy. Who wouldn't do that for their employees?" Bloom told PolicyMic.

So far, companies like DailyWorth, PhotoShelter and Rap Genius have all come aboard the free tampons ship, and their employees are loving it.

Amy Fitzgibbons, director of marketing at PhotoShelter, just received her first Hello Flo package this week. She said the decision to offer free feminine care products to her employees wasn't a tough call. "For the price point, it was pretty much a no-brainer," she told PolicyMic. "A third of our staff is women, and it's something subtle that shows we're a woman-friendly environment. It's not unlike some of the other employee perks we offer from cookies on your birthday to pizza and beer nights. All of those things add up and hopefully show that we want to make PhotoShelter a great place to work for everyone. We're doing it as a gesture to show we get it."

Ezra Glenn, operations manager for Rap Genius, agrees. When I asked him to explain his decision process, he said it wasn't only about practicality, it was about equality. "I'd say it was less of a decision and more of a realization that we weren't meeting our standards of providing for all of our employees," he told PolicyMic. "We strive to create an environment of total comfort and ease for all everyone who works at Rap Genius." Glenn also said that it's part of a broader effort to build a more inclusive world. "I'm really stoked about making this happen here and continuing our crusade to equalize the workplace," he explained on Hello Flo's website.

Why should your boss pay for tampons? Well, she already pays for your toilet paper, and that's not weird, right? If men got a visit from Cousin Red and had to ride the cotton pony every month, we wouldn't even be having this conversation. Sanitary producs would be like toilet paper, considered a necessity, not a frivolous superfluity.

Your boss already pays for everything else in your bathroom, and that should include sanitary products too. So why isn't this conversation happening across all offices in America? One of the roadblocks is that menstruation is a topic that's still taboo. The way men often talk about it is similar to the way bigots used to get away with talking about homosexuality in the '90s: "I'm fine with it as long as I don't hear about it." Although many awesome ad campaigns have helped disrupt those age-old stereotypes, the shame associated with menstruation persists.

Meredith Fineman, founder of FinePoint and a writer covering trends in corporate culture and entrepreneurship, believes that tampons shouldn't be dismissed as office supplies because they're for private use. "While intimate, feminine care products are expensive and it's easy to forget to buy them," she told PolicyMic. "Not to mention offices are becoming more than places of work, especially in environments with long hours."

It's actually surprising that it's taken this long for companies to come around to the fact that bathroom supplies should include tampons. "The fact that this is even considered a 'perk' is pretty amusing too," Fineman told PolicyMic. "Not our choice. I will [defer] to [Real Housewife] Bethenny Frankel here, who has said on many occasions that tampons should be 'government-issued.'"

When it comes to recognizing women in the workplace, there's plenty of work to be done. Valuing your female employees should include doing a lot of things differently, but while we're out fighting the big battles like equal pay, maternal leave and breast pump stations, we shouldn't ignore the little things too. We won't reach gender equality in the workplace by looking at issues in a vaccum. In the words of Naama Bloom, society needs to "commit to making this happen in the conference room and in the bathroom."

Do you think every office should provide female employees with tampons? Let me know what you think on Twitter and Facebook. If you're a boss who wants to provide your employees with sanitary products, you can find all available options at Hello Flo.