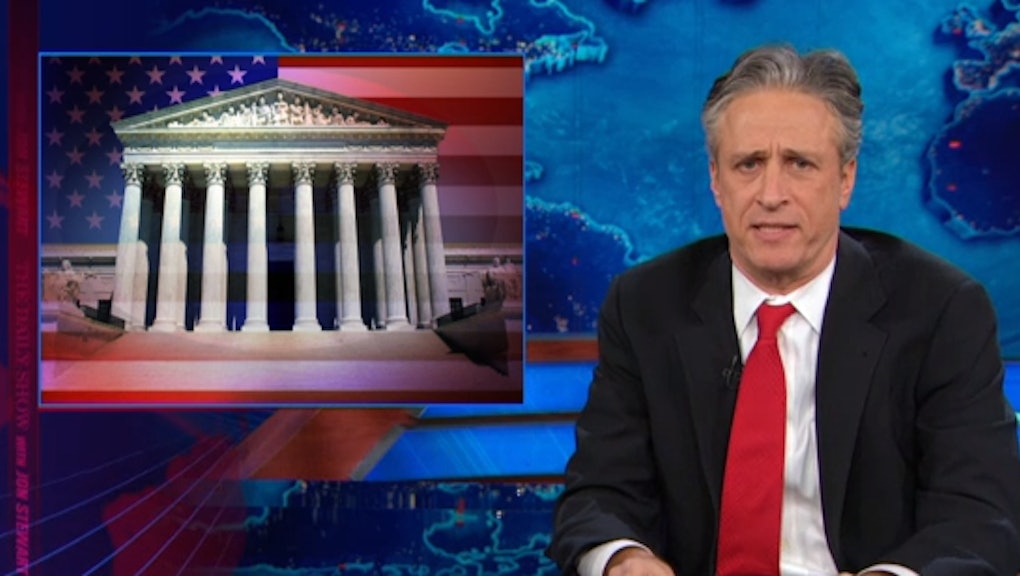 The Daily Show's Jon Stewart hasn't been particularly amused by the Supreme Court's antics as of late — such as being noticeably bewildered by certain preconditions in the ongoing Hobby Lobby lawsuit — but his reaction to their pro-big-money decision in McCutcheon vs. FEC takes the cake.

The case, settled 5-4, lifted the limits on how much money a person can donate to candidates in any given electoral cycle.

"Finally, we're free of the corrosive influence of not enough money in politics," Stewart commented with a confused and defeated look on his face.

Then Stewart launched into a tirade, claiming that the decision would enable the nation's wealthy to write so many checks that "the last great hope of preserving our democracy from the corrupting influence of money is carpal tunnel syndrome."

Stewart attacked Scalia in particular, criticizing his reasoning that "I don't think 3.5 million is a lot of money" and mocking the court's unusual definition of corruption.

Then, the host gave an example of what kind of corruption fell outside the court's narrow view of it as quid pro quo. Stewart pointed to the GOP's attraction to "super-donor" Sheldon Adelson, noting that a pack of future presidential candidates "flew across the country to kiss the scooter-riding-ass of one 80-year-old billionaire. But it doesn't prove anything, you know, right? People on Fear Factor speed-eat a plate of bull testicles for $50,000. It doesn't mean the two are connected. It doesn't mean that money changes their behavior."