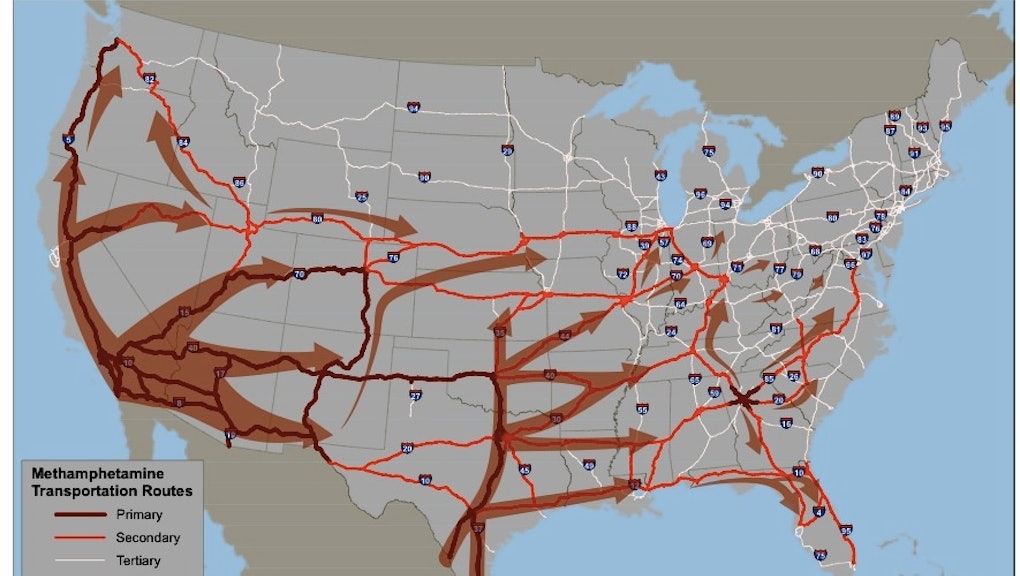 Which Drugs Are Most Trafficked to Your State? Follow the Arrows on These Maps

The maps below show how cocaine, heroin, marijuana, MDMA (ecstasy) and meth enter into and travel around the United States. The maps are from an analysis by the U.S. Department of Justice National Drug Intelligence Center (NDIC). They illustrate NDIC's assessment of the primary, secondary and tertiary highway routes that traffickers predominantly used between 2008 and 2010, the most up-to-date data. The size of the arrows indicates the incidence and volume.

Cocaine is smuggled across the border primarily in Southern California and South Texas. It is transported toward heavily populated cities in the eastern United States. "Atlanta, in particular, has emerged over the past several years as a key wholesale cocaine distribution hub," NDIC reports. They also note that a significant amount of cocaine smuggled into California is headed for Canada. Clearly, a good amount of trafficking and consumption activity is occurring in the Northeast region near New York, Pennsylvania and New Jersey.

Heroin is smuggled primarily through ports of entry (POEs) in Southern California, but increasingly, seizures have occurred in Arizona and South Texas. The DEA's Heroin Domestic Monitor Program for 2011 confirmed that, "South America continues to be the primary source of heroin found east of the Mississippi River, while Mexican black tar and brown powder heroin clearly dominates the drug market west of the Mississippi." Cities with unknown sources of heroin were Atlanta, Chicago, Detroit, New York, San Juan, St. Louis and Washington, D.C. The monitoring program also looks into "geo-probes," emerging cities in the heroin market. In 2011, they were Tucson, Ariz.; Gary and Michigan City, Ind.; Lawrence, Mass.; Memphis, Tenn.; Roanoke, Va. and Madison, Wis.

Traffickers smuggle marijuana predominantly through POEs in Arizona. Seizures at and between POEs in Arizona have accounted for about 50% of the marijuana seized at the Southwest border every year since 2006. The Rio Grande Valley area in South Texas is also a primary crossing point for marijuana smugglers. However, NDIC reports that, "High-potency Canadian marijuana is usually smuggled through and between POEs in Washington, Michigan, New York, and Vermont." Mexico-produced, Canada-produced and domestically-grown marijuana are all distributed nationally. The cost of marijuana rises moving east from the Pacific Coast, with Oregon offering the most bang for your buck. There are also pockets of maximum affordability around other production regions, notably in Northern California, Eastern Kentucky and Western Tennessee.

NDIC reports that, "Large quantities of MDMA are not smuggled across the southwest border with regularity." Seized MDMA in the United States is primarily manufactured in and smuggled across our borders from clandestine laboratories in Canada and, to a lesser extent, the Netherlands. Unlike the other drugs, MDMA is generally transported from POEs in Washington, Michigan, New York and Vermont, and ships to markets throughout the country.

NDIC reports that smuggled meth mainly comes through southern California and that seizures of methamphetamine along the border have increased every year since 2007. Mexican traffickers supply drug markets in the western U.S., but are increasingly supplying eastern markets as well. Meth produced in small domestic laboratory operations is usually consumed locally. In 2011, the highest number of police seizures occurred in Tulsa County, Okla., where police identified 979 contaminated meth lab sites. In a 26-month period, the Tulsa Police Deptartment busted 690 labs at a cost of $118,560,000. Next up was Jefferson, Mo., where there were 472 sites. Other notable sites of lab concentration included: Summit, Ohio (353 labs); Kanawha, W. Va. (235 labs); and Kalamazoo, Mich. (318 labs).

READ: "Which Drug is Your State Most Addicted to? America's Drug Problem, Mapped."