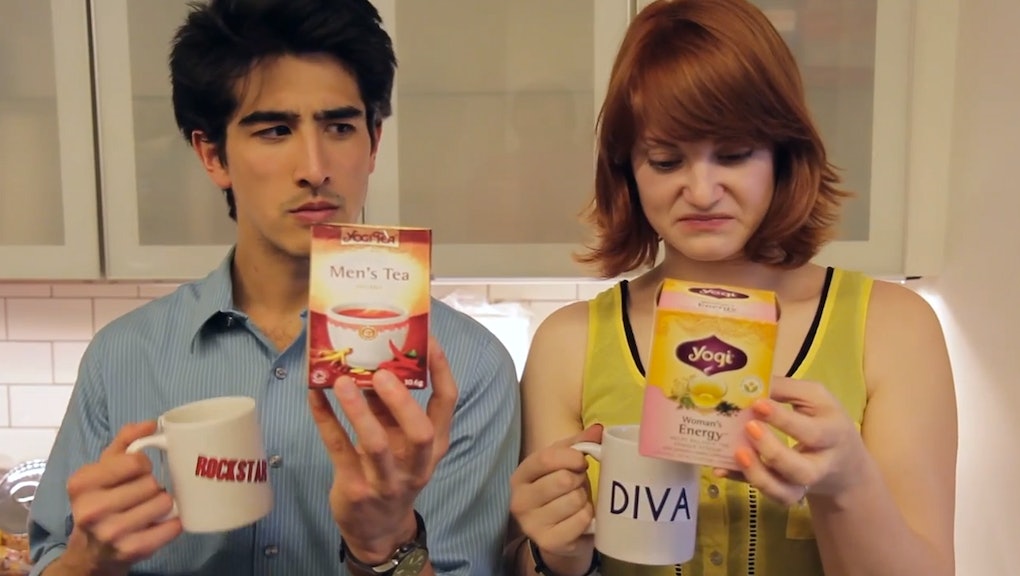 We spend a lot of time talking about children and their commonly understood gender roles, but what if those roles stuck around after childhood?

That's the premise of this BuzzFeed video, which applies traditional children's gender roles to adults in the workplace, showing how arbitrary and far-fetched they are.

Two new employees start work on the same day. David is told he can't wear pink — "it's a girl color" — and is given a blue laptop plastered in stickers of trucks, cars and sports balls. Madeleine is told to put down the Superman-branded duct tape she's using and is handed a dainty roll of Scotch tape in a stiletto-shaped dispenser. David is told to use the "rockstar" and "stud" mugs, while Madeleine is directed toward the "princess" and "diva" mugs.

Wrong. A quick jaunt around the shops will bring up any number of pointlessly gendered products for adults, from earplugs and tissues to chocolate and tea.

But if forcing adults to conform to gender stereotypes seems bizarre, it's just as odd — and even more harmful — that society dictates these tastes to, and places these confinements on, its younger generation. Teaching kids that "boys will be boys" is disadvantageous to girls and demeaning to boys, and it holds young men and women to different standards that they may later carry with them into the workplace, the home and adult life in general.

The good news is that some companies are finally trying to address this baseless gender discrepancy. Goldie Blox, for example, makes toys to encourage girls to become engineers by subverting these gender stereotypes.