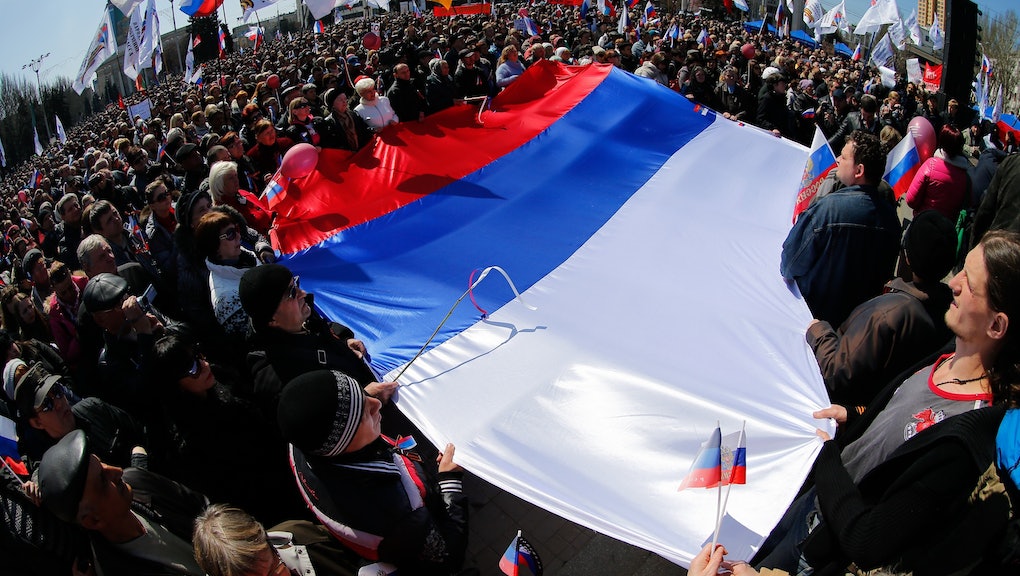 You've Heard of Crimea, But Another Region Just Declared Independence From Ukraine

The news: If you thought Russia's annexation of Crimea was the end to the escalating crisis in Eastern Europe, think again: Another region has just declared independence from Ukraine, and is following Crimea's every footstep towards integration with the Russian Federation.

Donetsk, Kharkiv and Luhansk (with a combined population of around 3 million people), which are home to a large population of ethnic Russians, now officially want to secede from Ukraine. On Monday, hundreds of protesters seized government buildings in the three cities, with those in Donetsk declared the city of one million to be "a people's republic." Though polls in the region indicate that there is still considerable support for a united Ukraine, the separatists have called for an independence referendum to be held by May 11 at the latest.

Ukraine has accused Russia of sending agents provocateur to pose as Ukrainians and foster dissent. "The goal is to ... topple Ukrainian authorities, disrupt the elections and to tear our country apart," said acting President Oleksandr Turchynov, adding that "enemies of Ukraine are trying to repeat the Crimean scenario."

In turn, Russia has accused Ukraine for making it a scapegoat. "Stop pointing at Russia and blaming it for all of Ukraine's current misfortunes!" read a statement on the Russian foreign ministry website. "If the political forces who call themselves ‘Ukrainian leadership’ remain irresponsible toward the future of their country and toward the fate of their own people, Ukraine will continue running into new problems and crises."

The background: Anti-Ukraine protests have been going on in the eastern Ukraine region for over a month, and demonstrators have been firmly against the interim government in Kiev and the ouster of former President Viktor Yanukovych. Donetsk also happens to be Yanukovych's home city and the base of pro-Russian politics.

The demonstrators in these cities have called for Russia to send in "peacekeeping" forces, just as it did in Crimea. There are already 40,000 estimated Russian troops stationed across the eastern border of Ukraine — all Vladimir Putin needs is a pretext to cross it, and these protests just might provide it.

What will happen next? If Crimea is any indication, Russia would be more than happy to absorb Donetsk and any other pro-Russian region that decides to break away from Ukraine. It's an all-around win for Russia: It gets to add new territory without a single military engagement, and it still gets to argue that it was simply following a democratic vote.

Russian foreign minister Sergei Lavrov has indicated that Moscow is in favor of transitioning Ukraine to a federation model and giving increased autonomy to its many, diverse regions. Critics believe that this would only weaken Ukraine as a nation and fuel pro-Russian sentiment. "We can't see any other way to ensure the stable development of Ukraine but to sign a federal agreement," Lavrov said at a press conference last week.