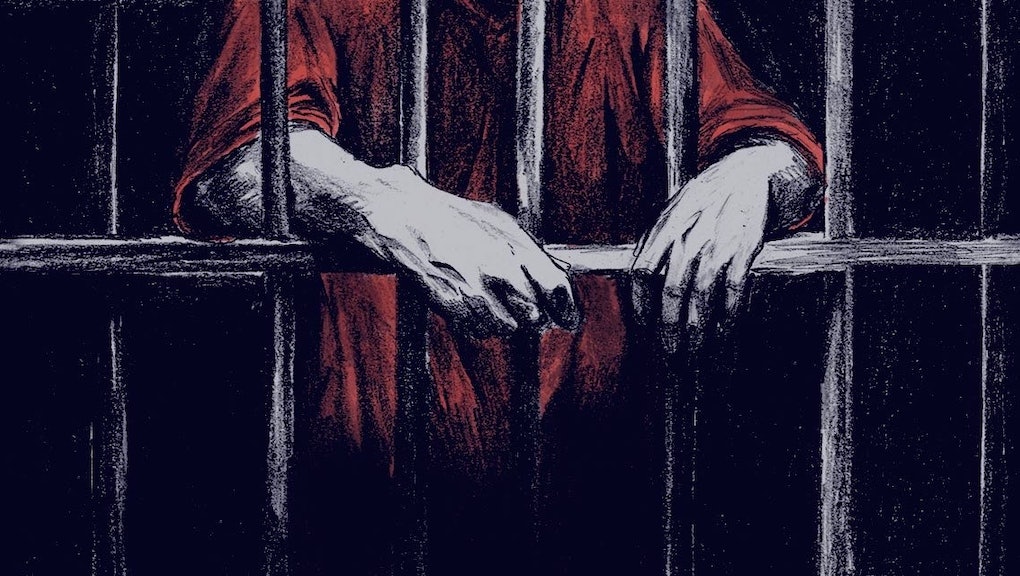 In January 1990, when Jeffrey Deskovic was 16 years old, he was arrested for the rape and murder of his classmate, 15-year-old Angela Correa in Peeskill, N.Y. He was not guilty of the crimes but became a suspect after he was late to school the following day and after he cried openly at her funeral.

"I was driven to the town of Brewster. I wasn't able to leave on my own," he recalled in a recent phone interview. The officers read him his Miranda rights, his right to remain silent, but he did not understand the significance at the time.

It was a school day and his family had no idea where he was. The police officers attached him to a polygraph test after giving him several cups of coffee throughout the day but no food. They played "good cop, bad cop" and interrogated him.

"They told me if I did what they wanted, I could go home," he said. "I took the out which they offered."

After seven hours, three polygraph sessions and extensive questioning from detectives, Deskovic was curled up on the floor in a fetal position, crying. He gave a false confession.

At trial, he pleaded not guilty but was convicted of the crimes despite the fact that — in addition to giving a false confession — his DNA did not match the semen collected from the victim's rape kit. The state argued that the semen had come from a consensual sex partner and that Deskovic killed the victim in a jealous rage. The court ruled there was "overwhelming evidence of guilt," Deskovic said. "It really doesn't make sense," but with wrongful convictions, he added, "The majority of the battle is whether you'll even get a fair review." (Image Credit: Jeffrey Deskovic)

He was sentenced to 15 years to life in prison.

He appealed based on the violation of his Fifth Amendment rights, the right against self-incrimination. "They had threat and false promise. [The confession] was not voluntary." In about 25% of DNA exoneration cases, the defendant had made self-incriminating statements, given an outright confession, or pleaded guilty.

With each year that passed, Deskovic believed he'd only be serving one more year until his next appeal. He would lose the appeal, then focus on the next one. "I was fighting the whole time," he said. (Deskovic prays in court just before his guilty verdict was read. Image Credit: Jeffrey Deskovic)

He was locked in prison while the real rapist and murderer, Steven Cunningham, was free. Cunningham murdered another young girl three and a half years later.

In 2005, Deskovic connected with the Innocence Project, a national public policy organization dedicated to exonerating the wrongfully convicted through DNA testing. The Innocence Project has been involved in roughly half of DNA exonerations to date. Invalidated or improper forensic science accounts for roughly half of wrongful convictions later overturned by DNA testing.

In Deskovic's case, they lobbied to the new district attorney for further DNA testing on Deskovic's behalf. The post-conviction testing, more sophisticated by then, proved his actual innocence. "Actual innocence" is a legal term used to define the technical state of affairs and separate it from, for instance, an admission of guilt with a self-defense plea or an insanity plea. The testing also identified the real perpetrator, Cunningham, who subsequently confessed to the crimes.

In September 2006, Deskovic's conviction was overturned. When he was told that he won the appeal, it took him hours to believe it was true. He went into "mental paralysis," he said.

He was exonerated on Nov. 2, 2006, at age 33. The New York Times wrote, "He had never owned a car, had never tied a necktie, had never balanced a checkbook. He had never voted for a president, had never made love."

The first DNA exoneration occurred in 1989, when the necessary technology was first transferred into the legal system. Since then, there have been 316 DNA exonerations. Eighteen of those convicts spent time on death row and 30 of them had pleaded guilty to the crime they did not commit. Exonerees spent an average of 13.5 years behind bars. The longest-serving DNA exoneree is James Bain, who served 35 years before his conviction was overturned.

And if you've managed to make it that far, you still have another major fight ahead: getting compensated.

It is about accuracy. This is a public safety issue.

It's baffling. In all 50 states, we commonly compensate citizens who, through no fault of their own, have suffered losses. This is simply a principle of fairness in our society. If your land is seized for public use, if you are injured in a car accident at the fault of someone else or if your home is burglarized, you have options for adequate legal recourse to receive payment for damages.

Yet people who are wrongfully convicted and imprisoned — people who have lost relationships, time, psychological and physical health, skills, jobs, property, freedom and reputation — are only compensated in 29 states. And even in those states, the law often falls egregiously short.

According to the Innocence Project, in states where compensation law is not on the books, the person's only option is to file a civil claim, a lawsuit that deals with damages (usually money) and requires action from, say, a company or government entity.

It's extremely difficult to win a civil claim in wrongful convictions because the defendant must prove two things: First, that there was deliberate misconduct by officials; second, that misconduct must have led to a violation of the defendant's constitutional rights. It's very challenging to prove deliberateness. Exculpatory DNA evidence alone does not suffice in this case, even if, by small chance, you have it.

"What concerns people is that [defendants] would get off on a legal technicality and then try to get money from the state. … It's not possible to do that," said Daniella Henry, attorney and legislative policy analyst for the Innocence Project. (Deskovic hugs his mother and brother. Image Credit: Jeffrey Deskovic)

Even for states that do have compensation statues in place, the laws "vary drastically in substance and scope," Henry said. For example, New Hampshire only compensates the wrongfully convicted person a maximum of $20,000, whether a person spent two years or 20 years behind bars. Texas, on the other hand, pays $80,000 for every year of wrongful imprisonment. Some states, such as New Jersey, do not permit compensation to a person if he or she had pleaded guilty. And some, such as Florida, don't allow compensation if the person has a prior felony conviction.

"There are a lot of ways that these laws are very restricted," Henry said.

If compensation is not attainable, the defendant is basically out of luck. There are some organizations that try to assist former inmates with reentry, but none are positioned to provide the kind of comprehensive help that is needed.

John Thompson's story is an enraging example of just how far the injustice can go.

In 1985, Thompson was 22 years old and a father of two young children. He was wrongfully convicted of a robbery and murder and sent to death row at Angola, Louisiana's notorious state prison. In May 1999, as he was facing his seventh execution date, a private investigator discovered blood evidence proving Thompson's innocence. Prosecutors had concealed it for 15 years. The burglary charge was cleared in 1999 and Thompson was taken off death row. He remained in prison until 2001 when the murder conviction was cleared. (Image Credit: AP)

He was released in 2003 after 18 years in prison — 14 of them in isolation on death row. Louisiana's compensation statute, enacted in 2005, was not yet in place. Upon Thompson's release, the state gave him $10 and a bus ticket. He was never compensated and the prosecutors were never held liable for concealing that evidence.

Considering these stories, a few reforms should be put into action. First, measures should be taken to prevent wrongful convictions from happening in the first place. Because the outcome of criminal cases rests on the evidence introduced during trial, reforms should include, among many things: recording interrogations in order to prevent false confessions — as in Deskovic's case — and subsequently submitting those recordings into evidence. There should also be adequate standards for forensic analysis. (Image Credit: The Innocence Project)

In terms of compensation, every state should have fair statutes based on the number of years the person spent in prison. States that already have compensation statutes should re-examine them to guarantee that they are fair and make compensation attainable and adequate. Immediate funds should be provided for successful re-entry into society — funds that cover food, housing and counseling. Longer-term provisions should include medical care, education and job-skills training.

No innocent person freed from jail should be given just $10, a bus ticket and a slap on the back.

And even with compensation, there are overlooked windows. It took New York five years to compensate Deskovic. After he paid out his legal fees — which covered depositions, travel, expert witnesses, filing documents and legal searches — he'd spent about 60% of his compensation sum. Juries don't know this and don't adjust for it, he said.

In the years since Deskovic's release, he's earned his bachelor's degree from Mercy College in New York and his master's degree from John Jay College of Criminal Justice. In March 2012, he launched the Jeffrey Deskovic Foundation for Justice with a donation of $1.5 million from his settlements. On his website, he writes, "I am trying to take a negative that has happened to me and turn it into a positive."

His foundation aims to disseminate information about wrongful convictions for the purpose of raising public awareness, advocate for the passage of legislation designed to prevent wrongful convictions, work to bring about exoneration of wrongfully convicted individuals both in DNA and non-DNA cases and assist in the reintegration of exonerated persons into society.

Deskovic said the biggest obstacle is that "people don't understand what wrongful conviction or exoneration is. There is a perception that [the defendant] got off on some technicality." In reality, he said, "It is about accuracy. ... This is a public safety issue."

In a New York Times op-ed he wrote, Thompson concluded with these thoughts: "If a private investigator hired by a generous law firm hadn't found the blood evidence, I'd be dead today. No doubt about it."

"A crime was definitely committed in this case, but not by me."

READ: NYPD Commissioner-Turned-Felon Has a Message For Us Now That He's Been to Prison