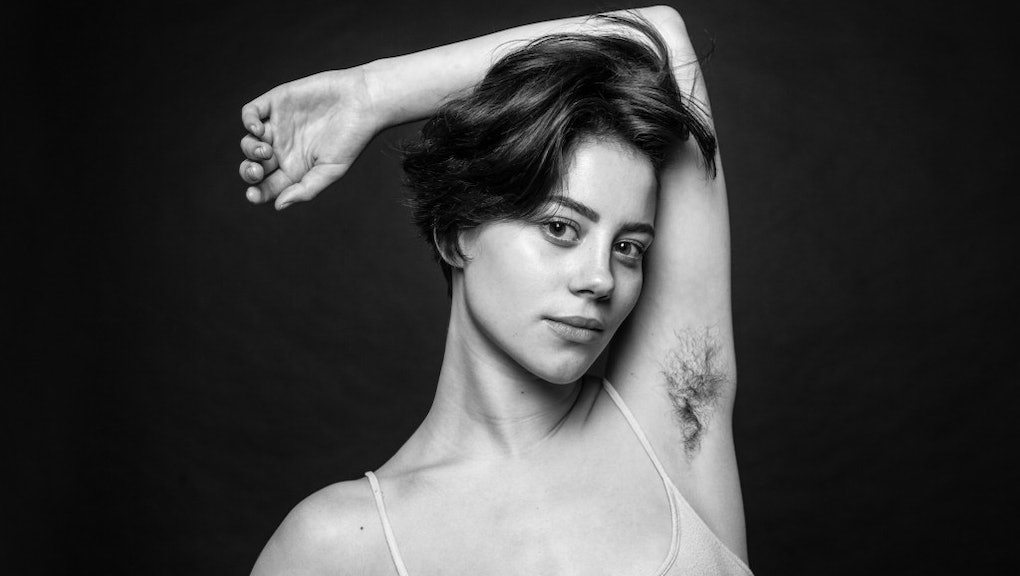 Next year will mark the century since Gillette released its first razor for women, but there's one obstacle to overcome before the smooth skin revolution reaches the 100-year mark: 2014 has been declared the Year of the Bush.

Fifteen years after Julia Roberts delighted the tabloids by revealing a hairy armpit at the 1999 London premiere of Notting Hill, prominent women are once again proudly parading their sprouting pits. Last month Madonna posted a stubbly selfie on Instagram with the caption "Long hair, don't care," a few weeks after Cameron Diaz said the idea that women don't need body hair is like saying "I don't need my nose." Meanwhile American Apparel recently lined its storefront windows with bush-bearing mannequins, and just last week Maureen O'Connor wrote about the "full-bush Brazilian," the new grooming trend that waxes underneath and leaves the pubic mound untouched.

Yet the media attention these stunts have each attracted proves just how out of the ordinary our perception of visible body hair on women is. Just look at Veet's new ad campaign, with its slogan "Don't Risk Dudeness," implying that skin which isn't silky smooth is manly and therefore shameful. In a particularly ridiculous Veet ad, a woman acts embarrassed about her hairy legs — while she's being rolled into an ambulance wearing a neck brace.

Ben Hopper, an artist in London, wants to change this. The photographer has recently published a photo series of black and white portraits, each capturing beautiful women bearing armpit hair. Hopper notes on his blog: "Although armpit hair is a natural state, it has become a statement. Why is that? For almost a century we have been brainwashed by the beauty industry, encouraging hair removal."

"'Natural Beauty' could be classified as a type of protest," Hopper elaborates on his Facebook page. "By creating a contrast between common 'fashionable' female beauty and the raw unconventional look of female armpit hair, thoughts are intrigued and a discussion is made."

Part of the problem, Hopper said, is that advertisers have cornered the market on female hair removal to an extent that borders on brainwashing. "It has to do with beauty brands such as Gillette, who needed to extend their razors' clientele and created one for women about a century ago," Hopper told PolicyMic. "Most people can't even stand the look of a hairy female armpit. Now that is brilliant marketing."

While reactions to the photos have so far been mixed, Hopper said he hopes people can come away from the series with a new perspective on the subject. But the point of the project isn't to tell women how to feel beautiful or how to manage their bodies, Hopper said.

"I don't want to say that I want women to start growing their armpit hair," he said. "I just think that it's a possibility and people shouldn't dismiss it. I'd like people to just question the whole thing."