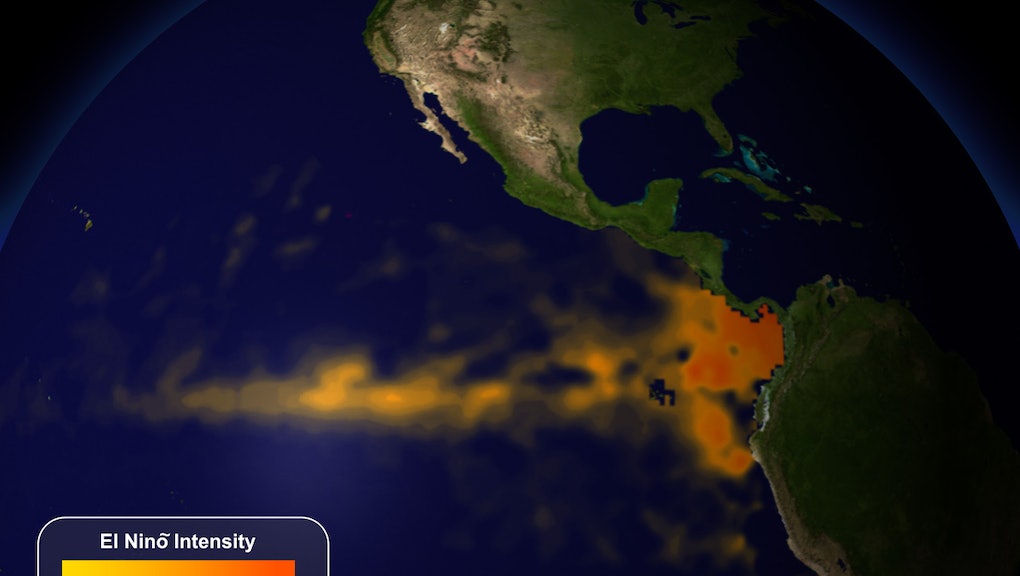 The news: Forecasters are increasingly confident that an El Niño is looming ahead of us for 2014 — and this one could be quite a doozy.

If current forecasts stay on track, El Niño might end up being the biggest global weather story of 2014.The most commonly accepted definition of an El Niño is a persistent warming of the so-called "Niño3.4" region of the tropical Pacific Ocean south of Hawaii, lasting for at least five consecutive three-month "seasons." A recent reversal in the direction of the Pacific trade winds appears to have kicked off a warming trend during the last month or two. That was enough to prompt U.S. government forecasters to issue an El Niño watch last month.Forecasters are increasingly confident in a particularly big El Niño this time around because, deep below the Pacific Ocean's surface, off-the-charts warm water is lurking:

The giant red blob? It's a really, really big underwater wave of "anomalously warm water" that currently spans much of the tropical Pacific. And it's starting to come to the surface.

Will this really happen? The predictions aren't perfect, and there's still a chance the world could slip through 2014 without an El Niño. But Australia's Bureau of Meteorology says that they're pretty confident we have at least a 70% chance of experiencing one this year. The University of New Wales says that the odds of experiencing an extremely strong El Niño event on any given year have doubled from once every 20 years to one every 10. In 1997-98, El Niño cost the globe $35 billion in damage and killed an estimated 23,000 people.

What would this storm mean? A strong El Niño this year could have immense repercussions on the globe, from severe droughts in Indonesia and falling Peruvian anchovy yields to bush fires in Australia and devastated crops from a disrupted monsoon in India. While California might see some relief to its ongoing drought, it's not likely to end it. And FiveThirtyEight warns that even a robust El Niño "could turn out to be more of a threat than a blessing" thanks to landslides and flooding.

Anyone worried about the climate should be very concerned by the looming weather pattern in 2014. ABC News meteorologist Melissa Griffin claims it could be enough to make 2014 the globally warmest year on record, with 2015 even warmer. Why couldn't it just have been the hilarious kind of El Niño?