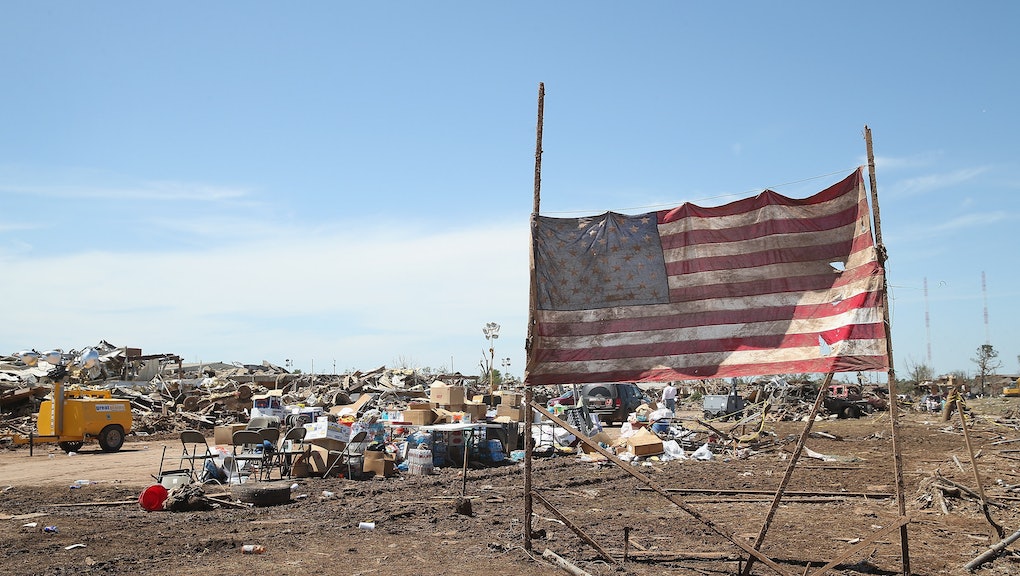 Within a Generation, America Is on Track to Become a Second-Rate Nation

If you've been suspecting America has been rapidly stumbling downhill since the start of the millennium, there's now evidence to back that view. The U.S. is far from No. 1  — it's now No. 16.

New data from the Social Progress Imperative demonstrates that the U.S. is falling behind. The study ranks countries according to their Social Progress Index, which includes not just GDP but variables like "personal safety, ecosystem sustainability, health and wellness, shelter, sanitation, equality and inclusion, and personal freedom and choice."

The results were pretty uninspiring. For the second-richest country in the world per capita ($45,336), we sure are lousy compared to a lot of other countries in the overall ranking. And on specific issues the U.S. stands a lot worse. America ranks 70th in health, 69th in ecosystem sustainability, 39th in basic education, 34th in access to water and 31st in personal safety.

These numbers lead AlterNet's CJ Werleman to conclude America is "fast becoming a second-rate nation," and it's hard to disagree with some of his points. For example:

America's rapid descent into impoverished nation status is the inevitable result of unchecked corporate capitalism. By every measure, we look like a broken banana republic. Not a single U.S. city is included in the world's top 10 most livable cities. Only one U.S. airport makes the list of the top 100 in the world. Our roads, schools and bridges are falling apart, and our trains — none of them high-speed — are running off their tracks.

Where's our money? What is America spending its incredible wealth on, if not health care, infrastructure and the maintenance of its cities? Common Dreams thinks a lot of it is big-business-friendly governance, estimating that frivolous subsidies, corporate handouts and tax policy that lets the richest shirk their tax bills cost a family making the mean income of $72,000 a year about $6,000 yearly — $1,231 of that total is thanks to revenue losses from corporate tax havens. And on top of America's reckless spending appeasing big business, the country spends more on its military than the entirety of either Europe or Asia.

It wouldn't be so much of a problem if all this spending somehow trickled back down to the everyday American, but it doesn't. It's enriching middlemen like the financial services industry and rentiers' industries like Big Oil. It's also going to the 1%. University of California, Berkeley, economics professor Emmanuel Saez estimates that 95% of economic gains from 2009-2012 went to the top 1% of earners across the country. UC Santa Cruz professor G. William Domhoff claims that the 1% controlled 35% of the country's net worth in 2010 and 42% of all financial wealth. (The top 5%? A combined 63% and 72%, respectively.)

These problems have since gotten worse, with a "well-placed member of the sprawling financial services industry" writing for Domhoff's blog noting that "from 2009 through 2011 (the latest available data), the net worth of the top 7% gained 28% while the bottom 93% dropped 4% ... overall, things are not looking better economically for 9 out of 10 Americans." Even the average physician, assuming the ability to save a staggering $4,000-5,000 a month, would have a tough time getting into the 1% at the end of their career.

Change we can believe in? We can still get out of this hole, but it will be tough if the process continues to skew in favor of corporations and the wealthy. Both parties are guilty of pandering to the rich, but the GOP is taking 1%er budget priorities to a whole new level.

For example, the left-leaning Center on Budget and Policy Priorities estimates that 69% of the cuts in Rep. Paul Ryan's (R-Wisc.) 2014 budget, which slashes $5.2 trillion in spending over 10 years, would come from the lower end of the income spectrum. While Ryan claims his budget will end corporate welfare, the vast majority of cuts will come from nondefense discretionary spending — specifically anti-poverty programs, Medicaid expansion, unemployment benefits, the Affordable Care Act (ACA), food stamps, etc. And there's no plausible way to plug the revenue hole his budget creates without substantial cuts to Social Security and Medicare.

In other words, the GOP plan is to radically reform the budget by cutting out all the parts working- and middle-class Americans rely on.

Members of the Republican Study Committee think he's not cutting enough and want $7.4 trillion to go out the window. On the other hand, the Democratic Party's budget (while far from a leftist wish-list) raises the minimum wage to $10.10, gives federal spending on infrastructure, education and scientific research a boost, overhauls immigration, extends emergency unemployment insurance and keeps cost-lowering reforms like the ACA intact.

The countries ranked highest in social progress are doing the complete opposite. They're investing in schools rather than drones. They're expanding collective bargaining laws rather than busting unions. They're providing their citizens with universal healthcare and education rather than selling these basic human rights to the highest bidder.

We can continue down a path that will make the U.S. a second-rate country within a generation or we can invest in our future and work to raise the standard of living for all Americans regardless of their class status. Which way will America go?