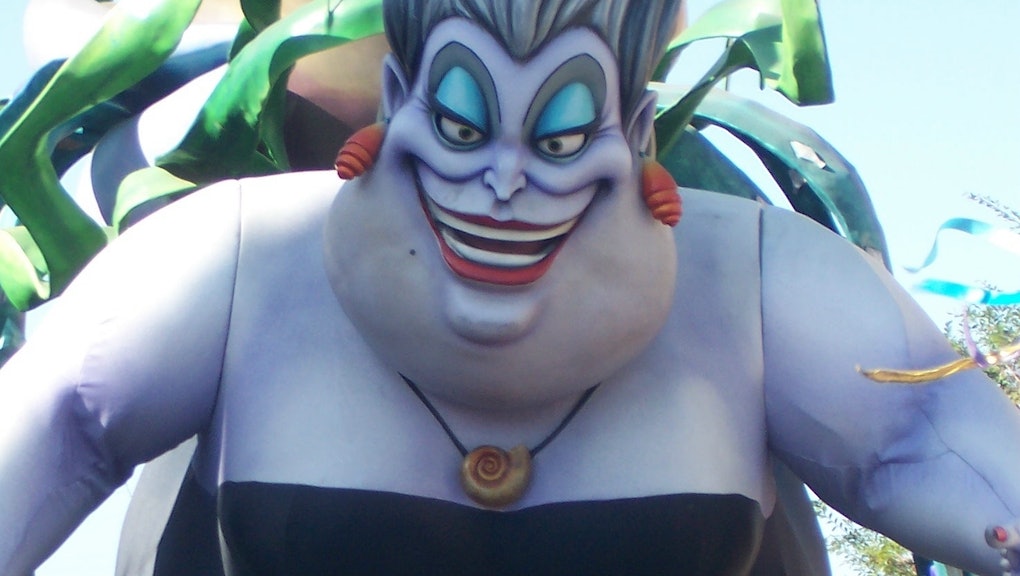 The Problematic Disney Body Image Trend We're Not Talking About

Disney slimmed down its curvaceous crooks for a line of "Designer Villains" dolls sparking harsh criticism when the limited-edition ladies were released in 2012. These included Ursula from The Little Mermaid and the Queen of Hearts from Alice in Wonderland. Two years later, the issue has resurfaced thanks to a damning dram of slam poetry.

Performing at the 2014 Women of the World Poetry Slam, Melissa May shared her frustration and disappointment with Disney for hacking inches off Ursula's waist. In an ode to the sizable sea sorceress, May says, "While you may not have had the waistline of a princess, I'll be god-damned if you didn't have the swagger of a queen."

May laments that Ursula's "silhouette [was] robbed of every ounce of delicious curve," asking whether Disney sat her down over a cup of tea to explain the marketing technique as "a vehicle to make you more palatable to a culture that demands perfection."

This isn't the first time Disney has been slammed for fat-shaming. In 2012, the company launched a short-lived game at its Epcot theme park in Florida called Habit Heroes, which allowed kids to fight the evil villains Glutton, Lead Bottom and Snacker. On her Dances With Fat blog, Ragen Shastain wrote, "Disney is supposed to be the happiest place on Earth and now fat kids — who are subjected to a barrage of shaming, humiliating, stigmatizing and bullying messages from society on a daily basis — will go on vacation and find out that people who look like them are villains who other kids fight for points and bragging rights."

Meanwhile over at Salon, Mary Elizabeth Williams pointed out the irony of Disney using shame to tackle bad eating habits in the very place it entices children to "satisfy your sweet tooth at Storybrook Treats" and offers them menus laden with sugary and fatty foods.

The Habit Heroes exhibit closed just three weeks after its soft launch (it has since relaunched with a kinder approach), but Disney is guilty of a decades old body-image problem — simply put, of presenting thin as good and fat as bad. Note that both Ursula and Alice in Wonderland's cruel matriarch, the Queen of Hearts, are villains, while the heroines are systematically portrayed as disproportionately skinny, white and wide-eyed beauties. Even Frozen, the recent Disney blockbuster lauded for its progressive take on love and its inclusion of a clumsy, awkward princess character, failed to break the slim-waisted, tiny-toed mold; Princess Anna's eyeball is even wider than her arm.

Hollywood is similarly guilty of its non-representative portrayal of women, but Disney — as the most iconic and influential of children's storytellers today — should be held to a higher standard in terms of the morals and ideas it promotes. With great power, and all that.

Indeed, a survey from 2009 found that a third of girls under the age of six admit to worrying about being fat, and when asked to select the "real princess" from a choice of ballerinas, 50% of the girls chose the thinnest one.

The lack of full-bodied (or even normal-sized) heroines in Disney movies prompted Jewel Moore, a high school junior from Virginia, to start a petition earlier this year, urging Disney to create a plus-size princess. "I know many younger plus-size girls and women who struggle with confidence and need a positive plus-size character in the media. I want there to be a character for those little girls to look up to," she wrote on the petition:

If Disney could make a plus-size female protagonist who was as bright, amazing, and memorable as their others, it would do a world of good for those plus-size girls out there who are bombarded with images that make them feel ugly for not fitting the skinny standard."

It's the same reason slam poet Melissa May uses to criticize Disney for its dramatic slimming of Ursula — one of the few curvy villains with any agency. "You were the only Disney character who ever looked like me," she lyricizes to Ursula. "You made back fat look fucking sexy. You made living in this body a little less like a curse."

Even though Ursula is not The Little Mermaid's heroine, May claims her as a role-model for plus-size and powerful women. Ursula's size is not seen as ugly and cumbersome, as it is for The Queen of Hearts; a sign of buffoonery, as it is for Robin Hood's Sheriff of Nottingham; or a symbol of greed and pure wickedness, as it is for Pocahontas' Governor Ratcliffe. Instead, she glides around her lair with grace, owning her sexuality and revelling in her power.

"I want every little girl to see a heroine in a size 24 Ursula. Queen of the ocean, you were never just a witch to me, you were perfect. Every pound, every inch, every swell. Perfect. And I pity the poor unfortunate soul who would dare paint you as anything less."

Despite the backlash from its Ursula doll makeover in 2012, Disney tried a similar trick last year by knocking a few dress sizes off the doll version of Merida, the princess from Brave. In the movie, the Scottish heroine had a normal figure, fly-away red locks and a tomboyish personality. Even the character's creator, Brenda Chapman, criticized the doll's glammed-up redesign (on the right, compared to the original on the left).

Fat-shaming — the demonizing or humiliating of overweight people — is never appropriate. Obesity is a dangerous health risk, but so is propagating unnatural thinness as an ideal — particularly when it comes to children, who have less control over their diets and are more likely than adults to take criticisms to heart. The social stigma associated with the overly plump so often comes from aesthetic disgust rather than health concerns.

By slimming Ursula for the "Designer Villains" doll line, Disney is essentially saying that it's okay to be bad — the evil villains are glamorous, high-end fashionistas — but fat? Definitely not acceptable.

Amy Schumer got to the heart of this issue earlier this week on her eponymous comedy show by poking fun at women who associate food with shame and see their eating habits as moral transgressions. "I was cyber-bullying my niece on Instagram the other day, and I literally ate 15 mini-muffins. I'm so bad," one says. "Yesterday, after I melted my gerbil to see what sound it would make, I ate a ball of mozzarella like it was a peach. I'm so bad," another adds.

Disney seems to be making real progress in terms of its portrayal of real women: The Princess and the Frog's Tiana is a hard-working, no-nonsense independent woman, Brave's Merida is a weapon-wielding athletic tomboy, and Frozen's Anna is an inelegant, fearless teenager. It's just a shame that Disney's take on body image lags so far behind.